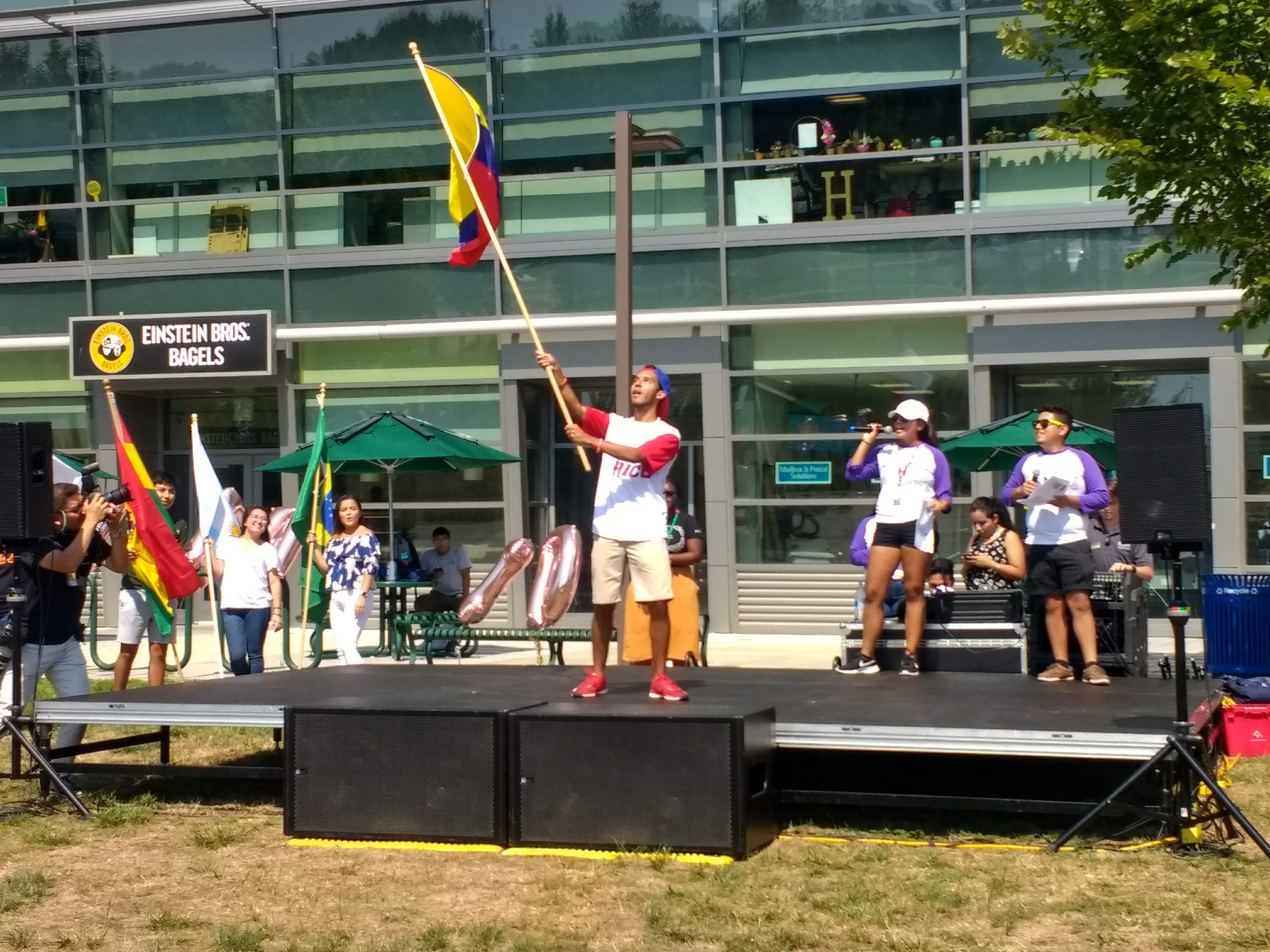 As Bievienda Latina began this year, Hispanic music was blasting. Shiny pink balloons spelling out the event’s name on Merten Hall’s quad were visible near the stage. “Buenas tardes, George Mason University,” one of the announcers said on stage. The event held each year to kick off Hispanic Heritage Month at Mason had begun.

When Hurricane Florence threatened Northern Virginia over a year ago, Mason did not cancel classes. However, in an email sent to update students about Florence, outdoor events were mentioned to be potentially moved, canceled or postponed. On a poster that can be seen on ODIME and LGBTQ Resources’ website, it stated that the event would be postponed, with more information to follow.

The kick-off was eventually canceled entirely.

This decision was the beginning of problems in some organizations. The Hispanic Latino Leadership Association (HLLA) were not able to rebook many of the events cancelled because of Florence. In Hispanic Student Alliance (HSA), members began to distance themselves from the group after it was cancelled.

“Some of them were seniors, and they were really sort of kinda disappointed ’cause (sic) that was their last Hispanic Heritage Month celebration,” HSA President Nelcy Rocha Meneses said.

Hispanic Heritage Month’s slogan is simple: “Unidos por cultura.” United by culture. It’s also the main slogan of HSA this year. Meneses saId they hope to support each other instead of arguing and fighting, or developing damaging cliques that would harm their relationships both inside and outside the group.

For Meneses, the slogan also means no matter where someone comes from or what their background is, the Latinx community can still come together and support each other because of the culture they share.

“There will always be some argument, but there shouldn’t be [because] we’re here together,” Meneses said. “We have to support each other instead of having to fight against each other.”

Hispanic Heritage Month is officially recognized nationally from Sept. 15 to Oct. 15. It aims to celebrate the Hispanic community, as well as to bring people together to celebrate their heritage, traditions and way of life.

Although ODIME and LGBTQ Resources did not host the event this year, they also sponsored it and were present at the event.

“You can see the culture,” the retention chair of Mariposas Mentoring Program, Michelle Ramirez, said.

“You basically get an insight of what the Hispanic culture is about, and everybody does their little performances and it just gets you excited.”

For many, it was the first time they were able to attend. It was Meneses’ first Bienvienda Latina, as she transferred to Mason from NOVA in fall 2018. She wasn’t alone. Many other members of  different organizations that supported the event were also there for the first time this year.

“Last year I was a freshman, so I had been hearing about this event and it seemed so much fun, so I was actually kind of sad that it was canceled due to weather and stuff like that,” DREAMers public relations chair Katherine Trejo said.

“But being here now, seeing all the orgs set up, hearing the music that I usually listen to with my friends or by myself, it feels so much fun, and I’m excited to see what it looks like once everything starts.”

Besides Bienvienda Latina, the Mariposas Mentoring Program and Águilas Mentoring Program are partnering to host a Hispanic dance lesson called New Steps, New You on Sept. 19 from 6:30 p.m. to 8:30 p.m. Along with several other organizations, Mason DREAMers is holding its 9th Annual Immigration Monologues on Oct. 12 in the JC Cinema.

HSA will host the Hispanic-Latinx iCafe, which is a collaboration with the International Programs and Services Office. They’ll have drinks, snacks, samples of food representing countries like Mexico and Bolivia and a table dedicated to the different kinds of tea in Central America, South America and the island countries.

These events, as well as Hispanic Heritage Month itself, are important to the members of the organizations. Trejo and Meneses both emphasized that they hope other members of the Hispanic community feel they are not alone.

Ramirez continued, “And we need to help them explain what their culture is about … There’s other people that look like you. And you should be proud of how you look, where you come from, what language you speak as well.”