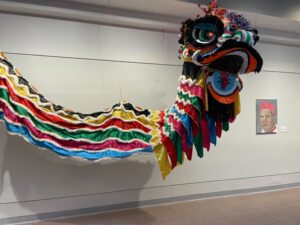 On Thursday, April 21, UndocuMason held a one-day-only pop-up art show in Merten hall. The event served as just a peek at the diversity, history and community that UndocuMason so strongly believes in, advocates for and represents. A single day for a small-scale art show where an array of cultures was transformed into tangible vision by fellow Mason students as well as from immigrant artists across the country.

The group held this pop-up art show as an interactive and creative way for the organization to display the immigrant experience through art. The artists involved had crafted different forms of art through paintings, sculptures and even clothing and jewelry, and were able to showcase those works.

Freddy Lopez, UndocuMason’s Internal President, hosted this art show along with his executive board to celebrate their annual “Undocu Month,” celebrate the funding they receive from Mason, and to cherish the achievements they have had since the start of their organization.

“We wanted to do something that raised awareness of the different issues and ways that immigrants across the country have shown resilience….but we wanted to do it in a way that showed our creativity and our ingenuity,” says Lopez. 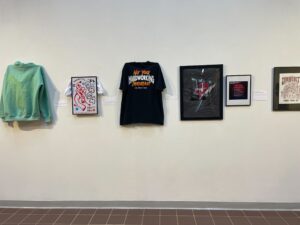 This was UndocuMason’s first time doing a pop-up art show, and it was a success.

The show also featured pieces from existing shops founded and run by immigrant artists who displayed current and newly made art pieces for the show, including Adelitas Apparel, Illegal Drip, Yamz World of Color and GGHOELD.

Next to each art piece, the audience was given an opportunity to “tip” the artists, alongside information about the featured pieces’ online shops so viewers could potentially purchase art from that artist.

The pieces represented a lot of creativity that the artists conveyed through a variety of different forms. There were paintings of some artists’ late family members, there were whole sculptures such as the “Dragon Lion,” which caught everyone’s attention as they walked into the show and earrings by GGHOELD shaped like mangoes and mushrooms, which were the artist’s first commission piece.

As happy as this occasion was, there were also heartfelt messages that the artists communicated with their own experiences, like one painting about moving from Venezuela to the United States and the hardships the artist had faced as a young child. There were also pins and stickers made by some featured artists with distinct writings, all surrounding the message of healing one’s inner child.

The show was an inventive way to not only showcase art itself and allow the artists to market their work, but to also embody the immigrant experience in a creative form.

WHY DO PEOPLE CHEAT?