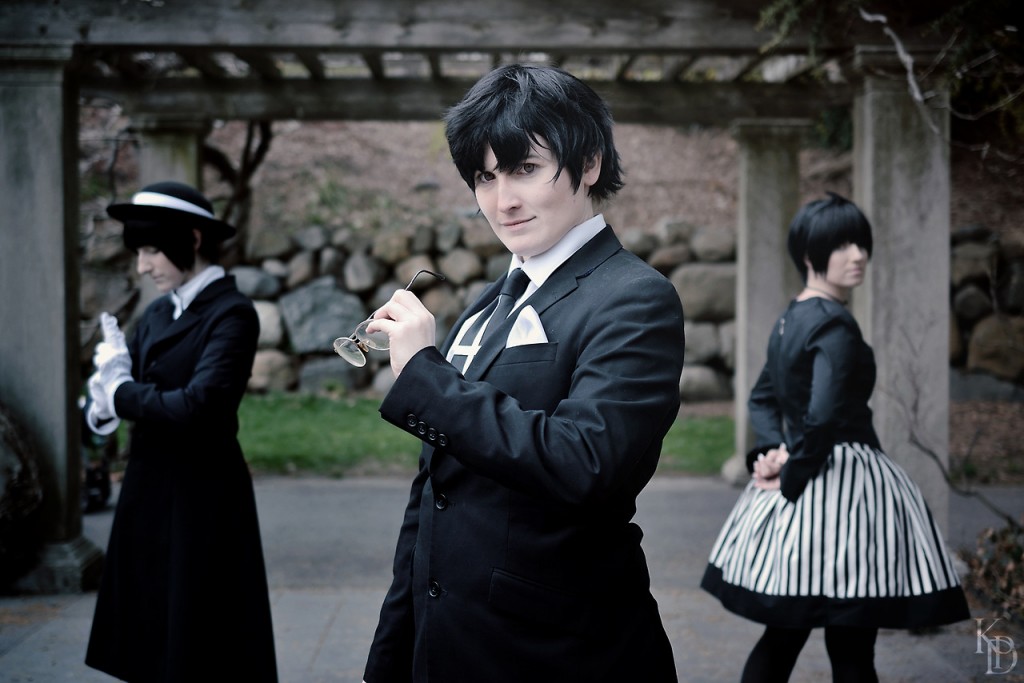 Cosplay, a fusion of the words “costume” and “play,” is a term used to describe the act of constructing or putting together costumes meant to represent characters from pop culture. ”Cosplayers” may exhibit their costume creations at conventions, fan meet-ups, competitions or performances. 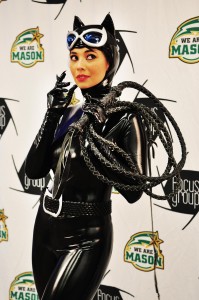 Margie Cox, a special guest to the masquerade, impresses the photographers with her amazing combination of elaborate costuming and photogenic poses. Photo by Claire Cecil.

Sarah Parrott, a sophomore and the Geek Week special events coordinator, was first inspired to cosplay after attending San Diego’s Comic Con when she was in middle school.

“Cosplay allows me to showcase my craftsmanship as well as to show my love for these characters and fandoms,” Parrott said.

For junior Laura Bingham, cosplay is equally as important.

“Cosplay is a way to become part of something you love. To embody a character from a piece of media that has touched you is something of a love letter to that respected series,” Bingham said. “It’s a way to show your pride in and enjoyment of the source material and can allow you to meet other individuals who have been inspired by experiencing the same media.”

The numerous pop culture conventions are also great opportunities for fans with shared interests to gather and form friendships with each other. Freshman cosplayer Darcy Capps also enjoys the sense of community cosplay can create.

“I really enjoy meeting new people who are also into the same things that I am,” Capps said. “Bonding over a costume can be a really great way to make a new friend.”

Cosplay is not always just about the “play,” and sometimes it can be a lot of cos-work. Elaborate costumes may take many hours to finish and can require advanced construction skills.

“I’ve made cosplays in 2 weeks, but on average, I’ll spend half a month planning it and a month actually working on it,” Capps said.

The costuming process may differ from cosplayer to cosplayer, and for each individual project.

“There are some [costumes] that I’ve built on store-bought items which required only limited alterations, so one day of shopping 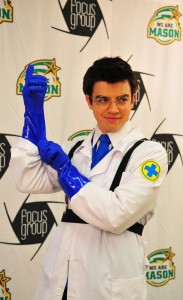 Keegan Hershell shows off his villainous poses as Blue Medic, his cosplay of choice for the evening. Photo by Claire Cecil.

and sewing is all they take.” Parrott said. “Then there are more complex ones where I create my own pattern or alter an existing pattern, then make muslin mock-ups, and then build the actual piece. Those can take four or five full days of serious work.”

Cosplayers are not limited to a specific group or skill level. Though there are those who cosplay on a professional level, most cosplayers are simply fans of comics, video games, animation and other facets of pop culture who wish to express themselves through costuming. Such fans often come together at conventions such as San Diego’s Comic Con and Baltimore’s Otakon.

“My favorite tip to offer beginners is to have fun! Don’t be scared to put yourself out there,” Parrott said. “Yes, it can be really intimidating with the masters in the room, but as long as you’re having fun, that will show.”

“You don’t always have to make the outfit a perfect replica of what you’re cosplaying. Cosplaying is about taking something and making it yours,” said senior Sarah Metcalfe, who has been cosplaying for nine years. “Just because someone else has reached a high level, it doesn’t mean you can’t. Everyone starts out as a beginner.”

“The best advice I can offer is to beginners is to find something fun and run with it. If you don’t enjoy sewing, then by all means, hot glue to your heart’s content. Some cosplayers even opt to purchase their costumes as opposed to making them.” Bingham said, “Like with many hobbies, there is no one correct way to cosplay. In a hobby with so many facets, beginners should explore what they enjoy and hope to gain from cosplaying.”

In recent years, cosplay has enjoyed increased popularity worldwide. It is especially popular in Japan, which hosts the annual World’s Cosplay Summit where 18,000 attendees come from all around the world to see their favorite cosplayers compete for the title of Grand Champion.

“I hope everyone — from hardcore geeks to those who have seen a Marvel movie or two — will come participate in Geek Week. Geek culture is having a significant impact on popular culture, and we’ll be having great panels and screenings that will discuss that impact from multiple points of view,” Parrott said. “I also encourage everyone to step out and try cosplay. You might find a new passion, just like I did.”

Students move back to Piedmont after residence hall flood