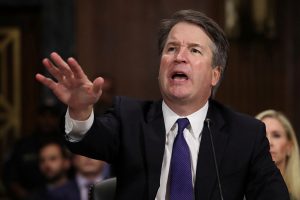 According to an anonymous source within Mason’s Office of the Provost, Supreme Court Justice Brett Kavanaugh is coming to the Antonin Scalia Law School as a distinguished visiting professor.

The document, given to Fourth Estate and dated January 2019, states Kavanaugh’s effective hire date for June 25, 2019. His contract will last for three years and is set to end on June 24, 2022.

Mason’s Director of Strategic Communications Mike Sandler provided Fourth Estate with information on a study abroad class outside of London in Runnymede, England through the law school from July 22, 2019 to Aug. 2, 2019.

The class, titled “Creation of the Constitution,” will be taught by Kavanaugh and law school professor Jennifer Mascott, Kavanaugh’s former law clerk. The class is not listed online in the law school’s list of course descriptions.

Though this is only a small portion of the time Kavanaugh has been hired on to teach as a visiting professor, Sandler stated that is the only class he knows that Kavanaugh will be teaching.

News of Kavanaugh’s hire comes in the wake of student outcry for improvements within the university’s Title IX office and police department regarding increasing sexual assault and harassment on campus. “I’m surprised that Mason would be willing to take this risk,” said the source. “I’m not anticipating a good reaction [among the student body].”

Last fall, Kavanaugh gained national media attention after he was nominated by President Trump to the Supreme Court. During his hearing, multiple women came forward alleging that Kavanaugh had sexually assaulted them. The most notable accusation, coming from Dr. Christine Blasey Ford, resulted in a testimony from both Ford and Kavanaugh before the Senate Judiciary Committee in late September 2018.

Though many Democrats and some Republicans expressed their belief that Kavanaugh was no longer fit to serve as a Supreme Court justice, he was still confirmed to the highest court in the U.S. on Oct. 6, 2018.

Fourth Estate reached out to multiple representatives within the Office of the Provost, who stated Human Resources (HR) would be the best resource for confirming hiring status. HR pointed Fourth Estate to Michael Sandler, director of strategic communications, who encouraged Fourth Estate to reach out to the Antonin Scalia Law School.

Kathleen Corcoran, director of communications for the law school, could not confirm nor deny the hire and pointed Fourth Estate to Alison Price, senior associate dean of the law school. Price did not answer multiple attempts at contact for comment.

Editor’s Note: This is a developing story. It will be updated as more information becomes available.