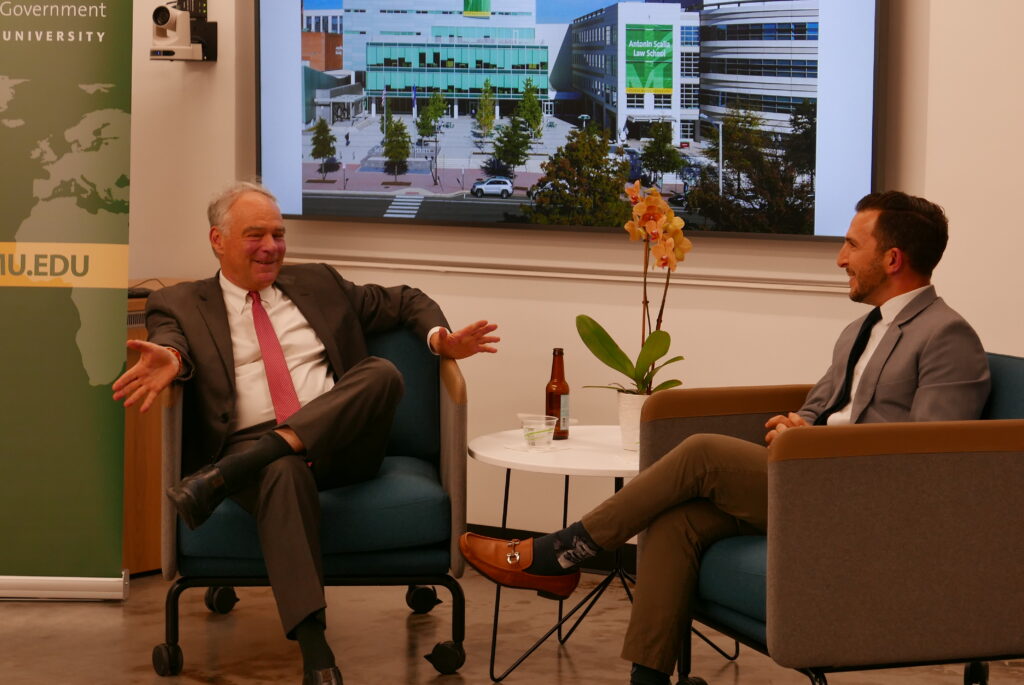 The Virginia Senator was the special guest for a Master of Public Policy Information Session and Bistro.

The Schar School of Policy and Government hosted Sen. Tim Kaine as its special guest for an information session for current prospective Master of Public Policy students. The MPP Bistro is a recurring event hosted at Mason Square by Justin Gest, Associate Professor and Director of the Masters in Public Policy Program at Mason.

Gest and Sen. Kaine had an informal Q&A that covered topics like Schar School graduates working on Sen. Kaine’s staff and how the Biden administration was able to get legislation passed in Congress.

Sen. Kaine stated that the Biden administration has prioritized passing “simple bills”, like The Inflation Reduction Act of 2022, which includes measures like lessening inflation and tackling climate change, over “everything but the kitchen in the sink” bills to be passed and make Congress work.

When asked to elaborate on how Congress can continue to work with the threat of Republicans gaining control, Sen. Kaine hopes to keep Democrats in control by helping where he can. “I’m really focused on two things in the midterms. One, I can’t focus on every state’s House Representatives, with the Virginians I can. And there are three Democratic congresswomen that are really running good races, I know them very well and I’m doing all I can to help, but I’m not on the ballot this cycle. I am doing things to help Senate colleagues around the country…We’ve seen the progress that we’ve been able to get in the last two years, and we can get a lot more. But if we were to lose the House or the other, it would be very tough.”

With National Voters’ Registration Day coming up on Sept. 20, Sen. Kaine stressed the importance of college students voting in the upcoming midterm, “It’s really important and I think events of the last couple of months have really shown what’s at stake. President Biden did student loan forgiveness, which is a really significant thing. He did that, Democrats supported it, the other side didn’t, they don’t want to do that.”

“There are issues on the table right now that affect students, President Biden has responded well to my urging that he dramatically increase the public service loan forgiveness program.”

Sen. Kaine noted the passion of young people in the United States, “Young people are the most passionate in our country about climate issues, [like] The Inflation Reduction Act [of 2022] we just did, which is going to accelerate historic clean energy.”

“I think we learned during COVID the way traditional student loans work,” said Sen. Kaine. “You fill out the FAFSA and it’s a big complicated thing, you [fill out] what the family income is and then you get an award for the year. But it doesn’t take into account if circumstances change, in the middle of the year, a parent could lose a job, or a parent could get ill, a parent could pass away. There could be some other catastrophe and that’s not really how we set up student financial aid to work.”

“We realized that emergencies don’t just happen during pandemics, they happen all the time. So I hope we might be able to find, particularly in a budget bill at year-end, the ability to do that.”