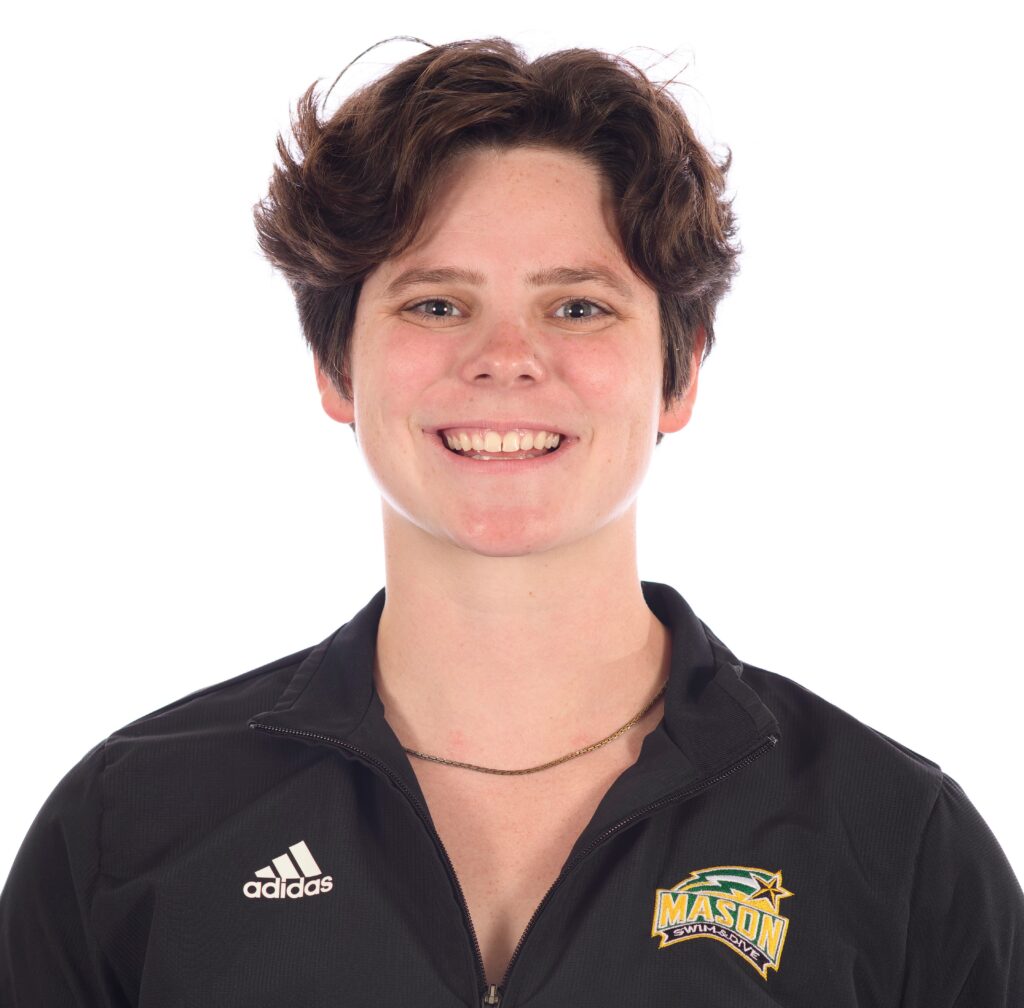 Senior Emily Lewantowicz has spent all her life in the pool. At the age of five, the love for swimming began and has followed her all the way to her senior year at Mason.

The love for swimming didn’t come as a surprise since Emily’s dad also swam in college and the two bonded over the sport.

“My dad swam in college, and we love to talk about swimming together. It is one of the main things that we’ve always been able to bond over. But since I moved here for college it’s hard not having him present like it was back home” said Lewantowicz.

Lewantowicz was given a scholarship for her swimming endeavors which brought her all the way from Louisville, Ky. to Fairfax, Va.

“I got a scholarship when I committed to swim at Mason, it is renewable for all four years as long as you remain eligible to compete and maintain in good academic standing,” said Lewantowicz.

A consistent part of Lewantowicz’s life is her swimming routine and the balance she must maintain.

“Swimming has been a massive part of my life and daily routine, but I try not to let it define me. I think it’s really easy for athletes to place all our worth in our sport, so I try really hard to combat that by placing value in other areas of my life too, for example, school, and my relationships. Professional growth, social life, etc.”

“Swimming will always be a huge part of who I am. It has taught me so much about discipline, dedication, and time management which are skills that will continue to benefit me long after my swimming career”.

Some of Lewantowicz’s favorite aspects of swimming derive from the thrill and friendships formed around the sport.

“I am really excited to get to compete one last time. I love the thrill of racing I think it’s so fun. I love going to travel meets and getting to spend quality time with my friends competing with them and cheering them” said Lewantowicz.

Heading into her senior year, Lewantowicz shares what she looks forward to the most.

“We have a great team this year and I think that we can be really successful if we come together to work towards a common goal. I’m also really excited for senior night on November 19th in the AFC. It will be fun to watch me race and celebrate the four years that I have dedicated to swimming at GMU” said Lewantowicz

Lewantowicz’s swimming has played an important role in her life and has helped shaped her life experiences, but isn’t the only factor doing so.

“I like to think that I wear my identity proudly just by the way that I present (myself). Being a more butch lesbian makes the representation a bit more inherent, I think. But I do go out of my way to talk about my experiences in class or with other people around me because I think that’s really important” said Lewantowicz.

Like a rainbow peeking out of the clouds after a rainstorm, Lewantowicz slowly began to come to terms with her sexual orientation and gender identity.

“When I first came to GMU I actually wasn’t out yet. It took about a week or so and I finally kinda came to terms with it and said something to one of my teammates at the time. It’s been fun to see other people come onto the team and be able to relate to swimming and being part of the LGBTQ+ community” said Lewantowicz.

Although coming out has benefitted Lewantowicz there were also challenges she had to face in officially having a label.

“Most of my pushback came from my parents. I was brought up in a Catholic family in Louisville, Kentucky. It took time for me to really trust them with that part of myself, but I’m glad that I’ve opened up more with them about it despite some of the underlying religious trauma” said Lewantowicz.

Lewantowicz shares her experiences so openly in order to help other students not feel alone and potentially form more friendships or find a community here at Mason.

“I think that for anyone feeling lost or maybe a bit lonely at such a big school like GMU, there are ways to make it feel smaller and more personal. For me, it was engaging with people on my team and forming relationships. I think it’s really all about finding your niche.” said Lewantowicz.