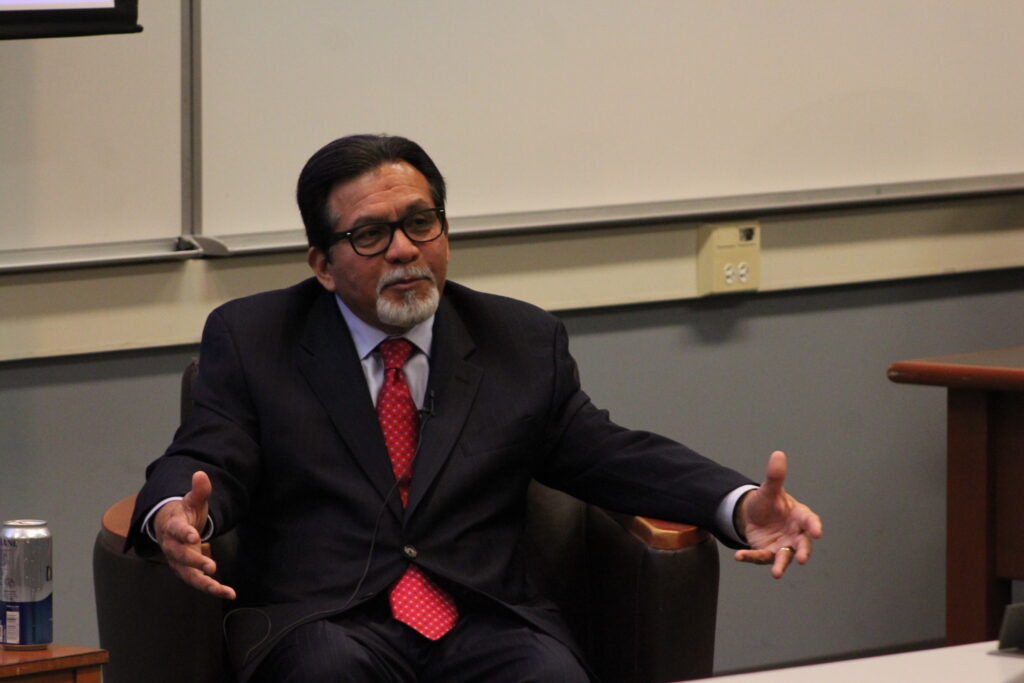 Gonzales discussed his career and gave advice to students.

The event was hosted in collaboration by The Criminal Law Society and the Federalist Society, at Hazel Hall on Oct. 14.

Throughout his years Gonzales served as general counsel to Texas Governor George W. Bush, as Secretary of the State, served on the Texas Supreme Court and in 2005 became the 80th and first Hispanic, Attorney General. Currently, Gonzales is the Dean of Belmont University College of Law.

Following introductions, Gonzales was then interviewed by Professor Craig Lerner on moments throughout his career and asked to give advice to the law students in attendance.

“I tell our students the importance of learning your craft, learning how to be a good lawyer and then giving back to society,” said Gonzales. He explained that he began his career with more than a decade of private practice and was bored. He found public office and working for the government to be more exciting and fulfilling.

While Gonzales found life in Washington to be more exciting, he also found the work to be more difficult. As counsel to President Bush Gonzales advised him on legal matters surrounding Guantanamo Bay, the war on terror, surveillance and other controversial topics.

“I would encourage all of you to reach as high as you can as a lawyer and try to serve,” Gonzales said to the students in attendance. “But understand that the higher you go the more difficult decisions become.”

To explain how difficult the decisions could be Gonzales told the story of the decision behind the FBI raid on Rep. William Jefferson’s Capitol Hill office.

According to Gonzales, while Jefferson was being investigated for corruption and bribery there was a big internal debate on whether or not to raid Jefferson’s office. There was concern that the raid would be seen as politically motivated.

Gonzales’s fear was founded after the raid there was an immense outcry that led to a federal appeals court declaring the raid unconstitutional.

“We thought we were right, the court said we were wrong, and it hurt me politically,” he said.

He emphasized that while he and his team made mistakes the lawyers in the justice department and attorney general’s office work to ensure those mistakes don’t occur often.

Gonzales also briefly touched on what it meant to be the first Hispanic attorney general.

MYLES AND WALKINSHAW FACE OFF IN DEBATE

THE FALL OF YE: HOW A LEGEND DIES