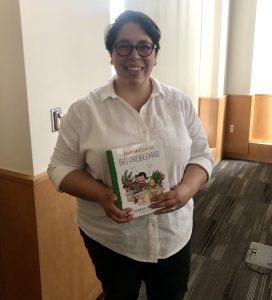 For author, illustrator and designer Juana Medina, a children’s book can mean a lot. Medina is a Colombian-born, Washington-based artist and writer who spent an afternoon discussing children’s literature and much more in Fenwick Library as a part of the College of Visual and Performing Arts (CVPA) Global Arts Coffeehouse series.

The Global Arts Coffeehouse invites an interesting and diverse set of international artists to come and engage audiences at Mason with an artistic conversation that goes beyond the technical, according to English professor Heather Green.

“Dr. Kristin Johnsen-Neshati is the assistant dean of the CVPA and she’s started two new series,” Green said. “One is called Kritikos and one is called Global Arts Coffeehouse, and they’re meant to start conversations about art that aren’t just, like, a painter giving a talk.”

“I’ve known Juana for a few years because her wife Sally teaches in creative writing where I used to teach,” Green continued. “And when I went over to [the] School of Art for my Writing for Artists class, I just thought ‘Oh, wouldn’t it be amazing for them to get a chance to hear from Juana,’ who’s really living in both worlds.”

Medina was born in Bogota and the path to children’s literature was quite circuitous. At multiple oints in the talk, Medina noted that the intent was never to become a children’s author and prior pto publishing, Medina had a career in physical therapy in Colombia.

“I had a very vast imagination, even as a very young child,” Medina said. “I was fascinated with oral tradition in Colombia, which is very rich, and stories — they just captivated me.”

Medina spent some time discussing childhood influences, constructing identity in Colombia and a little bit of the contextual backdrop of instability in 1980s Colombia.

“Throughout this process, my grandfather kept on being my protector. He was a brain surgeon and this gave me a very special understanding and love for the human body, and I wanted to keep this language with my grandfather and for other reasons, I decided to study physical therapy,” Medina said.

But as violence continued to escalate, Medina decided to leave Colombia with no more than $220, eventually landing in the Washington, D.C. area.

“Despite leaving home, my family, my career and not knowing what would happen in my future, I came to this country with a visa on a plane,” Medina said.

While Medina made it clear that there was a landing spot with family in the Washington area, there were also major challenges in making this transition.

“I wasn’t funny anymore,” Medina said. “Even though I spoke the language, [and] I knew the culture, I could not connect. It took me a very long time to gain some understanding of the culture that I was getting to be part of.”

In order to maintain visa status, Medina decided to return to school, this time choosing to pursue a career in art at the Rhode Island School of Design. It was in one of Medina’s classes there that inspired the “Juana & Lucas” stories that Medina is best known for.

“I was once asked during a short, short fiction writing class to — for an assignment — to write a short, short story,” Medina said. “Being in Rhode Island, which was at the time wintery and cold, I could only help but think of my fabulously warm, perfectly 65, 68 degree hometown.”

Since then, Medina has been recognized by the Colombian Presidency, the National Cartoonists Society, the National Headliner Award, International Latino Book Awards and is a recipient of the Pura Belpre Award, an award that honors excellence in children’s literature from a Latinx author and illustrator, for the “Juana & Lucas” series.

“The way I see it, children’s books are more than anything an opportunity to start a conversation,” Medina said. “If you think about children’s books, they are a way to compile a two-hour feature film onto 32 pages.”

Medina continued, “I’m a strong believer that it is stories that make the world go around. When we share our own ugly, imperfect selves and we share our vulnerability is when we finally realize that our stories, which are very personal, are universal.”