Rising tensions regarding a lack of transparency within the School of Art following Dr. Thomas Stanley’s removal resulted in a rally organized by the Mason Coalition of Academic Labor.

The rally, which took place April 23 in North Plaza, featured several speakers including members of MCAL, several of Stanley’s former and current students and Stanley himself.

When asked about the decision to let Stanley go and the staff atmosphere regarding allegations about a lack of transparency in decision making, School of Art Director Peter Winant and Associate Director Sue Wrbican declined to comment.

Prior to the rally, MCAL released scripts for call-ins to Dean of the College of Visual and Performing Arts, William Reeder. The optional scripts addressed several of the issues related to Stanley’s dismissal, many of which were also mentioned in a letter written by Stanley’s colleagues to the administration.

“There’s obviously been a lack of transparency that’s come out of the College of Visual and Performing Arts and, if we care about faculty, someone who’s been here for 12 years really should not be just let go without any sort of reason whatsoever,” MCAL member and contingent faculty advocate Marisa Allison said. 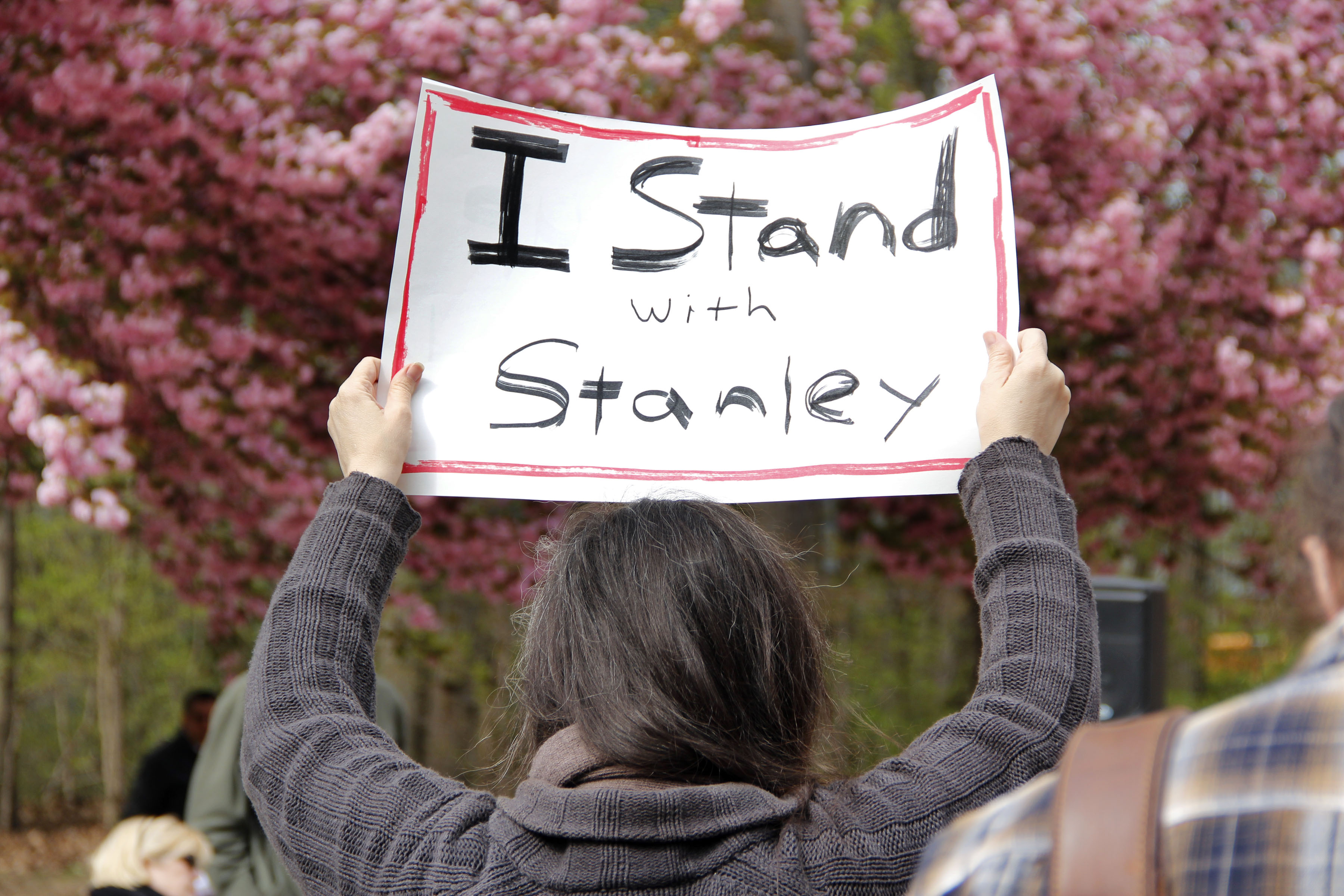 One of the suggested scripts demanded a need for transparency from CVPA administration, reflecting the ongoing debate about the amount of information available to faculty and students. However according to Reeder, the allegations of a lack of information are inaccurate.

“Thomas is a really high quality colleague, and I think it’s completely appropriate for his colleagues to reach out, express their support of him. I have responded, not directly to the letter or to the people but we have our regular faculty meetings which are open to the entire faculty,” Reeder said.

A faculty meeting took place April 22 in which Reeder said he spoke about this situation, however, accounts of the way the situation is being handled differ.

“Yesterday at that meeting I specifically addressed Thomas, the situation, the history. I spent quite a bit of time covering all of the issues, we opened the floor then for discussion. There were a number of questions openly answered, and my door is always open to any faculty member who wants to express an idea or a concern,” Reeder said.

Despite the meeting, there is still disagreement about an appropriate response from the administration.

“I think [Reeder] needs to respond to the faculty letter for sure. I think that the sort of reasons that he’s giving about budget cuts aren’t as transparent as they should be, and so my hope is that because the line was transferred somewhere else, likely, all of that stuff is happening behind closed doors without the voice of the people who matter. So he needs to respond and say where that position went to and why and ultimately I think he needs to give Thomas his job back,” Allison said.

According to Reeder, Stanley’s line of employment being cut was the result of a mandated budget reduction. Stanley is just one of several professors who have been let go within CVPA.

“I can tell you it’s not a decision which you arrive at knowing that it’s not painful. It’s very difficult, but it’s not only transparent, it actually conforms to every standard both legally and per the faculty handbook. You can’t lay people off here without a completely organized institutional process and that was what was practiced here, and we made that completely available to Thomas and to the School of Art so the report of it not being transparent isn’t accurate,” Reeder said.

Despite budgetary reasons, many students within the School of Art continue questioning why a professor as influential as Stanley is being let go. Senior Carmen Judy said she never had a class with Stanley, but he still influenced her as well as the art community at Mason.

“I think from the students perspective, we’re all wondering why a beloved professor who’s great at his job and engages his students outside of his classroom…how can somebody who’s given so much to the program just be dropped without any reasoning?” Judy said.

Despite the ongoing debate, both staff and faculty acknowledge the loss of a minority professor.

“The report of the loss is definitely accurate. I think another important dimension to this – and I agree with this – is the loss of a minority faculty member. I think that’s an issue for George Mason, I think it is an important priority for George Mason and whenever we lose someone from a minority community, I think the loss is severe. And I wish that I had a pot of money to allow me to not do that but we don’t. And I can’t take money away from someone else simply because of that,” Reeder said.

According to the Facebook event page for the rally, Mason is not standing by their commitment to diversity by letting Stanley go.

“…We tout this idea of diversity, yet we don’t actually perform the diversity that we need by losing one more African American faculty member. I think it’s just important that we come together as a public, as a group of people that are part of this university to say that we aren’t going to stand for this anymore. This has happened before, there’s been other faculty members who have been lost out of this department in particular, but I’m sure it’s happening in other places in the university so it’s time we stand up and not be fearful,” Allison said.

The loss of Stanley diminishes representation of the student population among faculty, but some students believe that his perspective, sound art expertise and general approach to teaching will also be major losses.

“The whole perspective that he had, he’s a really unique professor with a really unique perspective and it’s not that the other faculty aren’t also amazing, because they are, but Dr. Stanley is a really unique teacher because he talked about things that I haven’t had other professors talk about,” senior art and visual technology major Julia Douglas said. “There isn’t another sound art professor. For Black students, they can’t necessarily see themselves reflected in any of the other professors so it’s a lack of representation too but mostly just the issues that he talked about that aren’t represented in classes.”