The Art and Design building hosts Off the Wall 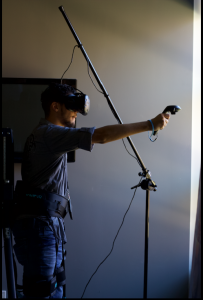 On Saturday, Feb. 22, as part of Mason Homecoming, the School of Art pulled a tremendous crowd into the Art and Design building for their annual Off the Wall event. From 2 p.m. until 5 p.m., the building was filled to the brim with students as well as alumni and parents coming to view all the amazing student creations.

From the top floor to the bottom, rooms were filled with the art that students from multiple disciplines put hours of work into. The artistic creations appeared in great variety, from portraits and paintings to interactive art, with virtual reality apparatuses and even a halfpipe set up behind the building.

One of the rooms that seemed to draw a fair amount of passersby was the new media section, overseen by Gail Scott White, a professor in the School of Art focusing on new media art and animation.

The room was visually stunning. Every computer in the room was turned on and played an animation or film project that a student created specifically for the event. Some of the animations confronted viewers with very deep messages and others focused on lighter subjects. There were also projects that incorporated both film and animation, resulting in very interesting final products.

White was very enthusiastic about all of the artwork created by students at Mason. When asked what she thought was most important, White responded, “Friend-making, you know? Like really trying to connect with the larger community.”

“We have a terrific program and we’re growing like crazy,” White said. “For me, it’s really being able to connect with other people and show them what they’re doing.”

Victor Shenouda, a biology major who was showcasing abstract sculptures during the event, talked about how seeing people appreciate his art was important to him as a student participant.

“The value of the time I put in and seeing people appreciate it,” he said. “It’s so easy for someone to look at it and be like ‘I don’t get it.”

The event is a great opportunity for artists to interact with an audience that can understand and appreciate their work.

In addition to the multiple showcases, there was also an interactive art area that allowed attendees to paint anywhere in the room or even throw balls full of paint at a student standing against the wall. There was also a portrait section where student artists drew attendees in many different styles. On the opposite side, students drew what was most urgent to them, such as violence in the LGBTQ+ community.

Off the Wall incorporated so many different styles and mediums of art, one wouldn’t know where to start. The event showcased the tremendous talent that exists at Mason.