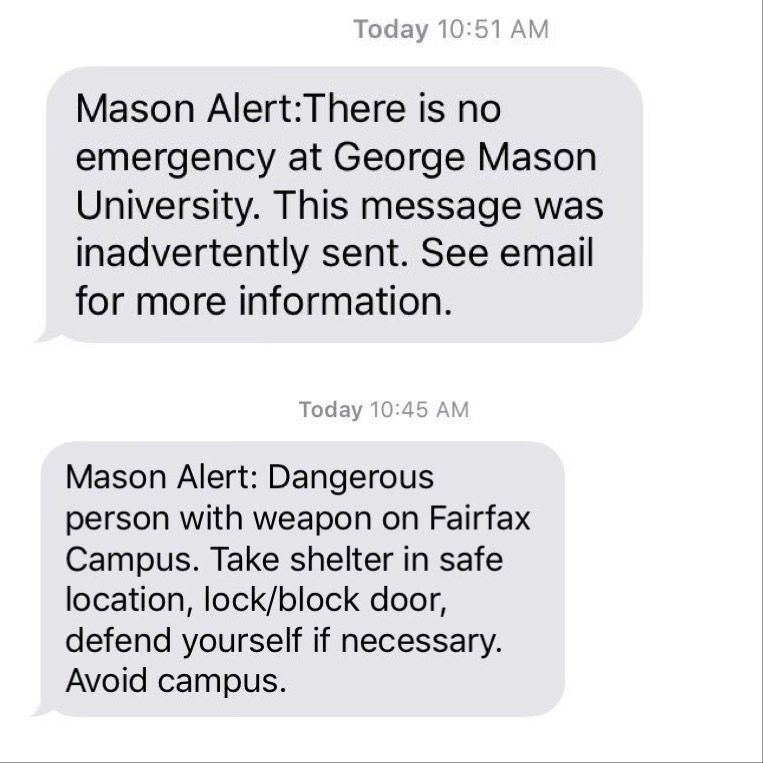 The false alarm for an active shooter at Mason on Aug. 20 was a horrible mistake that rightfully scared students who were on campus at the time. As a student myself, I call on the university to look at the process it has for such alerts and make sure a mistake like that doesn’t happen again. False alarms harm the believability of true emergencies, so tightening up alert systems is a very important part of keeping people safe.

That all seems pretty obvious to me. What’s more interesting is the reaction to the false alarm. The reaction made me think of Aristotle.

For example, look at the opening paragraph of this article. I begin with an appeal to emotion (pathos) by expressing sympathy for the students who were on campus and saying they were right to be scared. Next, I appeal to my own credibility (ethos) by noting that I am a student, so I have a stake in the well-being of the Mason community. Finally, I appeal to logic (logos) by mentioning the harmful effects of false alarms.

That’s not to say it’s a perfect argument. Maybe I should have started with ethos, or maybe I should have used a different appeal to logic, but all three points on the rhetorical triangle are represented in balance, so it at least passes the smell test.

The same cannot be said for the response of Mason’s chapter of Students Demand Action (SDA), a gun-control advocacy group. I’m going to pick on them specifically here, not because I have anything against them, but because they provide a good example of my larger point: the gun-control movement fails to persuade because it relies too heavily on pathos at the expense of logos and ethos.

Their statement is representative of a larger response on social media that failed to logically convince a wider audience.

SDA’s statement was issued very quickly after the false alarm, and it shows when you read it. The statement contains numerous grammatical errors, tense confusion and typographical mistakes, but the real indicator is how angry it reads. It’s outrage at the expense of logic and credibility.

The statement says, “This incident only shows a lack of understanding and seriousness around the issue of violence…”

Logically, this is not true. If Mason did not take this issue seriously, it would not have an alert system for this issue.

If Mason did not take this issue seriously, it would not have a police department with over 135 employees, over 50 of whom are sworn police officers. What this incident shows is that someone made a mistake, and we should figure out what that mistake was so it doesn’t happen again.

Another logical problem is at the end of the statement, which says that “out of respect for survivors of all forms of violence…the only accountability that is fair is a demotion of the employee who mistakenly sent this out.” This is a non sequitur. In no way does it follow from the fact that survivors of violence exist that the “only accountability” is demoting someone.

The bigger flaw in the statement is the lack of ethos. One of the most important parts of having credibility with your audience is telling the truth. That means reporting the facts correctly. The statement was sent at 11:41 AM. If Students Demand Action had waited just nine minutes, they could have read the 11:50 AM message from the university that reported the facts.

A Mason employee did not send the alert. Mason cannot demote someone it does not employ. That little fact torpedoes SDA’s demanded action, and the volley of supporting social media posts.

Another facet of ethos is engendering goodwill. This statement does exactly the opposite by demanding someone’s career be harmed. The statement concludes the demotion of the (fictitious) employee is necessary “as we can see that they are not equipped to handle the system.” That’s a pretty harsh standard.

We aren’t talking about someone in the public eye who is subjected to criticism as a matter of course. This was just someone with a regular job who made a mistake. I don’t think anyone would want to be demoted for making one mistake.

If I were to apply this standard across the board, I would be demanding the demotion of whomever wrote this statement for SDA because I “can see that they are not equipped to handle” writing statements. However, it seems that this statement was a mistake made in excessive haste, which is understandable.

I used SDA’s statement as a foil, but there were many other statements on social media that made similar points, and the statement really is illustrative of the rhetorical posture of gun control advocates in America.

It’s too much emotion, not enough logic or credibility. You would think that a movement that constantly points out Americans own more guns than any other people on earth would realize that means they need to persuade a lot of people to get the reforms they desire.

Though Aristotle wrote thousands of years ago, his writing about rhetorical strategy is still true today.

Gun control advocates: if you want to persuade people who disagree with you, balance the outrage with appeals to logic and credibility. If you want to create outrage for its own sake, stay the course.