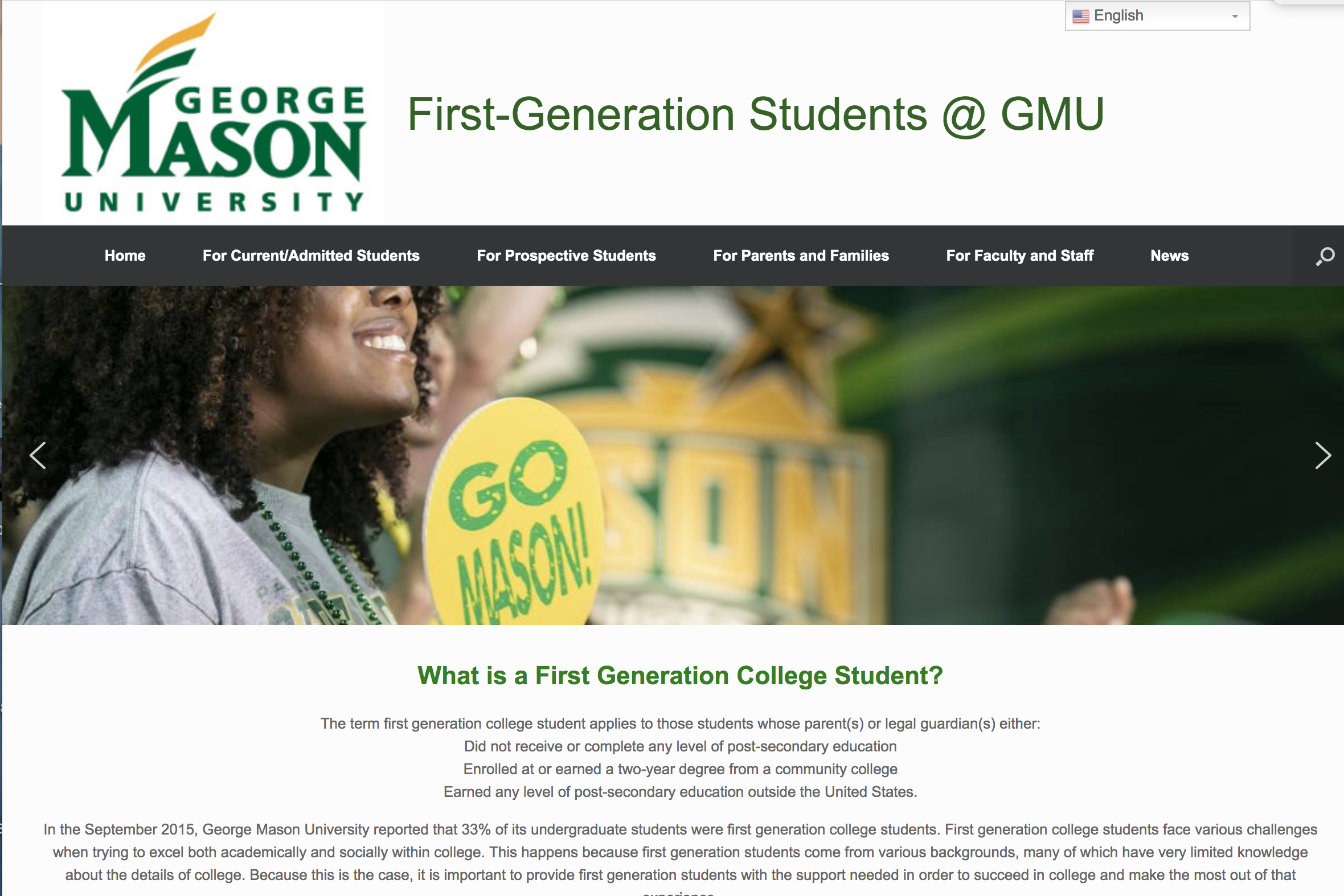 A 2015 research study showed that 33 percent of Mason undergraduate students were first-generation, according to the homepage of firstgen.gmu.edu. The website, which launched in March, aims to help first-generation students and allies like parents, faculty and staff.

Completely and uniquely tailored for the Mason community and prospective students, firstgen.gmu.edu has years of research to back it up and is a very informative resource for Mason Students.

“It was a long road to get to this very tangible [and] actionable support resource for students,” said Dr. Graziella McCarron, assistant professor in the School of Integrative Studies (SIS).

In an effort to bring a higher level of awareness to the term and definition of “first-generation,” McCarron was accompanied by a web-development sub-team within the SIS, working alongside Misty Krell, Sharrell Hassell-Goodman, Beth Dalbec and visiting intern Chris Garner.

The SIS team worked to include findings from a research study, which serve as the core for the newly formed website. The research team, led by SIS’ Dr. Julie Owen, collected analytics and data as early as 2016. The team was comprised of faculty, graduate students and undergraduate students focused on first-generation well-being on campus.

Christian Suero, a doctoral student studying sociology at Mason and a first-generation student, was a part of the initial research team.

While the team collected research, Suero said it was important for them to also have something deliverable down the line, something that would consolidate the information and data. As time passed, the idea of creating a website came to mind.

McCarron shared that she did not think she would ever see this kind of resource for Mason’s first-generation community develop so quickly and so successfully. But the SIS team worked long and hard collaborating with the Office of Diversity, Inclusion and Multicultural Education (ODIME) + LGBTQ Resources and F1rst Gen Mason. They developed a website seeking to aid current students, prospective students, parents, families, faculty and staff.

“By creating a website, I think it’s allowed for an opportunity to help expand the opportunities for those who identify as first-generation [who] traditionally wouldn’t have these forms of capital,” said Suero.

Suero also noted that a website is able to “provide a visibility of resources,” giving first-generation students a better chance to see what options are available to them.

With their ability to answer students’ questions, McCarron said that feedback from the first-generation community allowed them to integrate tools like accessible website translations to more than 15 different languages and dedicated tabs for students, families and staff.

“We have this very vital and vivid way of being helpful in real time with students who are living the experience [and] with faculty and staff who want to support them,” said McCarron.

Gia Ha, senior civil engineering major and president of F1rst Gen Mason, says that even just getting the term “first generation” out there can give people a better understanding of that identity.

“I think it’s so inspiring to see so much coming out for first-generation college students, even though I am on my way out,” said Ha. “I am really happy for all the freshmen and underclassmen who get to see all of these resources developing.”

Along with the work of the SIS team for the creation of firstgen.gmu.edu, Ha also shared that other campus resources like the Leadership Education and Development Office (LEAD) are similarly working toward visibility and awareness of the first-generation community.