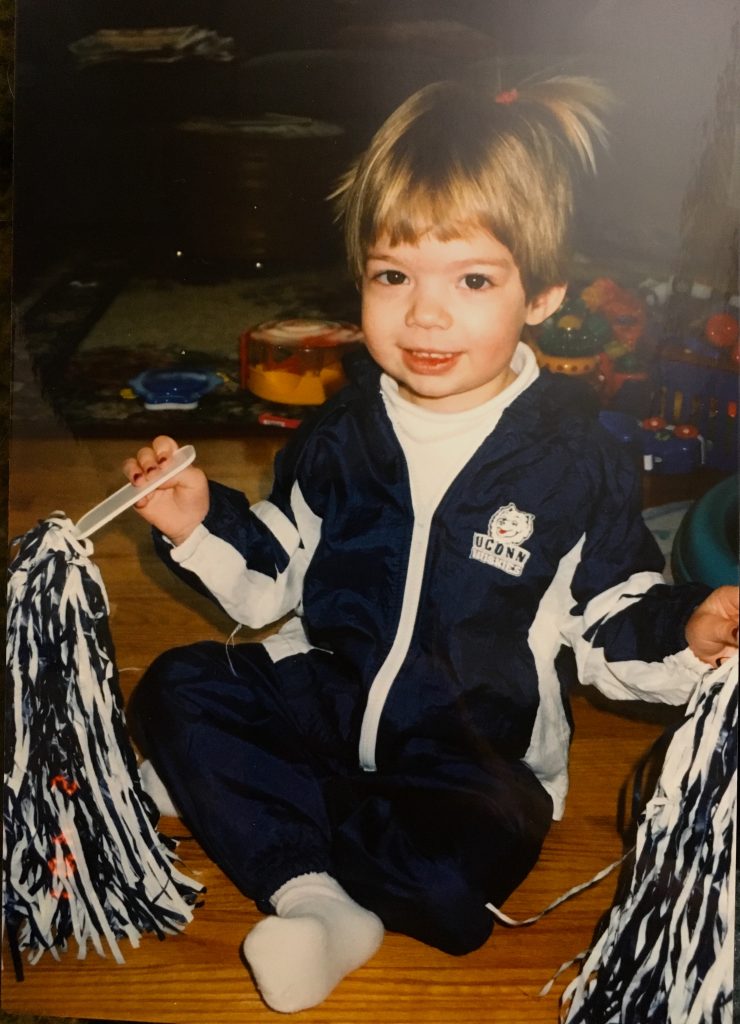 Thank you. I’ve had the joy of watching you since I was only a few months old. When I was born, my parents still regularly attended University of Connecticut Women’s Basketball games. They used to put me in my UConn windsuit, hand me some pom poms and take me with them. 19 years after my parents started taking me to games in my snowsuit to keep me warm, my love of the game continues to grow.

Taking a few steps backward, my mom played basketball on her high school’s first girls basketball team in 1978, six years after Title IX was passed. She went on to play basketball, field hockey and softball at the Division III level.

In the early 1990s my parents began closely following the UConn Women. This was before the fame and 11 National Championships, but they were beginning to gain more attention.

I was lucky enough to get that love of the game passed down to me. I’ve been watching UConn for as long as I could remember, so of course when I showed an interest in learning more about how the sport of basketball worked my dad turned on UConn. For most of that season, we only watched the women’s team until I had a solid grasp of the fundamentals and the importance of passing and teamwork.

After that, we would watch almost every game, men’s or women’s, that UConn played. However, for me, watching the women play was always different. The quality of play was better, I loved the continuous passing and teamwork and once 2012 rolled around… there was Breanna Stewart.

Stewart, or as I, most of Connecticut and now most of the country knows her, Stewie, was the first basketball player I fell in love with. Watching her grow and develop from an awkward freshman to a four-time NCAA Basketball Tournament Most Outstanding Player and four-time national champion was an extraordinary experience. She went on to win Rookie of the Year in 2016, WNBA MVP, as well as WNBA Finals MVP and WNBA Champion in 2018.

In the last year, I’ve started covering Mason women’s basketball, including Natalie Butler’s historic season, and have started following the WNBA more closely. This summer I went to see the Washington Mystics play the Minnesota Lynx and the Connecticut Sun play the Chicago Sky.

I’m writing this less than an hour after Game 3 of the WNBA Finals wrapped up in EagleBank Arena in front of a sold-out crowd.

I was sitting on a plane at a gate at a Chicago airport at the time, but if I was not I would have been one of the first ones to buy tickets to support the sport I love.

On Memories and Reminders