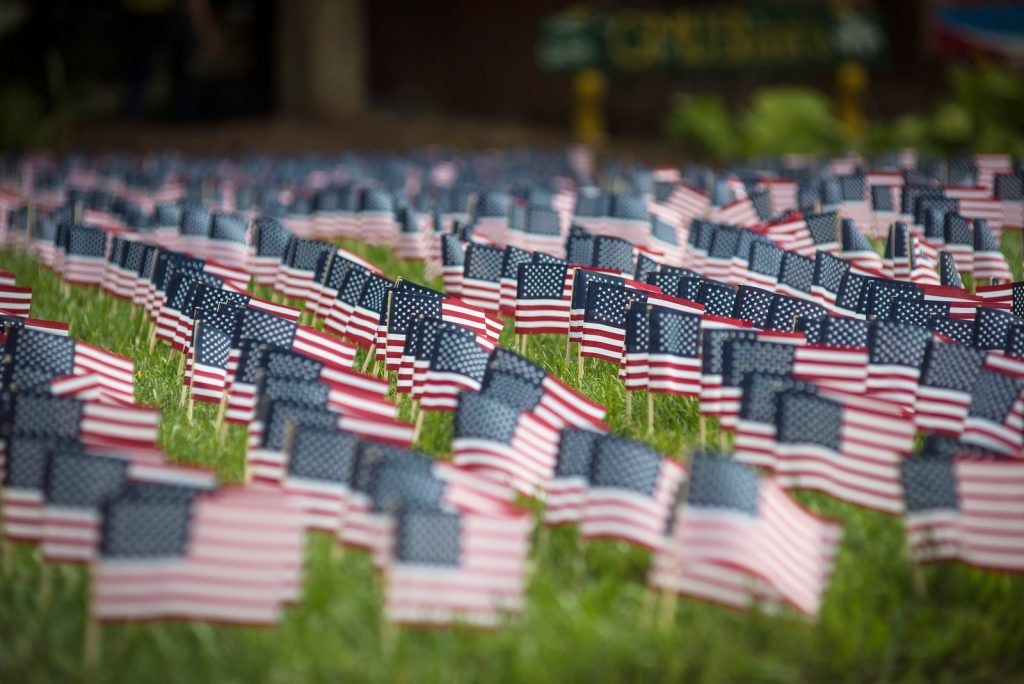 Mason IFEPM (Independents for Female Empowerment and the Promotion of Equality, Humanity, and ADA Compliance) volunteers sponsor an American Flag Memorial to raise funds and awareness for the Families of Freedom Scholarship Fund on 9/11 Service Day. photo by Evan Cantwell/Creative Services/George Mason University

As a sophomore, I am a member of the first class to attend this university that does not have any memory whatsoever of the terrorist attacks which occured seventeen years ago last Tuesday. Some members of the Class of 2020 may have been old enough to have a faint recollection, but my classmates, I and all the students who come to Mason hereafter will only have known of the attacks as historical events.

As a patriotic American, lack of memory of those horrific events makes me feel uneasy. It’s not because anyone is intentionally erasing history. On the contrary, Americans do a tremendous job commemorating 9/11. There is a difference however, between commemoration and memory. Anyone can commemorate an event, but only some people can have memory of it.

Memory is much more powerful than commemoration. The emotional link between a person and an event is much closer and more vivid when it is a memory. People can tell you where they were and how they felt when a tragic event took place. Everyone under the age of 20 does not have that link to the Sept. 11 attacks. The destruction of that link is hardly new and it is inevitable since time relentlessly presses forward.

For reasons I can’t really explain, I attempt to remedy my lack of memory by taking a few minutes on Sept. 11 every year to watch news coverage from that tragic morning in 2001. I would not watch such videos any other day of the year, and I get no pleasure from watching them. To be honest, it hurts to see those images. The moment when the second plane hits and the newscasters realize it wasn’t an accident is nightmarishly chilling, but I just feel obligated to watch.

All of us under 20 can never have a memory of 9/11, but the events of that day should be more than something to commemorate; they should be something to remind. To remind us evil is real, forcing innocent people in the Twin Towers to choose between jumping to death or burning to death. To remind us courage is real, emboldening firefighters to run into the towers and start climbing the stairs. To remind us desolation is real, smoldering in the crushed cement and spilled blood. To remind us unity is real, inspiring President Bush’s bullhorn speech to the clean up workers at Ground Zero three days after the attacks.

Most importantly, the Sept. 11 attacks should remind us freedom is neither free nor permanent. The United States was created at great cost and is no more immortal than Prussia, the Ottoman Empire or any other defunct country in history textbooks. We should all be grateful to live in a country designed to secure the blessings of liberty to we the people. The freedom we enjoy is not guaranteed, and there is no way of knowing how or when it may end.

Since we under-20s have no memory of 9/11, we should use Sept. 11 as a day to reflect on those truths and remind us who we are as Americans.

A Love Letter to Women’s Basketball