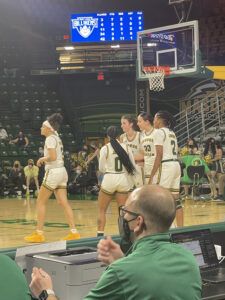 Patriots look ahead for next month’s A-10 Championship

Mason Patriots (9-18) fell short against the Saint Louis Billikens (9-17) where the Patriots hosted their final home game of the season and the Billikens set the tone before heading into the Atlantic 10 Championship.

The Billikens scored more points each period with 12 points in the 1st quarter, 13 for the 2nd, 15 for the 3rd and 18 for the 4th. Saint Louis had the upper hand through the entirety of the game. Seniors, Brook Flowers and Ciaja Harbison lead the Billikens in scoring and tallied 12 points each. As a junior, Flowers started 16 of all 19 games during the regular season during the time of which she placed 1st in rebounding for the franchise. During Harbison’s junior season, she became the 22nd SLU women’s player to reach 1,000 career points.

Head coach, Vanessa Blair-Lewis described Wednesday, Feb. 23rd’s loss as something they initiated themselves. Lewis also suggested that capitalizing is key to playing on both ends of the floor which drew the focus away from scoring.

“The game plan tonight was to make sure we were prepared for the bigs on their team, obviously the size match proved to be a little difficult for us early on,” coach Lewis said. “I think what really just started to get us in trouble was our portion tonight.”

Nonetheless, the Patriots seized a win against Saint Bonaventure in Olean, New York on Saturday, Feb. 26. Sophomore, Taylor Jameson tallied 20 and earned a season-high. With this only being her second year, Jameson has already proven herself countless times in the sport she loves. As a freshman, she started eight of the 22 games she appeared in.

Coach Lewis spoke on how she hoped to answer for this game. She emphasized that taking smarter and better shots was key to being successful moving forward.

“Definitely with better effort”, coach Lewis said. “I just think that we lacked the effort and then once we got down we were not great at capitalizing and knocking down the necessary shots to get us back into the game.”

The A-10 Championships are underway. The Mason women’s basketball team has an opportunity to reclaim their fall against SLU. The competition will begin on March 2nd and will last through March 6th.

View all posts by jstubbs4 →

BRAVING THE TIGHTROPE: HOW NOT TO SPREAD AWARENESS FOR ASD

¡GRAPHIC LIBERATION! AT THE GILLESPIE GALLERY