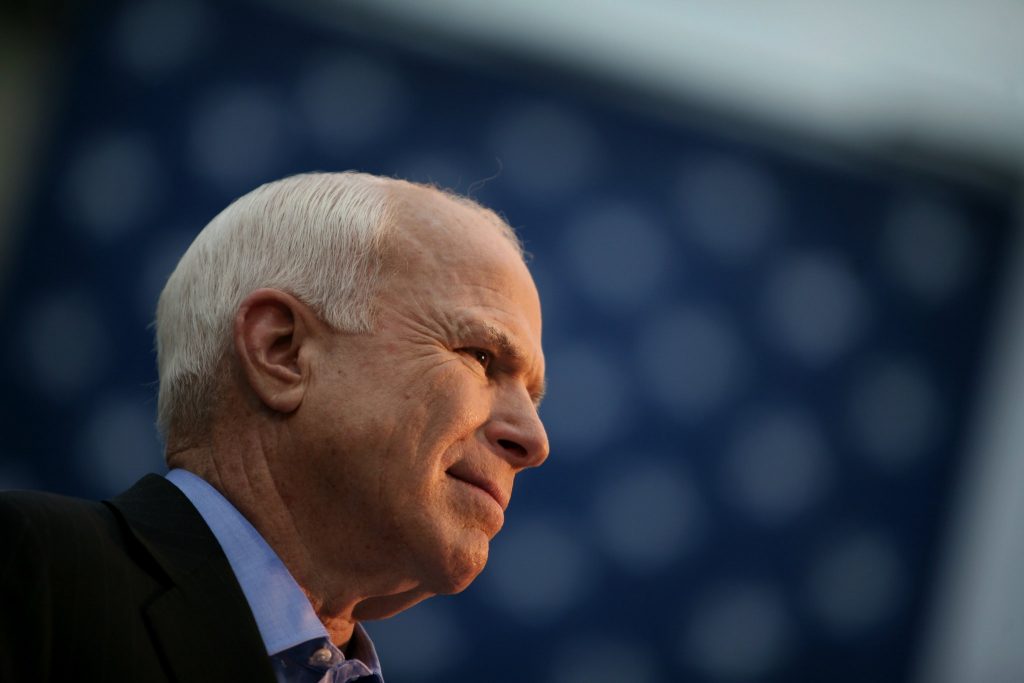 If American political culture had a mother, she would be asking-but-not-really-asking like only mothers can do, “Where are your manners?”

This stuff isn’t hard, and it is something that cultures have been doing for thousands of years.  Going back as far as the last chapter of Deuteronomy, we find that “the Israelites grieved for Moses in the plains of Moab thirty days, until the time of weeping and mourning was over.”  John McCain was certainly no Moses, but this passage illustrates that grieving for dead leaders is one of the fundamental tasks of cultures.

However, it requires a basic sense of manners which is nearly absent from our current political culture. Clearly there are always going to be disagreements with any leader (the Israelites were not known for their constant obedience to Moses, to put it lightly), but that leader’s death is a time to put those differences aside and have some manners.

That means putting the flag at half-staff at the White House without first instigating a controversy.  If John McCain were only a six-term senator, the flag ought to be lowered for his death. But, as almost all of us know, he was also a war hero.  He was tortured for his country and refused an offer to be released early because he knew it would be used as propaganda against his fellow prisoners.  He suffered in ways most of us can’t fathom and sustained permanent damage to his mobility – he couldn’t raise his arms above his head to wave to supporters on the campaign trail.

But President Trump is not concerned with any of that because McCain hurt Trump’s incredibly large yet incredibly fragile ego.  Trump was preoccupied with defending himself and could not suspend that for even a few days to honor McCain.

Then there was the media’s performance of self-righteous fawning over McCain because it allowed them an opportunity to oppose Trump.  We all know how the media actually felt about McCain. He was always pilloried in the press for supporting the war in Iraq, and coverage of his 2008 presidential campaign was overwhelmingly negative.  Certainly media coverage moderates after someone dies, but the over-the-top praise heaped upon McCain was not convincing and served their preoccupation of opposing Trump.

Next, we were treated to a politicized memorial service at Washington National Cathedral.  Meghan McCain had to take a few shots at Trump in her eulogy for her father, and I do not fault her at all for doing so because it is all downstream from President Trump, but we should all prefer funerals devoid of any overtly political content.

Even someone doing the right thing was punished by a mob.  Alexandria Ocasio-Cortez tweeted her condolences about McCain’s death.  Apparently, that is problematic with her followers since they flooded the comments decrying McCain as a war criminal.

There was one faint glimmer of hope for our political culture: George W. Bush passed a piece of candy to Michelle Obama during the service.  This basic, if goofy, gesture between a Republican and a Democrat should be a reminder of what good manners looks like, and it should be a wake-up call to a political culture desperately in need of relearning those good manners.