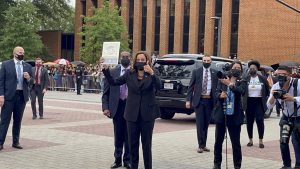 Vice President of University Life Rose Pascarell reported that the White House reached out to Mason to discuss potential voter registration events — though Kamala’s visit was never announced to the public.

Pascarell clarified that Harris’ attendance was not confirmed because of the possible need for her presence in the Senate.

“[It] was really kind of iffy, but [there was] a lot of preparation in advance,” Pascarell explained of the event preparation, adding “a great team … made it come together.”

One of the first agenda items on Harris’ surprise visit was attending Dr. Samuel Frye’s Community, Culture and Change class. She spoke to his students about the importance of voting and engaged in a Q&A session.

Harris stressed the importance of the role college students, and specifically Mason students, play in voting during the visit.

“You all at Mason registered and it turned out in great numbers … you took the streets and said that you wanted certain things and policies about things like childhood poverty and protecting people who lost their jobs from COVID,” Harris said during the classroom visit, according to a video recording published by C-SPAN.

In terms of voting rights, Harris made notice of two voting rights’ acts that are being attempted to be passed by Congress and related it to how it could help students vote.

“The Freedom to Vote Act and the John Lewis Voting Rights Act that we’re pushing to pass in Congress, which would do things like for students with complicated schedules that might not be able to vote on Election Day, so let’s say we have voting two weeks early,” explained Harris.

The last stop of Harris’ visit took place at Wilkens Plaza where hundreds of students, blocked off by two rows of fencing, gathered to see the vice president.

On the other side of the crowd was a table with Student Body President Natalia Kanos, who greeted Harris upon her arrival.

“I have to say I never could have imagined that my college experience would ever involve a Presidential motorcade driving toward me,” Kanos said in a LinkedIn post. Kanos also revealed that the vice president thanked her for being there.

“A major reason I was even there was because women like her decided to take the first step,” Kanos wrote.

Other students were present at the table as well, including graduate student and Campus Organizer for the Virginia Turnout Project Camden Layton.

Layton revealed that Harris asked the students present questions about their involvement on campus and made comments about the importance of college students getting involved in the political process.

According to Layton, Harris acknowledged Mason Men’s Basketball player Josh Oduro, and commented how impressive it was that many Mason athletes are registered to vote.

“It is critically important that everyone registers to vote as a way of expression of your power as an individual in the context of the collective, to make things happen or not happen in your life,” Harris said near the end of her visit when asked about the importance of voter registration.

ARTS EMERGING: A CELEBRATION OF RENEWAL

AUSTRALIA FINALLY PICKED A SIDE, THE RIGHT SIDE