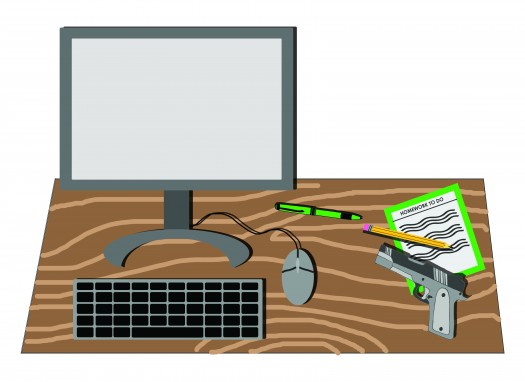 In mid-February, Director of Safety and Emergency Management Dave Farris sent out an email to the Mason community about safety on campus. According to Farris, the email was meant to remind recipients of the university’s protocols, but also raised the issue of safety on campus, especially with respect to firearms.

Farris said the email was not sent in response to any specific event. In fact, he added, the email was menat to come out earlier than February 16, but he and his office decided to push back it’s release due to snow.

“There are no current threats at this time. But as many of you know, we’ve seen an increase in acts of violence in the workplace in recent years, and college and university campuses are not immune to such threats,” Farris said in the email.

Director of Strategic Communications Michael Sandler said one way students can better protect themselves is by familiarizing themselves with the university’s safety and emergency procedures. He explained that the university upholds safety in three ways: using systems like Mason Alert that send students text messages to keep them informed of dangerous situations; providing a list of emergency responses on the Mason website; and giving students the University Police’s phone number to call in case of an emergency.

April 16 will mark the ninth anniversary of the tragedy at Virginia Tech, which still stands as the deadliest mass shooting on an American college campus. Incidents of this sort, combined with changes in gun regulations at state levels, have sparked a heated debate about gun control on college campuses.

In February of last year, Fourth Estate covered the rejection of gun control legislation proposed by Governor Terry McAuliffe and the mixed reactions of students at that time. More recently, a decision by the Texas State Senate has given handgun owners in Texas the ability to carry their weapons on campus and in classrooms at all state universities starting Aug. 1, 2016.

Mason’s rule on weapons, according to University Policy, states, “The possession of any weapon on campus by any member of the faculty, staff or student body, with the exception of law enforcement officials as cited in the policy portion of this procedure is prohibited.”

Sandler explained that this policy means that anyone affiliated with Mason is prohibited from having a weapon on their person, regardless of whether or not they have a concealed carry permit.

In 2011, the Virginia Supreme Court upheld Mason’s gun restriction policy after it was challenged as a violation of Second Amendment. The precedent established in the 2011 case has made it so all universities in Virginia, because of their status as highly populated work and educational environments, have the right to set their own policies regarding firearms on university property.

Though incidents have occurred at other universities in Virginia, such as the Virginia Tech shooting in 2007, sophomore Mandaep Kaur explained that she feels safe at Mason.

“I definitely think this is a safe area, and being involved in the Mason community has made it so I know most of the safety and emergency procedures,” Kaur said.

Sophomore Makeda Fekede said she sees the debate over guns on campus as a tricky issue because she can see both sides of the argument. “I wouldn’t want to take the right to have a gun away from someone, but at the same time I personally wouldn’t feel safe,” Fekede said.

That being said, there are some restrictions on the rules Mason has set for those unaffiliated with the university. For example, when CNN hosted an event on gun violence with President Obama on Jan. 7 at the Johnson Center, the university warned students, faculty and staff that legally-armed protesters might attend. Interim Chief of Police Thomas Longo sent out a campus-wide email the morning of the event that read, “Please be advised that it is lawful to carry firearms in Virginia, and this includes at public outdoor spaces on our campus.”

Luckily there were no armed protesters at the event, according to Sandler, but the fact remains that an individual unaffiliated with Mason is well within their rights to open carry a firearm on campus as long as they are not in any university buildings and they are obeying the law. This has nothing to do with Mason’s policies, but rather, with Virginia State Law, as any public university respects this policy.

Fekede said she sees open discussion as central to finding solutions to the question of safety — specifically gun safety — Mason.

“This [gun safety] is absolutely an issue we need different perspectives on,” Fekede said. “I would say we should definitely be discussing this more.”

Tips for staying safe on campus