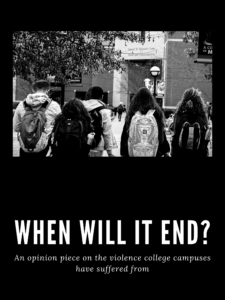 College campuses across the country have become crime scenes, with students fearing for their lives instead of their finals.

This school year, the fall semester has consisted of more than just football games, midterms and frat parties. For college students all over the country, it has also consisted of stalking, rape, murder and living in fear.

As a young person living in the United States, it pains me to say I think I have become accustomed to tragedy. While I have grown up in privileged circumstances, myself and my generation have been privy to countless mass shootings, natural disasters, political turmoil and because of social media, we have had unprecedented exposure to graphic images of death and violence.

In the past week, there have been two very public tragedies at two very large universities across the country.

Last weekend, four students at the University of Idaho were brutally murdered in their home off campus. As of Nov. 21, police said that no one has been charged and they are still looking at everyone to establish a suspect. In a letter from the university’s president, students were encouraged to “remain vigilant” as they continue to live in fear, worried that the unthinkable may happen to them too.

Also last weekend, three student athletes at the University of Virginia were murdered and one more injured, after returning back to campus from a class trip to Washington D.C. late on Sunday night. The entire community remained on lockdown for over twelve hours until the suspect was captured Monday morning.

I’m not proud to admit that when I first heard about these tragedies, my initial reaction was obviously, “Oh my gosh, that’s horrible and so sad. I feel so bad for the loved ones of the victims and their communities as a whole.” I texted the friends I have at the University of Virginia to let them know I was thinking about and praying for them.

After that? I went about the rest of my day and week. I’m also a busy college student with classes, multiple jobs, and extracurricular activities and simply couldn’t let myself or the schedule of my week get derailed because of my sadness.

Now? I’m mad. I’m mad that this is a common occurrence. Not only the tragedies but also my reaction to them. I’m mad at myself. I’m mad that we are still having to continue these types of conversations.

When I was entering my freshman year at Mason, a family friend told my mom “I used to work in Fairfax, it’s a great area and a safe campus. She’ll be just fine.” Throughout my time here I have never felt like I was in danger on Mason’s campus, but now I wonder if maybe I should have.

I can’t talk about feeling safe on campus without also mentioning the article published by the Fourth Estate earlier this week, and the subsequent Letter to the Editor about it.

While I agree with supporting rehabilitation efforts and protecting the privacy of individuals, I also feel strongly about informing the public of potentially dangerous situations. The reality is, this case was already public and though found not guilty by way of insanity, the student still violently murdered someone and people deserve to know who they may be encountering on campus.

Additionally, the Fourth Estate found evidence that university administration was aware of this situation and still neglected to inform students of any potentially dangerous people or situations.

How are students supposed to feel safe on campus when our own university is keeping us in the dark on these issues?

Maybe I am just one of the lucky ones. Yes, I do realize I am calling myself “lucky” simply because a tragic event hasn’t happened at my school. How sad is that? This is an unfortunate reality for students of all ages today.

We should be leaving college with embarrassing tattoos, not lifelong trauma. A degree instead of a death certificate.

I don’t think it’s healthy to let ourselves reel from each and every tragedy. We need to protect our own mental health and peace too.

However, I’m going to let myself feel sad because that is what these victims deserve and because I deserve to feel emotions fully and deeply. If you’re reading this, you do too.