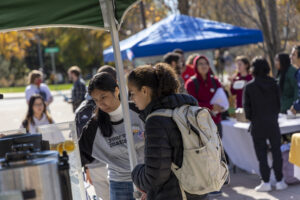 On Nov. 8, a total of 425 students voted at Merten Hall during the midterm elections, in which U.S Representative Gerald Connolly of the Democratic Party was declared the winner for the 11th district of Virginia.

According to Mason, George Mason University is home to 6,200 students who live on campus. During election day on November 8, all students who dorm on-campus were given the opportunity to use their dorm address in their voter registration to vote at Merten Hall from 6 a.m. to 7 p.m. for the 11th District candidates.

Students who did not register to vote by the Oct. 17 deadline still had the ability to vote through same-day voter registration, which was put in place throughout Virginia for the first time this year. Same-day voter registration, as explained by the Virginia Department of Elections, allowed unregistered students to instead show up and fill out a provisional ballot as they cast their vote at Merten Hall.

Of the students who dorm on campus, 425 students voted at Merten Hall, with 175 of those votes being provisional ballots. The on-campus voting rate of 2022 is significantly higher than last year, beating the number of 331 votes in 2021 following the implementation of same-day voter registration.

Two groups tabled outside of Merten Hall as students entered the building throughout the day. GMU Democrats handed out flyers supporting Rep. Gerald Connolly with additional election information. Mason Votes hosted a post-voting survey for students as they left the building and rewarded students with free coffee, voting pins and decorative cookies.

In the 11th District, students had the option to vote for Republican James Myles, or Democrat incumbent Rep. Gerald Connolly for The House of Representatives.

Following the election, it was determined that Rep. Gerald Connolly won the race with 184,593 votes or 66.4%, while James Myles received 93,460 votes or 33.6% as determined by the Associated Press.

The question remains as to whether Mason can continue to see a higher voter turnout on campus in the next few years with increased accessibility and awareness for students.