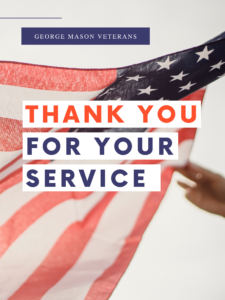 For people who serve in the military, life is not their own anymore. They don’t make their own decisions – following orders and going with the flow is second nature. But after dedicating their time and service to our country, military veterans are finally able to choose their own orders. From representing the red, white and blue to green and gold, becoming a student at Mason is the next assignment for some veterans.

Mason is recognized as a military-friendly school and is in the top 20% of colleges and universities recommended nationwide for veterans and service members. After most veterans complete their service in the military, they choose to return to school, begin new careers and open new doors for themselves. These men and women continue to hold the title of “patriot” by choosing to become a Patriot here at Mason.

From carrying an issued duffel bag most days to a common backpack nowadays, Marine Corps veteran Michelle Hodges transfers to Mason as a junior and is majoring in Psychology. Hodges served in the Marine Corps for five years as a Cryptologic Linguist where she interpreted, translated and consulted in the Chinese language and their affairs. Hodges’s transition to college has been smooth for the most part, but of course, there are challenges that have presented themself to her as a student.

“The main thing that I’ve had to adjust [to] was the difference in attitudes, especially amongst the younger people that I’ve met here,” said Hodges. “I have to constantly remind myself that life is different out here and there are a lot of things that “regular” people just won’t get until they get out and see it for themselves. Most times it’s frustrating, but other times, it’s kind of lonely.”

Although Hodges faces her own obstacles as a student veteran, she points out that veterans experience their own different transitions. Some veterans either have an easier adjustment, while others have a more difficult time transitioning from service to civilian life. Factors such as age, time served and personal experiences from the military changes their entire perception of civilian life – especially in college.

Cecyl Kleismit is a senior majoring in Recreation Management. She is an Intelligence Analyst currently serving in the Army National Guard while attending Mason. Kleismit is adapting without a problem to college life while still pursuing a military career due to only working a few days per month and being able to have time for her personal life.

“I learned realistic time management in the military, and that helps tremendously when it comes to college,” said Kleismit. “I also learned skills on how to retain new information and apply it, which helps when taking multiple classes at once.”

As student veterans apply their skills learned from the military to their college endeavors, some students at Mason are studying and practicing those same skills in order to pursue a military career after college graduation.

Senior Joey Mazel is a Criminology major and is a cadet and leader in Mason’s Army Reserve Officers’ Training Corps (ROTC) on a four-year scholarship. Both his father and two grandfathers are veterans of the military and their services inspire him to commission as a Second Lieutenant in the United States Army after graduation.

“My father has inspired me the most, especially since he decided to join [the United States Army] directly after 9/11,” said Mazel. “I have grown up seeing him put his uniform on and was raised with the ideals and lessons that I think have [been] influenced by the military in some form or another.”

One of the benefits of serving the country is having access to Veterans Affairs (VA) benefits which include education tuition, medical coverage and insurance. Included as a VA benefit is the Government Issue (GI) Bill which helps active duty service members, veterans and their families pay for college tuition – if qualified. Veterans who decide to transition into college after their military service use the GI Bill to help cover college tuition costs.

“Each branch has different jobs and benefits, so I joined the Army National Guard specifically because they had good educational benefits that I could use right away,” said Kleismit.

The Office of Military Services at Mason offers many available resources on campus for veterans and military-affiliated students and is also a place to interact with veterans and service members.

Assistant Registrar-Veteran Certifications and Lead School Certifying Official for Military Services at Mason, Katie Fox-Heim, interacts with student veterans and other military-affiliated students on a daily basis by assisting in processing their student benefits to the VA.

“I enjoy helping veterans and their families go to school and navigate through the complex processing of the VA”, said Heim.

Serving in the military and attending college entail two different respectable lifestyles – pursuing one or the other is not a fit for most people. How much of a “patriot” can one be to choose to do both in a single lifetime?