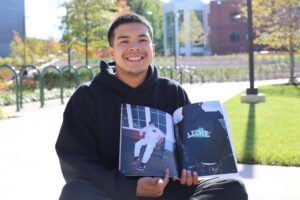 The face behind Leche Magazine.

Spreading out volumes I, II, and III on the table before me. I flipped through the pages of Leche Magazine. I noted the beautiful photography and aesthetic the magazine captured effortlessly. It was unique and was Francisco Ochoa’s vision, right in front of me.

The niche of the magazine was unique to the Virginia area. The hand-drawn logo and layout of the pages, it was all designed by Francisco Ochoa. The magazine gave skater vibes and even had its own streetwear merch.

The 22-year-old founder of Leche Magazine LLC and second-generation senior Francisco Ochoa describes the night when he began to create the vision of what would now be Leche Magazine.

“It was September 2020 and one night I was just thinking about a thought my friend had given me. He told me why not make a magazine. I wasn’t too sure how to start it so that’s when he was like just research it. So one night I was like what’s a good name for a magazine and what’s a good logo? I came up with Leche and at this point, I didn’t think too much of the name” explained Ochoa.

The name Leche was originally just chosen by whim, but later on, it progressed to have a more in-depth meaning to it.

“But now Leche refers to the promised land in biblical terms. The promise land is also referred to as the land of milk and honey in Spanish it’s “leche y miel”. The promise land is where everyone is prosperous and where everyone has gained what they have worked towards and their living happy. That is what the name is for now. But to me, it’s always just been that friendship connection” said Ochoa.

As the ideas began to form and finally come together the first volume of Leche Magazine was released on April 7, 2021.

“I had been working on it day in and day out and at first, I didn’t think much of it. I just had the thought process of okay I am going to make a magazine we will see how it goes I doubt that it would go (anywhere) past my first volume” said Ochoa.

After producing his first volume, Ochoa realized how much it impacted him and others. Leche Magazine covered the stories and business no one else did. Leche provided a platform.

“Currently from Volume I to III it’s been about exposing local brands and businesses. People that are pushing their talents, local people. To give those people a platform to show off what they have been working on. Whether that’s photography, journalism, or design” said Ochoa.

The photographer behind volumes I, II, and III was Mason student, Rafa Gold. The two bonded over streetwear photography and a new pair of Newbalances. Rafa is currently a designer contributor for Leche Magazine.

Rafa made all of Ochoas’ photography visions for Leche Magazine become possible and achievable. The trust formed pushed the envelope for creative and innovative ideas like never before.

“Rafa Gold made all my dreams and visions come true. Any type of shot idea I have ever had.  He makes all these ideas come true. If I had had an idea where I was like I want you hanging off this ledge he would be like okay let’s go get that ledge shot” said Ocha with excitement.

The process of capturing images for Leche Magazine was unique and dynamic to the aesthetic. One thing that was highly important to Ochoa was the models being comfortable.

“The photography process can be simple it can be complex. Volume I was shot in DC, and volume II was shot in various other locations like Rafa’s apartment, warehouse, and nature. I am a big sucker for nature. All these shoots are very fun. We try to make sure people feel comfortable and we will even play the music that they like ” said Ochoa.

Ochoa continued to explain that he even will encourage people by his saying: “Alright shake it off, feel good, look good.”

“I always like to capture people how they are. I don’t like to stage who they are or force a personality that isn’t theirs. I always tell them to do what they usually do. Dress how you usually dress and express yourself the way you like to express yourself” said Ochoa.

“ I definitely want to make it a seasonal magazine once I graduate I  want to dedicate more time to this magazine simply because I have this big goal of being my own boss one day. I am very open-minded to see where the world takes me, but it is my goal to have it as a seasonal thing,” said Ochoa.

Leche Magazine currently receives no funding or investors all of it comes from the hardworking pockets of the founder himself.

“I work part-time as an Amazon driver and any money that comes in from that I split it and invest half into my brand and save the other half. I have gotten any investors. I have gotten people who are interested in investing but I think at my age I am doubting myself at a point,” said Ochoa.

As the founder and senior at Mason, Ochoa described the challenges in time management, “ I feel like honestly, I do have to get better with my time management but I have just been going day by day.  I work Wednesdays and Saturdays then I go to school Tuesdays and Thursdays. But I try to dedicate Mondays, Tuesdays after school, Thursdays after school, Wednesdays after work and even Fridays to meetings with my team. Any free time I get I always try to see what I can fit in”.

Leche Magazine is a full-time digital production that has all been processed by Ochoa’s PC he built himself with the addition of colored LED lights.

“Digital production is all from Adobe Indesign and Photoshop, as well as Illustrator. I send them to a printer from Utah. I was literally surfing the web one day trying to find these printers when I was releasing my first volume.  I found some printers in Utah [that are] very affordable, it was within my budget and so I build a connection with them, a trustworthy relationship. And then when it comes to selling them I usually do that at pop-ups” said Ochoa.

Ochoa plans to add more journalistic elements to Leche Magazine by branching out to different writing styles and even opinion pieces.

“When it comes to Leche Magazine people also want to express their opinions about certain topics but right now it’s just been covering a lot of stories that have not been covered. A lot of profile pieces on these brands or local businesses whatever it is. So right now a lot of factual information reading these businesses but I do want to get into opinion pieces simply because opinion pieces can lead to somebody else opinion being changed for the better”  said Ochoa.

Ochoa explains how growing up and being surrounded by photography has played a role in him finding his passions through the creation of Leche Magazine.

“My whole life I have grown up around photography and it always has been photography left or right. I love streetwear photography and these crazy angles that you would not get in traditional wedding photography, or graduation pictures. I really like to do some crazy photography just because it’s fun. So I think the inspiration comes from myself and wanting to dip my toe into something that is usually isn’t done in the Virginia area” said Ochoa.

Ochoa’s creative strive in making Leche Magazine is just the beginning of a potential lifelong career. His story speaks about the ability to chase after one’s dreams and never give up.