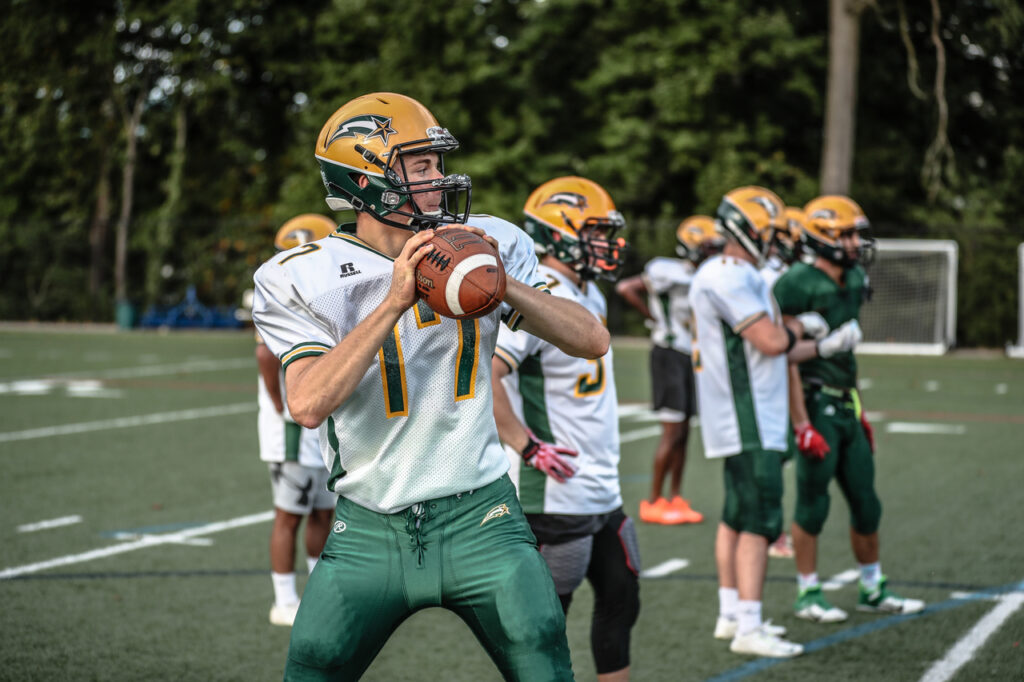 The George Mason Patriots club football team kicks off their first official game against Maryland Prep. this Saturday at 2:00 p.m. located at the RAC Field.

The Patriots are set to return their full roster after placing second from an outstanding season during the fall of 2021. Despite the challenges of finding new players, linebacker, Nathan Williams has much to look forward to this season after making it so far in the season last year.

“It’s a little rough at times just because we have to get all these new guys adjusted and get them back into the swing of things”, Williams said. “It’s been about getting everybody back in shape–that kind of mentality where we were last year where we’re trying to win the national championship”.

RISING THROUGH THE RANKS

“I was the assistant head coach last year”, coach Warden said. “Before that, I coached at Owen high school for 18 years”.

Despite the struggle for recruitment, Coach Warden still has his eyes on the prize knowing that with his new position in the franchise, he will coach the way he had always wanted to. He hopes to lead his players to an even better season than the previous one.

“It’s a little hectic in the beginning but we’re settling in, we’re getting things taken care of…I’ve always wanted to be head coach so I can show what I want to do and how I want to run our team to see if we can get these guys going right”.

The Patriots had a scrimmage game against Williamson Tech Saturday, September 17th. Coach Warden had mixed feelings not just about that game but for the season as a whole.

“Most likely the games I always feel nervous and excited all the way out there”, coach Warden said.

Coach Warden emphasized how this past spring, the team hosted preseason training. In the summer, however, the players did not have access to all the equipment which resulted in strict strength and conditioning as their alternative option.

“We have our strength and condition coach, he gave them a workout plan”, coach Warden said. “So they exercise working on that at the RAC and other places”.

A few players have unfortunately suffered injuries from practices and scrimmage against Williamson Tech. Sophomore, Gabe Gibson explained the current situation with the players.

“One of our quarterbacks is hurt from a tackle on the play”, Gabe Gibson said. “Our linemen hurt his knee and linebacker hurt his foot but he’s recovering quick”.

This is what has forced delays throughout the start of the season whereas originally the season was to kick off last Saturday.

“I think that with the type of dudes we got still trying out for the team we will make a good run”, Gibson said. “We just have to adjust and adapt”.

There is much to look forward to this fall as the season kicks off this Saturday against Maryland Prep.

WHY THE FIRST AMENDMENT IS IMPORTANT TO JOURNALISTS