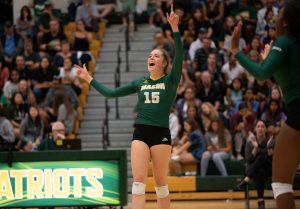 In sports, injuries are commonplace. While some athletes come away with only some cuts and bruises, this was not the case for women’s volleyball sophomore Erin Derick.

Derick’s journey began in the summer of 2008. Derick was watching beach volleyball in the Olympics when it all sort of clicked. “Mom, I want to do that,” Derick said.

By the time sixth grade rolled around, Derick knew this was the sport she wanted to pursue. “I had a coach and he was like ‘Erin you’re going to be a setter,’ and he trained me to set. And that’s what I’ve been doing since.”

However, things shifted in 2017 after what was considered to be a normal play for Derick. “I had a miraculous save in a game. Everything was fine and dandy … I went home, had ice cream, took a nap, went to sleep,” she said.

She continued, “I woke up the next day and my legs were really tight. And for the next week I was in the training room in my high school just getting treatment for my hamstrings and quads. [The trainers] finally were like, ‘let’s get you an MRI just to make sure you don’t have anything wrong with your legs.’”

This is where it took a turn for the worst. MRI results showed that the pain was not coming from her legs, but rather, her pelvis. The doctors told Derick that she had shredded her pubic synthesis, the piece of cartilage that holds in the front of the pelvis that prevents the two pelvic bones from separating.

This meant that all the physical therapy that Derick had been through to get back on the court was for nothing. “It was going to prevent me from possibly walking again,” she said.

According to Derick, she was referred to a pelvic specialist who, upon seeing her results, said “get this girl in here now, something’s very wrong.”

Just 11 days after she felt as if something was wrong, Derick found herself in the hospital. Over the course of the next seven days, she had undergone three different surgeries, making it difficult for her to walk.

“I couldn’t walk without crutches until after Christmas [of 2017], and then I was in physical therapy until the beginning of April, and then I didn’t play volleyball until end of April,” she said.

“It was the worst because all I wanted to do was get all my stress out playing volleyball like how I used to,” Derick said. “And one thing I’m very proud of is when I was in the hospital when I came out of the hospital going through PT. I always had the positive mindset that all my doctor said, my mom saw it and my mom and I still cry about it. And she’s like, ‘I’m so proud of you for keeping that positive mindset,’” Derrick said. 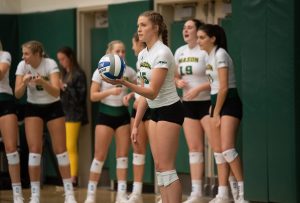 She continued, “I have to say it’s hard when you can’t play the sport you love. It’s one of the hardest things, because all you want to do is do that to help you feel better. But when you can’t, you have to find other things, so I had to start reading and start writing, and just working so hard in school to just get myself, on every level, back to where I was before.”

“I was worried about it, but she had the work ethic of someone who was working as hard as she could to be as physically and mentally prepared as she could once she got here,” Ilkson said.

She continued, “I think that it honestly was once she arrived in the summer. It gave her time to actually acclimate to what we were going to do here that really helped alleviate a lot of stress about her injury and also get her mentally prepared to battle through if it was going to perk up again.”

In 2018, Derick played a limited role on the Mason squad, only tallying 20 assists on the season as a setter. However, Derick’s life took another turn in the 2019 season.

She found herself in the position she wanted to be in: the starting setter. In her first five games, she tallied 148 assists as the main setter. With two matches left in the 2019 season, she has recorded 598 assists at the setter position.

There have only been two sophomores to record more than 590 assists in one season in the last five seasons: Derick (currently 598 in 2019) and her current teammate Emily Konchan (895 in 2018).

Ilkson credits this dramatic jump to her training in the spring and the summer of 2019. “She worked so hard in the spring,” she said. “I think at times it was very painstaking for her and it was very frustrating for her. But if you can imagine that when she came in, she couldn’t jump set and locate where she was going to set the ball and I just said, ‘That’s okay, we’re going to go through all fall like that and then in the spring we’ll get to work.’”

She continued, “I think there was a lot of moments of just pure, ‘This is not fun at all.’ [But] I mean I think I was just really happy for her … she has really worked at this and she was up against someone who had started for every almost every play of her career … she was that kid that worked so exceptionally hard to get here.

She is probably my greatest accomplishment as a coach in the fact of where she started, and what we knew her athletic ability was to where she is right now.”

Derick overcame the possibility of never walking again and trained nonstop to finally do what she longed to do — play volleyball.

Fall Sports Round Up