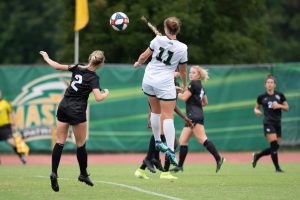 Similar to the 2018 season, the team again found more success in conference play than nonconference play, going 3-5-1 in the regular season.

Mason defeated American and George Washinton in regulation. The team also had two double-overtime wins against Dayton and Davidson.

Three of these four wins occurred at home, with the win against the Colonials taking place a few miles away in Foggy Bottom.

On Nov. 9, the seventh-seeded Patriots lost to second-seeded VCU, 4-3 in a penalty kick shootout, a week after losing to the Rams 1-0 on Senior Night.

Sophomore Brison Moorhead spent most of the season in goal for the Patriots. He allowed 1.71 goals per game and had a 0.732 percent save percentage

Senior Ryan Mingachos led the team in goals this season with four. He also added two assists this season.

Six other players contributed at least one goal this season.

Women’s soccer’s season came to a disappointing finish on Oct. 27. The team went 2-4-1 in nonconference play.

After starting the season 0-3-1 the team got their first win against Binghamton, 2-0, at home on Sept. 8. The team would get their second win of the year, 1-0, one week later against Towson on Sept. 15.

However, that game changed the course of their season. Thirty-seven minutes into the game, reigning A-10 Rookie and Player of the Year Emma van der Vorst went down with an injury. She did not play another minute this season.

After losing the next five games, the Patriots defeated Davidson 1-0 on Oct. 13.

Juniors Kayla Hamric and Jisca Adigo led the team with nine points each, both scoring three goals and accumulating three assists throughout the season.

Women’s volleyball’s 2019 season has been disappointing. One year after making their first A-10 tournament, the team has gone 0-12 in conference play. The Patriots’ overall record is 4-20. 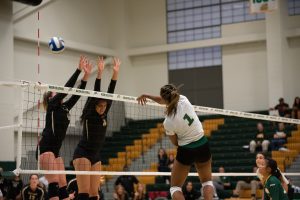 All four of Mason’s wins came in the month of September. The team beat UMBC, Saint Francis (Pa.), Maryland and William & Mary.

Despite the team’s record, many of the players have had successful seasons. Sophomores ShaLi Niu and Siron Hardy, as well as senior Bailey Williams, all average more than 2.9 points per set.

The trio also all average more than 2.6 kills per set.

Sophomore Erin Derick leads the team in assists with 7.7 per game and junior Emily Konchan is second on the team with 5.38 assists per game.

Both the men’s and women’s cross country teams had successful regular seasons.

At the A-10 Championship, the men’s team placed fourth, their highest team finish since 2016. Ikenberry and Jutras both finished in the top 15 to earn All-Conference honors.

Qualifying runners will continue the season at the NCAA Southeast Regional Championship on Nov. 15 and IC4A/ECAC Championships on Nov. 23.