Poet and professor speaks about the poetry performance of Cecilia Vicuna 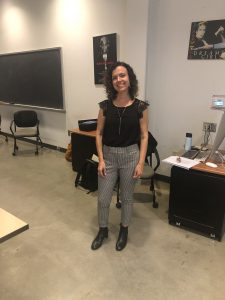 On Nov. 6 in the Art and Design Building, poet and translator Rosa Alcala hosted a talk discussing the oral performances of multi-disciplinary artist Cecilia Vicuna.

Alcala translated and edited a collection of Vicuna’s ambitious readings and performances in “Spit Temple,” a book of transcriptions that tries to encapsulate and display the multi-faceted work of the Chilean artist.

As a partnership event between Mason’s creative writing program and the School of Visual Arts, Alcala came to Mason to discuss translating Vicuna’s experimental poetic readings.

“It’s very interesting to translate from an oral tradition as opposed to a written tradition,” said Matthew Davis, one of the event’s organizers and a professor in the English department. “That’s really what [Alcala’s] doing. She’s translating Cecilia’s poetry performances.”

Vicuna is a filmmaker, poet, painter, improviser and activist. She was born in Santiago, Chile in 1948, and left for the Slade School of Fine Arts in London in 1972. Now, the artist splits her time between New York City and Chile.

According to Alcala, the 1973 military coup that took place in Chile while Vicuna was studying in London greatly impacted the trajectory of her body of work.

“The military coup would change the course of her work and life forever,” Alcala said. “Since the coup, she has lived primarily outside of Chile, living for a time in Bogota, Colombia, and since 1980, living in New York.”

Vicuna’s poetry, like most of her other work, is not traditional. Readings often include singing, switching languages and varying degrees of improvisation.

“What I noticed in a lot of these performances that were videotaped — some of the archives that I worked with were just audio tapes — [is] that the camera person was focused on the microphone, right,” Alcala said. “That’s where the reading was going to take place.”

In a video shown by Alcala, Vicuna began her reading with a faint, chant-like song prior to making it to the podium. For viewers, the song is audible, but the artist is nowhere to be found.

Alcala continued, “What was being filmed was the podium. And that sometimes the camera person would start swerving looking for where was the music coming from.”

“So there was a lot of confusion and I started thinking about how the video person, the person who was filming it — the video — was also reflecting on our expectations of how we think a poetry reading is going to take place,” she said.

Alcala’s work was an immense undertaking. Translating audio and video performances is a unique challenge that is different than working with written material.

“I think I’ve been drawn to writers that think about visual art,” Alcala said. “But the reason that I’ve dedicated so many years to her work is because it took me so many years to figure out how all these elements come together.”