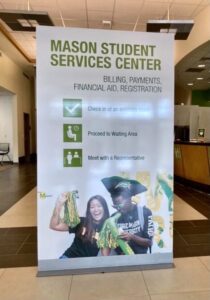 Financial aid is a pain. Every semester, students worry if they will receive enough aid to pay for their tuition.

While paying for college is already stressful, it is about to get even worse for student athletes as Mason was found to have committed NCAA scholarship violations. The student athletes received an exceeding amount of awards from the university, so much so that it exceeded the cost of attendance.

The university is now facing penalties, including a one-year probation and a $5,000 fine. In addition, 10 % of scholarships will be reduced for men’s volleyball for the 2021-22 and 2022-23 school year. Selected staff from the Financial Aid department will also attend a Regionals Rules Seminar.

These violations also affect prospective students because the university must notify student athletes in the affected sports of these penalties prior to their visit.

On top of all these penalties, the president is going to provide a letter to the Committee of Infractions that our university will follow these policies and conform to all the NCAA requirements.

Now that the university is reducing the scholarships and grants for the men’s volleyball team, what does this mean for other student athletes or nonathletes? Are there more inconsistencies in financial aid awards that have yet to be uncovered?

Across these four sports, a total of 17 students competed while ineligible and 16 students were reinstated, but two had “exhausted eligibility.”

It was not the student athletes’ fault for these miscalculations. The only consequence students may face is having to complete a community service requirement to be eligible for reinstatement, according to the report. But for the past four years, these student athletes have been competing while ineligible and the consequences are now in effect.

The case synopsis stated that, “the deputy athletics director discovered that the institution over-awarded financial aid to men’s and women’s basketball student-athletes in the previous fall semester.”

What is concerning about this issue is that the newly hired deputy athletic director caught these miscalculations and not a financial aid staff member.

The synopsis also stated that “the athletics department used the director of financial aid’s e-signature to sign the grant-in-aid agreements without requesting permission or approval.”

Our institution’s reputation is now in question as it shows a failure to monitor financial aid awards. These penalties will make it more difficult for other student athletes and other students in general to obtain any financial assistance.

Now that there are some losses in the scholarships the institution can provide, this will badly affect those student athletes who do not have enough to pay for their tuition. This decision shows the irresponsibleness of Mason’s Office of Financial Aid, as this was happening for four years and no one from the office caught this miscalculation.

In the future, steps should be implemented to monitor for these sorts of miscalculations to prevent situations and violations like this from happening again.