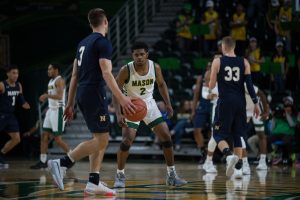 It’s not every day that you grow up with parents who both played college basketball. However, Mason men’s basketball’s Xavier Johnson was lucky enough to have that experience.

Johnson’s mother, Mary Johnson, played at the University of Maryland Eastern Shore during the ’80s.

On the other hand, Johnson’s father, Kelvin Johnson, played college basketball at the University of Richmond from 1981-1985 before being drafted by the Indiana Pacers in the fifth round. His father scored 1,400 points during his college career and was inducted into Richmond’s Hall of Fame during the 2008-2009 season.

It was this environment that allowed Johnson to excel on the court.

“They both coached me,” Johnson said. “My mom coached me when I as younger, playing in the youth league and once it got a little more serious in AAU, my dad took over and coached me from there.”

Johnson knew from a young age that he wanted to play collegiate basketball. “I always wanted to do it,” he said. “I never thought twice about it; I was always in the gym with my dad and I grew up with that mentality and put so much time into it.”

“It was a little different,” Johnson said. “Just having my dad there all the time having him take me to the gym, it’s just a different responsibility … We had access to the gym a lot at Episcopal so I would work out in the morning before classes with my brother at 5:00 a.m., go to class, then do lifting in the afternoons, so it was pretty easy to enjoy.”

During his time at Episcopal, Johnson scored over 1,400 points, with 495 of those points coming in his senior year. Johnson made the VISAA Tournament Finals in 2019 and won the championship in 2016. He was a two-time First Team All-State and First Team All-IAC selection. Johnson also earned D.C. All-Metro honorable mention accolades and played AAU basketball for the esteemed CP25.

Head coach Paulsen said that watching Johnson play for the first time was not your average scouting session.

“He was on our radar, my assistant coaches were like, ‘You got to go see him, you got to go see this kid Xavier.’ It was interesting in the first game I saw him play. He played passively, and I was like, ‘Eh, I don’t know how good this kid is,’ and then all of a sudden he flipped the switch and he was just in attack mode, and I was like, ‘Okay, that’s what these guys wanted me to see.’ But it’s a fine line; you can be in attack mode all the time and still be unselfish and that’s something you’ll continue to learn,” he said.

Johnson chose Mason in 2019 after receiving offers from schools like American and Colombia, and receiving interest from many others.

When looking at his offers, Johnson said that Mason stood out for three reasons. “The family aspect, on and off the court, the academic side, and then just having that support of my family around here in the same little area — so that was a big part.” 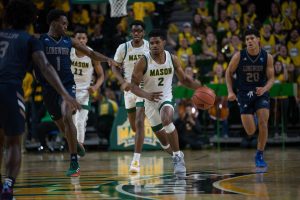 The transition from Episcopal to Mason was, in Johnson’s opinion, “very easy.”

“I didn’t even have to stress,” Johnson said. “It’s a bit of a transition — just take care of yourself, you got to do laundry, you got to go shop for yourself, get your own food. So I get all that stuff, it’s easy, just lots of time management.”

However, Johnson’s transition from high school basketball to college basketball was far different. “I’ll say the biggest transition is probably speed and strength, because I’m pretty fast — we’re just playing at a fast pace all the time. Just the biggest thing, and you just got to bring it every day, and it’s going to be a grind but you just have to keep on working,” he said.

With the chance to finally play college basketball, Johnson had one goal. “I just want to follow [my father] in his footsteps, how far he took the game because he’s in the hall of fame down in Richmond, and a lot of people talk about how good he was, so I just always trying to follow his footsteps and he worked hard to do that,” Johnson said.

Johnson finally made his college debut on Nov. 5 against Navy. “It was definitely very exciting. It was a lot of fun, it is a lot of energy from the crowd so it definitely made it a lot easier to play,” Johnson said.

Through three games, Paulsen already believes he has something special. “I think he’s got a chance to be an elite defender and a quintessential point guard. He’s got great leadership skills, he’s got an innate level of toughness. That was just shown watching him, whether it the Episcopal high school team or watching him with his AAU team, he certainly is living up to that.”

Paulsen continued, “I think the sky’s the limit. He certainly elevates his game for a game, which is a good thing, and not a good thing. If he can learn to really attack every day in practice. He could eliminate some of the mistakes or things like that. That’s a typical challenge for every freshman, it’s a lot, but I think he can be special.”

Through his first four games, Johnson has scored 43 points, averaging 10.8 points per game and going 15-27 from the floor.

With a long season ahead of him, Johnson has set his sights already for his career at Mason, “I’ll just want to be one of the best guys to come through here. Try to get the team back to the NCAA Tournament and put the team back on the map. We’re off to a good start right now, and need to stay locked in and keep doing what we know every day.”

The Patriots play Loyola (Md.) on Tuesday, Nov. 19 in the first round of the Cayman Island Classic at EagleBank Arena.