A celebration of community and spirituality on Mason’s campus 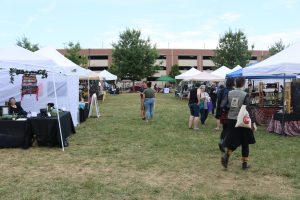 The Northern Virginia (NOVA) Pagan Pride Festival was held on Merten Hall’s lawn Saturday, Sept. 28, allowing one of the area’s lesser-known cultures to gather on campus. The Mason community — Pagan or otherwise — could explore Pagan culture and experience the companionship of the Pagan community of NOVA.

This was only one branch of a nationwide non-profit organization known as the Pagan Pride Project, which seeks to “promote the Pagan identity through education, activism, charity and community.” Though Paganism is a diverse and complex religion, there are a few key concepts that define it: a belief in earth-based spirituality, a focus on the Divine Feminine and an emphasis on shamanism.

Pagan Pride has been holding annual festivals to educate the public and provide a space for the community to connect since 2007. This is the fourth year that the NOVA festival has been held at Mason. The festival drew vendors selling handmade jewelry, tarot card readings and spirituality workshops.

The date of the event held significance itself, according to Mason graduate Michelle Janicki, an event coordinator of the festival. Pagan Pride festivals are nearly always held on the final weekend of September in order to align with the Pagan holiday of Mabon, a celebration of the autumnal equinox.

“It’s the second harvest in the cycle of the year,” Janicki explained. “It’s a time where we share our abundance.”

In keeping with that principle, the festivals almost always include a donation to a charitable organization. This year, attendees were encouraged to bring canned goods, non-perishable foods and other donations to benefit Mason’s community through the Patriot Pantry.

Megan Sills, a senior at Mason, said it was important to her to have an event like this on campus. “I don’t see a lot of Pagan stuff going on,” she said. “I was very excited to learn they were having this here.”

For Cat Yimet, a representative of The Fellowship Beyond the Star, having access to a Pagan group when she attended college at Northern Illinois University was an important part of her experience.

“I was lucky in that I had a college Pagan group,” she said. “A lot of college students are starting to explore [religions] and they might be interested in Paganism or something similar, and it’s good for them to have the opportunity to ask questions.”

The event was free of charge. It also featured dance performances, a food truck and a raffle of spiritual items from some of the vendors present so that attendees could fill their day with celebrations of their vibrant community.