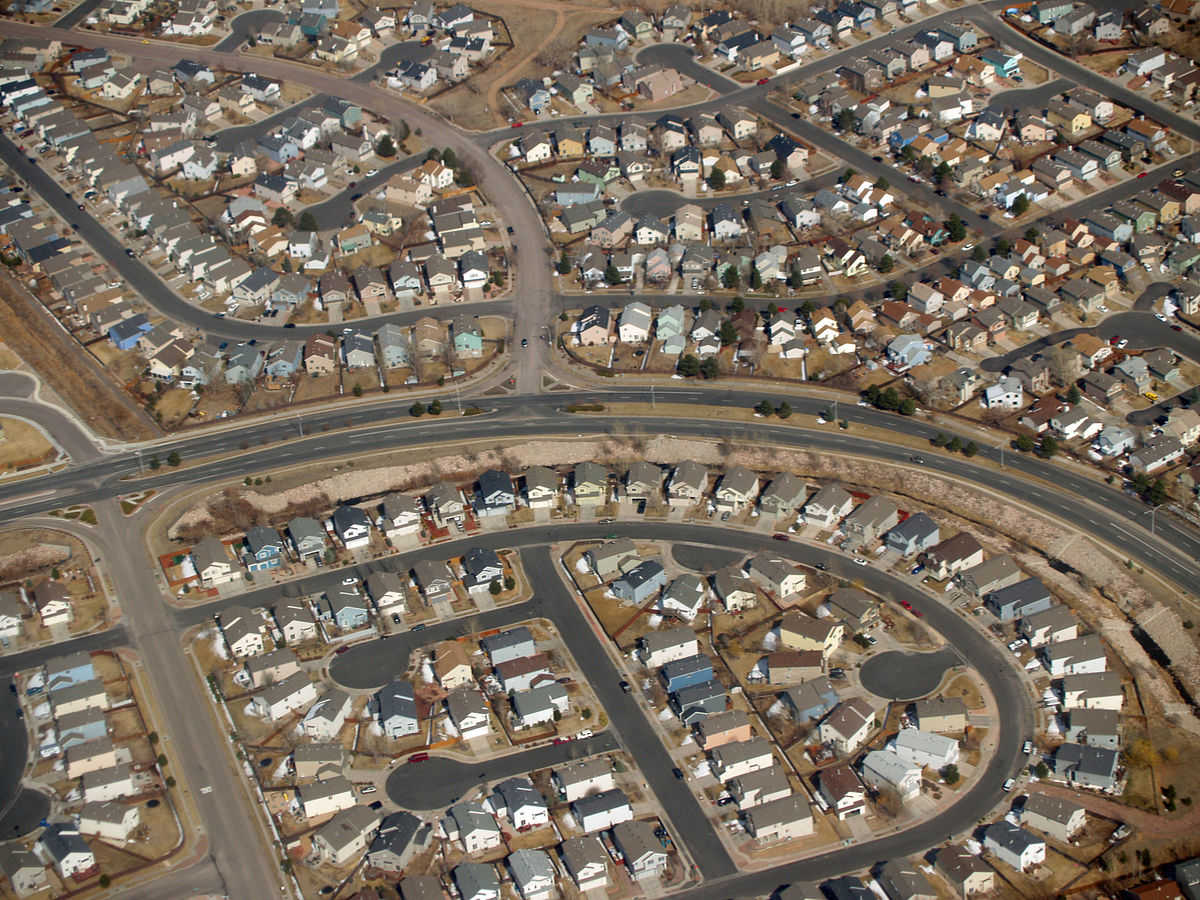 Going to Mason is a time of transition for new students in many ways, and for some it isn’t just a new home — it’s a whole new area as well. Northern Virginia is dominated by the typical suburban sprawl, land parceled into distinct subdivisions and roads wound into alternating grids and cul-de-saks. Most of us who grew up in the suburbs think very little of it, but if we dive deep into why suburbia exists and the ideological effects of its design, we may begin to think differently about what we once considered “normal.”

The first 18 years of my life were spent in a small suburban town — I shouldn’t call it a town, really; towns like Leesburg or Culpeper have a historical reason to exist, and municipal governments to plan them.

By contrast, my “town” was a segmentation of houses with no center, the roads detonated what was and was not residential areas, and divided the land accordingly. You couldn’t comfortably walk much of anywhere.

There was a strip mall complex somewhere in there, with a large grocery store and smaller shops around it (all of which possessed the architectural zeal afforded by poured concrete), but these surrounded what is the great dependence of the whole scheme: the parking lot.

That parking lot reveals the reason that my census-designated place was able to form in the manner it did: cars.

The reason that cities and towns came to be was the fact that the quality of life improves when many people in one area have access to things like public transport, work opportunities and commerce close to their homes. In pre-automobile times these things could mostly be had only by living in a town or city where a citizen could walk to where they needed to be.

The introduction of the automobile, however, made this cooperation unnecessary; no longer do we need to cooperate with our community members to sustain ourselves — we are now endowed with the freedom to travel to wherever we please to acquire the sustenance and commerce cities and towns had previously afforded us.

And so, as people were unshackled from the communities they relied on, you can only imagine what followed was a glorious liberation, right? Unfortunately, not. Instead, those who left the cities and towns were sold a seemingly perfect solution: the opportunity to own their own home and property, thus not relying on anyone — the American dream, perhaps.

But these homes were bland, cheap reproductions of each other. Rather than existing in harmony with their surroundings, suburban residents exemplify an insular experience. One where they wake up in their house, get into their car, drive to their job, work from nine to five, come home and do it again the next day. This cycle generally negates what anyone might consider the formation of community. There is no reliance on those around them, as the location of their home has become irrelevant. It exists within a vacuum, which they exit when they go to work every morning, and reenter when they arrive back at night.

Even though the suburbanite is surrounded by people, they are pitifully alone. There exists the essential and intrinsic want within all humans for some form of sociability, that which contributes to a happy life. But in the suburbs this interaction is not facilitated — it is all but stamped out.

The houses were built cheaply, and randomized from a variation of models and elements so that, while no one could say that any two adjacent units were exactly alike, every house on the block had the same interior amenities, vaulted ceilings in the master bedroom and bathroom, two full baths and one half bath, and a stylish chandelier in the foyer. Never mind the lopsided roofs and unappealing side views that came as a result of these criterion.

Who wouldn’t be happy with these amenities? There’s no possible way that these things could be at their core a hollow deception, appealing to the vanities of the homebuyers, throwing away all uniqueness and humanity for sterility off of which they could profit. But as I and any longtime suburbanite willing to look deep enough realized, they were.

To understand a suburban developer one must ask what their main goal is; a developer is in the same business as every other business: the business of making money. Their job is to maximize profit. Your house is built cheaply, just like all the others in your neighborhood, and why would they do it any different? As soon as your house falls apart that means you have to pay someone to fix it, and if not them, at least someone else gets to make a buck, just like the developer, just like the bank, just like your boss. So you’re sold a dream of an independent life, but you buy yourself into isolation.

The land is so clearly partitioned between residential and commercial areas that walking much of anywhere is inconvenient, and no unique locations of any cultural significance exist. It’s just strip malls, it’s just nothing, it’s just the same stuff that varies in price based on the community’s level of income. Where’s the public transport? Where’s the communal spaces? Where’s the culture? It doesn’t exist, because this isn’t a community, there is no fellowship, there is no commonality of struggle — even though every person is going through what is essentially the same experience, contained within the microcosm of their own home. here is no solidarity.

So, when students new to the area look around a bit and find the suburban sprawl, they should know how to understand the apparently illogical design choices — but fear not, students, those communal spaces and collaborative projects that the suburbs lack can be found right here at Mason. Although Northern Virginia chops itself up for the individual, during your time here you’re a part of something bigger, and that can be a substantial comfort to the few of us who spend far too much time thinking about land development choices.