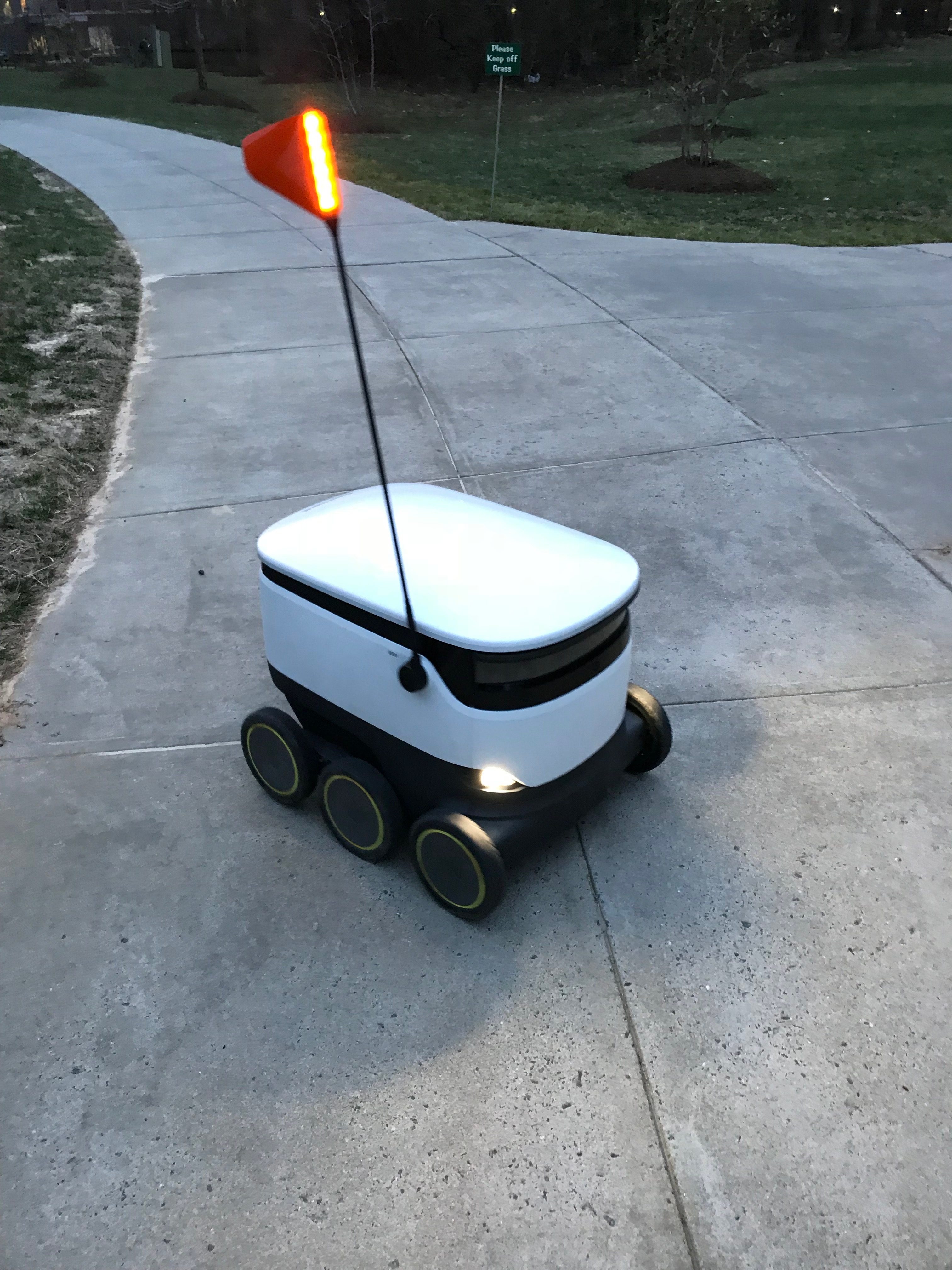 As the sun rises in the morning, the site of tens of thousands of tired college students shuffling across the concrete is in clear view. When a Starship robot rolls across the sidewalk, a group of freshmen stumble out of the way to clear its path. An aerial view of Mason’s campus shows a multitude of Starship robots freely rolling throughout various walkways while students are forced to make short, calculated steps on hilly, cracked pavement. The low-energy students move in a zombie-like fashion to both allow the wheeled robots to dominate the main pathways and provide food to the people on campus throughout the day.

When a student was asked his response to the robots first being introduced to Mason’s campus on Jan. 22, he replied, “Yeah, they’re pretty cool. When I get bored, I usually jump in front of a robot on the move to entertain myself. My friends and I have actually made it a game similar to hopscotch.” This expressed excitement has been displayed throughout the entirety of people on Mason’s campus.

Since the first day the robots were activated, Mason has been nationally recognized for its innovative technology. Many potential students came from afar with their families to view the robots wheeling their way across campus. The visiting families tend to watch on in awe as the robots get stuck in the compact corners created by Mason’s most recent campus reconstruction project.

“It’s just so amazing how they stop when they sense something in front of them,”  remarked a visiting parent from out of town. “I once saw a robot stand still behind three stuck robots for 25 minutes until the path in front of it was clear. What safe driving.”

The touring families always leave with the knowledge that Mason is a university rapidly propelling toward the future with their advanced technology. Visitors, students, faculty, and staff alike are all extremely excited to see what other new technology will be introduced to Mason’s campus.

Beginning the 2019-2020 school year, Mason will be implementing even more notable changes in regards to their educational system. An administrative worker in the department of engineering revealed Mason’s future plans for automated faculty and staff provided by Starship Technologies.

“Robots are much more efficient workers,” she described. “They have evolved through artificial intelligence, and can teach students much more than a human. Also, Mason can cut costs on the hiring process for department faculty and staff.”

When the woman was asked how those changes would affect her career development as well as her overall financial stability, she became slightly emotional and replied that she did not want to comment.

Other employees had more to say on the subject of the  effect the 2019 automation project would have on their career. One professor of science simply quoted, “I’m looking for a new job.”

At the start of 2019, Starship robots took over the job of food delivery on Mason’s campus, creating a challenge for many apps such as UberEats that employ human delivery drivers. The automation project for August 2019 will allow Starship robots to take over the positions of faculty and staff. Eventually, the drained and dead-eyed students that roam the campus, avoiding the walkways of the multiple robot employees, will have to calculate their every move with timid, mechanical steps. The future of Mason’s campus has been made clear by the many steps taken toward a brighter, better university. Soon, everyone will be robots.