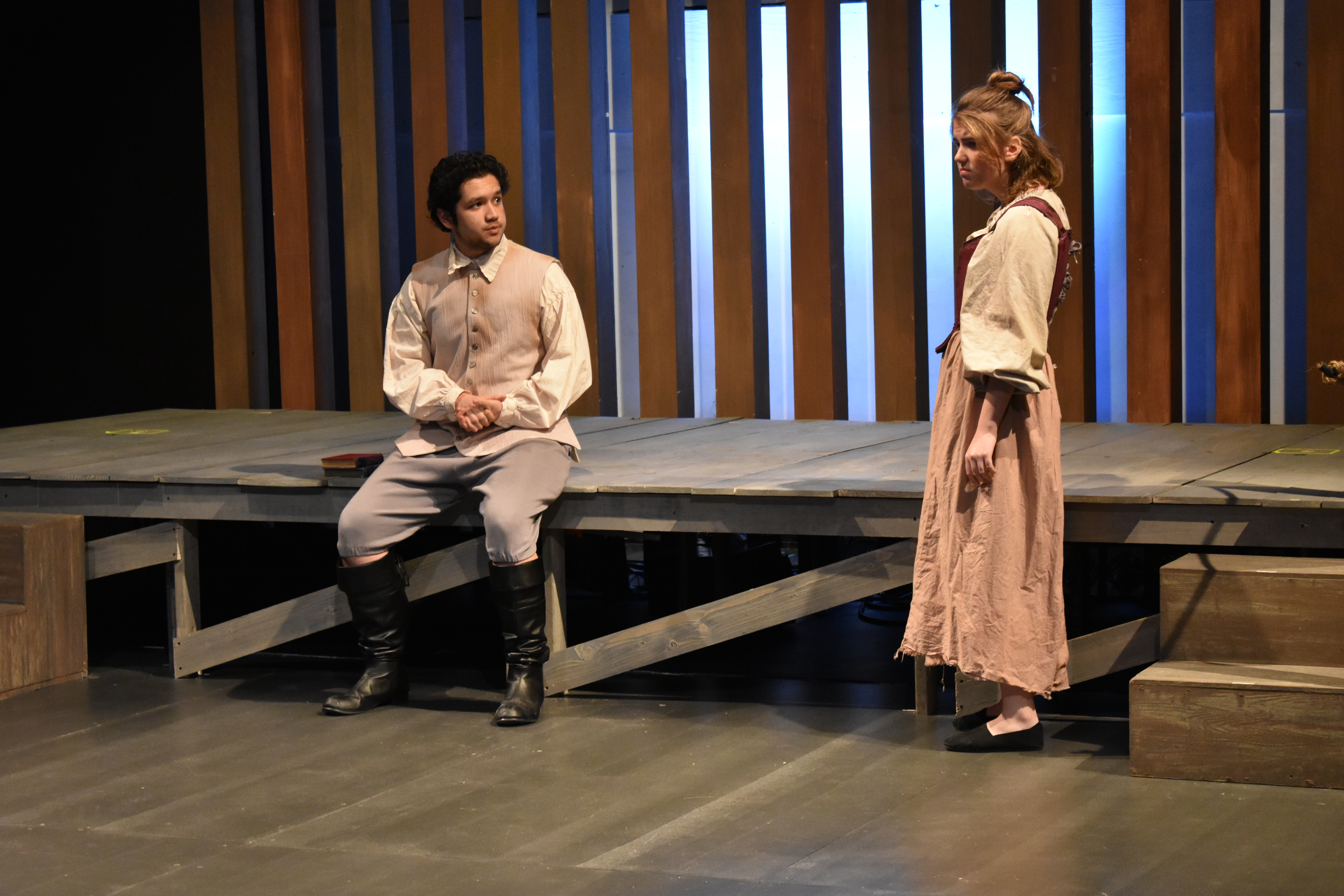 In one scene of “Our Country’s Good,” the latest play put on by the Mason Players, a character of the play is dying. He lays on the floor, on his back, while his love interest sits next to him on the floor. She promises all that she can give as incentives for him to stay alive: her fidelity, her love, everything she has.

As he dies, several of the ensemble members are hitting the floor, surrounding the two characters in a circle, resembling a heartbeat. As he comes closer and closer to death, the heartbeat becomes slower and slower, in contrast with the grand proclamations the woman is making to save him. When he finally dies, the heartbeat dramatically stops—as do the woman’s proclamations. She states that she loves him and then starts to cry as the scene comes to a close. This is just one example of the drama that occurs in the play, which will run for two weekends in TheaterSpace, a highly versatile black-box venue located deep within the de Laski Performing Arts Building.

With multiple storylines involving multiple characters, the main plot of “Our Country’s Good” concerns an officer trying to put together a play using convicts in 18th-century Australia.

Even though the play was written more than 30 years ago, in 1988, it still resonates today, as some of its themes include identity and the struggle to find one’s place. Associate Professor of Theater Kristin Johnsen-Neshati, one of the directors of the production, said about its relevance, “With people being kind of pigeonholed or told, ‘Well, wait a moment, you have this background in this way, so the way we’re pigeonholing you right now is we’re going to see you as something other than what you are.’ So, I like those aspects of the play. I think there is a lot to think about for audiences and for actors taking on the text.”

She continued, “I’d like [the audience] to look at these stories from the past and focus on how many possible ways they can apply to us today, what we can get from something that seems very distant, that seems to be unfolding in a completely different part of the world in a completely different time period, and then to look at how the stakes that the characters are experiencing speak to us. And to look at the role of the arts, as well, the power of the theater.”

Both the actors and crew members of the show have been rehearsing for the past five weeks, though planning for the production began last spring. Much thought was put into every decision made, from the design of the set to the lighting in each scene.

As Johnsen-Neshati and her co-director, student Ben Maderi, put the play together, there were many others involved, from Nick Horner, the voice consultant, to Felicia Hecker, who did costume design, to Austin Shores, the sound designer.

Shores, a theater major with a concentration in design for stage and screen, emphasized collaboration in the process he used to design the lights. “The connection with the director is the most important thing for me, because if we don’t have [the] background of that connection, then our collaboration during tech is going to be—we wouldn’t be on the same page,” he said, “It’s really important to have that connection.”

Johnsen-Neshati echoed that sentiment. “I enjoy that kind of collaboration that goes way beyond what I could bring to a play by myself,” she said. “I think one thing I enjoy most is bringing excellent collaborators together and then just seeing what we can come up with together. And it’s been that way working with Maderi as a co-director. Maderi has handled all of the movement work for the ensemble, and it’s been a lovely exchange, kind of give-and-take, with directing choices. … It’s been a wonderful partnership, and that’s a nice opportunity, for a student and faculty member to direct together.” Another important aspect of the show is that the play itself is fairly diverse, especially for a script published in the late ’80s. The characters include a Jewish man who wishes to become a famous writer, a man from Madagascar who highly values his ancestry and roots, and a strong-willed woman who fights tooth-and-nail against the constraints that society has placed upon her.

Shores helped to convey the feelings of the setting and of the play through sound. “How are we going to fit sounds that we want to add? It’s all about morphing for the text, and how we’re putting it on,” he said.

“I want the moments that I’ve enhanced with the [directors] through the whole process―I want that to be recognized,” Shores said about what he wanted the audience to get out of the play. “It’s really important to me. They don’t even have to verbally say it. I just get the vibe in the room and how things sound, you know? I know when things impact an audience, and that’s really special for me. … Yeah, just that overall emotional impact. Did I enhance their experience? That’s the one question: Did I enhance your experience? If so, awesome, cool.”

“Our Country’s Good” will still have shows from Thursday, April 4 to Sunday, April 7. Tickets can be obtained online at $30 for adults and $15 for students, staff, seniors and groups.