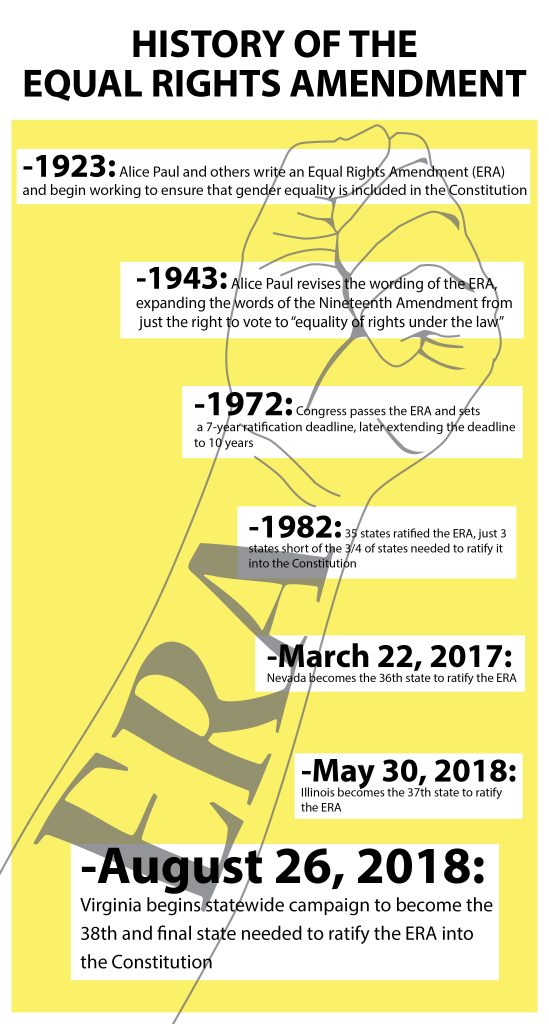 The ERA has been around for decades. In 1923, suffragist Alice Paul drafted the original ERA. Twenty years later, she revised it using the wording of the 19th Amendment and created the ERA that is used today. It states, “Equality of rights under the law shall not be denied or abridged by the United States or any state on account of sex.” It would extend the 19th Amendment protections against gender-based discrimination from just the right to vote to all rights.

By 1982, 35 states had ratified the ERA, but 38 states are needed to ratify an amendment into the Constitution. Congress set the deadline for the ERA to 1982, so without those last three states, the push for the ERA died down until recently.

In 2017, Nevada ratified the ERA, and Illinois followed suit in May 2018. Virginia hopes to be the final state needed to ratify the ERA into the Constitution. According to Kati Hornung, the campaign coordinator for the VAratifyERA campaign, Virginia is “very well positioned” to be that state.

The campaign officially kicked off on Sunday, Aug. 26, to coincide with Women’s Equality Day. Hornung said there is “a big historical synergy” around the campaign. “As a state, we were the last state that ratified the Bill of Rights into the Constitution, so that gives us the opportunity to once again be the last state to put the ERA into the Constitution,” she said.

Women can find it difficult to prove gender discrimination in court.There are other laws that protect against gender discrimination, such as Title IX, but these laws are not in the Constitution. According to Hornung, the ERA could be particularly helpful for college women dealing with sexual assault cases.

“One of the big cases that got lost was with a woman at Virginia Tech,” Hornung said. “When you’re arguing your case and you don’t have the ERA guaranteeing gender equality in the Constitution, you’re having to argue it in other ways. The judicial scrutiny for gender discrimination is at the intermediate level, so women are losing cases because immediate scrutiny is too hard to prove.”

There are two ways that the ERA could make its way into the Constitution. The first is through the legislative branch. The Amendment language does not include the deadline, so Congress could extend the deadline, which it has done before, or remove it altogether. The second path is through the judicial branch, since Article V of the Constitution does not provide for amendment deadlines.

According to Hornung, Virginia has enough votes to ratify the ERA, but “there is still a cultural shift toward equality that needs to happen.”

“It seems on the surface many times that a lot of equality has come into being…but it’s kind of a mirage,” Hornung said. “I feel like I had more opportunities than my mom had, but I want a way more equal playing field for my daughters.”