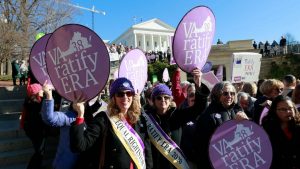 After a long journey through state legislatures, ERA’s future is still unclear

On Jan. 27, Virginia became the 38th state in the United States to ratify the Equal Rights Amendment (ERA). Virginia’s ratification opens up the amendment to discussion over whether it could be in the Constitution in the near future.

The ratification of the ERA pushes forward in its nearly one-hundred-year journey to become a Constitutional amendment. According to EqualRightsAmendment.org, the ERA was written in 1923 by Alice Paul, who was a leader of the women’s suffrage movement and a women’s rights activist with three degrees in law. It has since been introduced in every Congressional session since 1982.

In 1943, Alice Paul rewrote the amendment to what we know it as today. She modeled it after the 19th Amendment.

The current version of the ERA in the 116th Congressional session is as follows:

Section 1: Women shall have equal rights in the United States and every place subject to its jurisdiction. Equality of rights under the law shall not be denied or abridged by the United States or by any State on account of sex.

Section 2: Congress and the several States shall have the power to enforce, by appropriate legislation, the provisions of this article.

Section 3: This amendment shall take effect two years after the date of ratification.

This version of the ERA was introduced to Congress on March 22, 1972, where it was passed both by the Senate and House of Representatives and given a deadline of June 30, 1982 for ratification. Only 35 out of the 38 states required ratified it. Since then, the ERAt has been stuck in a ratification limbo, waiting for support until Virginia’s recent actions.

At the beginning of this year, the Justice Department issued a memo stating that it was officially too late for states to ratify the ERA. The only option remaining for supporters of the amendment is to have each state ratify it again because of an official Constitutional amendment. The National Archives, which certifies and makes constitutional amendments official, stated that it would stand by this memo from the Justice Department.

On the contrary, ERA supporters argue that there is no deadline because it is not currently listed in the preamble of the amendment, making it not legally-binding. They also have begun a push in Congress to remove this deadline. A worry that ERA supporters have is that due to the deadline, some states may rescind their ratification, therefore not making it possible for the ERA to be an amendment.

Virginian lawmakers have made the ERA a priority since Democrats took control of Virginia’s General Assembly. The state will be sending the resolution to the National Archives for now.

Virginia Attorney General Mark Herring has been preparing for potential obstacles in Virginia’s ratification process and is willing to go to court to fight.

Mason student Sydney Hardy weighed in on the matter. “I don’t think that the act will change much, but I do think it will provide legal precedent for those who have been blatantly discriminated against,” Hardy said.

She believes that it’s the ordinary people and not the government that will enforce the change in everyday life. “There is no way to legislate discrimination in a way that will end it because it is a force that has guided this country for ages,” Hardy said. “Slavery was legal. Abolition [was] started by ordinary people. Perhaps this legislation will expand the push to eliminate discrimination, but it will be up to the people, not the government.”