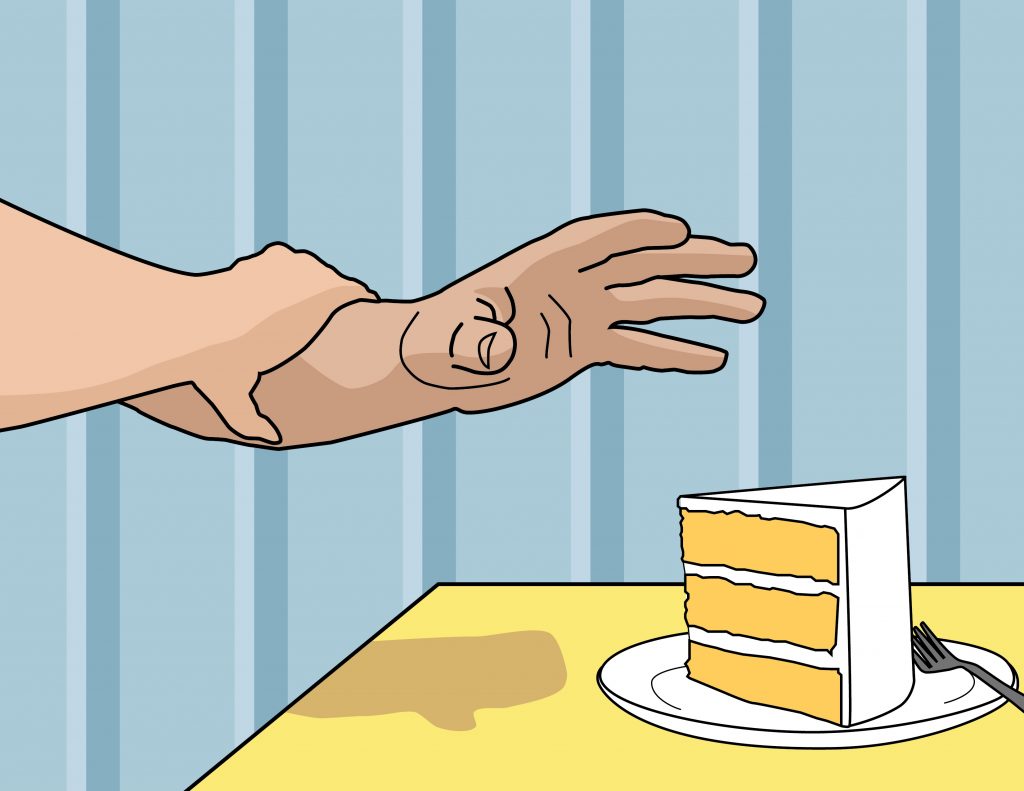 The world is never in short supply of boogeymen, and when it comes to our self-image and sense of worth, the notion of gaining weight is the perfect monster. In a horror-movie worthy spectacle, fatness becomes the monster chasing after us. It waits for us in the line to get mac and cheese. It lurks behind a greasy slice of hot pizza. It lunges out of the vending machine between classes.

At a time when a new student should begin to chase after the academic interests that will define their time as an undergraduate, many are instead being chased by the expectation that they must “keep their weight from slipping” at any cost.

I suffer from anorexia nervosa, which I developed as a sophomore in college. Now as I start my senior year, I look back on the early days of my college career and wonder what might have been the stressful breaking point where eating just became too terrifying. Trying to untangle a mess of memories stored in a malnourished mind is a sad affair but even so, I realized that there was no single decision that propelled me down the path of disordered eating. My fear of food and self-hatred of my body fed into each other while I failed to feed myself at all. I shrank and shrank but no matter how bony I became, I still saw myself as fat.

That monster we create out of fatness is always there, waiting to make us feel like we are not at home in our own skin. It’s a horrible feeling without an easy solution.

Now that I am revamping my efforts in recovery before graduation, I started reading and doing research into why so many young people (women especially, between the ages of 18 and 22) develop eating disorders in college in the first place. I wanted to know why this happened to me, why it is happening to my classmates and why it is probably going to keep happening long after we get our diplomas.

What more than the fear of “freshman fifteen” is there that can make it so hard to feed ourselves?

Even those experiencing partial-syndrome disorders (displaying signs of frequent dieting, occasional binging/purging or fasting) are suffering from an internal battle where food is categorized as “good” and “bad.” Eating a cookie at the mandatory dorm meeting? Bad. Working out at the gym until you’re aching all over? Good. Salad again for lunch? Good. Eating take-out with friends? Bad. It is more than exhausting to start this uncompromising approach to eating, it’s dangerously indicative of disordered eating.

Cycles of guilt, worry, loathing, self-consciousness all circle round and round in the space of the thoughts that should be there. I never realized before this year how much time I have wasted in being trapped in my own disordered mind. Every minute spent agonizing over “What did I eat today? How many calories can I burn before I go to sleep? What can I afford to eat tomorrow without gaining a pound? Do I look fat?” is a minute not spent learning new things, making friends and enjoying life.

The fact is, many students lose weight during the first year of college. And those who do gain it typically gain around five pounds, not fifteen! Rather than agonizing on the scale or in front of the mirror over the possibility of having gained a pound or two, we should be encouraging one another to gain experience, friendships and knowledge. That’s supposed to be why we’re all here, isn’t it? Instead of cutting out carbs, let’s cut the toxic myth of “freshman fifteen” out of our lives.