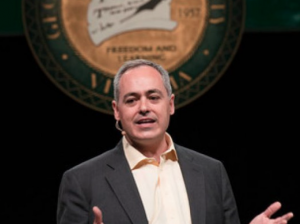 Editorial Note: In Koch Uncovered: Part 1, the Fourth Estate investigative team described how billionaire businessman Charles Koch conducts a “talent pipeline” at Mason to cultivate student and faculty talents to serve ideological and political goals. In the following piece, the team further explores how the Mason administration is involved in Koch’s strategy. You can find the full story online at gmufourthestate.com.

“We have voluntarily supported universities and foundations who are philosophically dedicated to the destruction of our business and of what remains of the free market,” wrote Charles Koch in an article for “Libertarian Review” in 1978. “This must stop. We must stop financing our own destruction.” 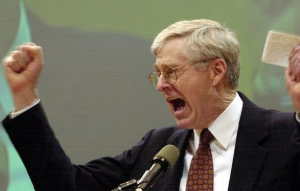 As discussed in the previous part of this story, Charles Koch administers a “talent pipeline” through his donations to Mason, using the Mercatus Center and the Institute for Humane Studies. This talent pipeline enables Mason to cultivate students and faculty alike to later serve Koch’s ideological goals.

On March 22, 2018, President Cabrera sent an email to Mason’s faculty stating that he has accepted an additional $5 million from the Charles Koch Foundation on behalf of Mason’s Economics Department. Cabrera has stated that this new donation is “a recognition of the [economics department’s] past achievements and a vote of confidence in its future.”

The new grant agreement, given to Fourth Estate by UnKoch My Campus co-founder Samantha Parsons, stated that part of this funding shall be used to create positions for three professors on track for tenure. Another term within this grant agreement was that these faculty members were also to be granted access and affiliation with the Mercatus Center.

All donations to Mason are facilitated through the GMU Foundation, a private entity created by the school to handle such donations, under the direction of President Janet Bingham. Bingham also serves as the vice president of Advancement and Alumni Affairs and vice president of the university.

Members of the faculty senate have expressed great concern for donations like these and their effects on Mason as a whole.

“The GMU Foundation has been cautious of giving out information,” said professor Chris Kennedy, a third year faculty senate member who also serves on the Ad Hoc Institutional Conflict of Interest Committee.

The Committee was created in 2016 to investigate the GMU Foundation and the donations that they facilitate to Mason-connected institutions, in response to the sudden renaming of the university’s law school to honor deceased Supreme Court Justice Antonin Scalia.

According to public tax records, Koch and a second anonymous donor signed a 2015 grant agreement for $20 million over a five-year period to fund the Antonin Scalia Law School.

Bethany Letiecq, Mason chapter president of the American Association of University Professors, said Bingham and Cabrera are the only officials in the administration that are allowed to know the identity of anonymous donors that give money to Mason.

Àngel Cabrera became president of the university in 2012. Up until 2014, Cabrera served on the advisory board of the Well-Being Initiative, a research program run by the Charles Koch Institute that aims to “advance our understanding of the meaning, foundations, and drivers of human flourishing,” according to the institute’s website.

Michael Sandler, director of strategic communications at Mason, stated in an email with Fourth Estate that because “we’ve been a leader in the area of well-being for more than a decade… it made sense for George Mason University to take part in a conversation about well-being,”

Members of the Faculty Senate have expressed concern that Cabrera’s performance as president and previous ties to Koch damage the principles of faculty governance, leading to a lack of transparency from the administration and controversial donations from the Charles Koch Foundation.

According to Letiecq, the process in which President Cabrera was hired was not conducted entirely according to the GMU Faculty Handbook. According to Section 1.2.5 of the handbook, “Faculty Participation in the Selection of Certain Members of the Central Administration,” “the search and selection process must include opportunities for the general faculty to meet with candidates who are finalists for the presidency.” This amendment was approved by the GMU Board of Visitors in a meeting on Nov. 9, 2011.

However, Letiecq stated that “the BOV disregarded the Faculty Handbook and proceeded with the selection of the university president– in this case, President Cabrera– without general faculty involvement. Students and staff were likewise not included in the selection process.”

One unnamed faculty senator brought three concerns to Volgenau’s attention: that “students do not feel they are very well represented in the Presidential Search Process,” that “involvement in the process began at a very late stage,” as well as “the GMU Administration is not as diverse as the student body.” These concerns came from minutes from a Faculty Senate meeting on Nov. 9, 2011.

Several faculty senators expressed concern about the possibility that the faculty could be presented with a sole finalist rather than a group of finalists for president of the university.

According to the recorded minutes of the Faculty Senate meeting on Nov. 9, 2011, “the search and selection process must include opportunities for the general faculty to meet with candidates who are finalists for the presidency.”

David Kuebrich, the chairman of the committee, hopes to end the investigation with a presentation to the faculty senate by the end of this semester, when he retires.

Kuebrich stated that he has attempted to work with the GMU Foundation and Mason’s administration since he first learned about Koch involvement on campus. He tried to communicate with Dr. Alan Merten, the former president of Mason.

Merten explained that Mason gets multiple donations from across the political spectrum. Kuebrich also said that he asked President Merten for a list of these major donors giving to Mason, but never received it.

Kuebrich stated that these donations and the strings that come attached to them have eroded faculty governance at Mason.

“Across the country, faculty feel like things need to change,” Kuebrich stated in regards to money being given anonymously to Mason and other universities.

Several faculty senate members in the ad hoc committee have expressed concern about the foundation’s inability to discuss or release many of grant agreements related to donations from the Charles Koch Foundation. The hoc committee and Transparent GMU have been submitting Freedom of Information Act (FOIA) requests for these documents since 2014, which have been repeatedly rejected.

Sandler told Fourth Estate that the administration does not feel that these donations compromise the academic integrity of the university.

“If any donor ever threatened our academic freedom, we wouldn’t take their money,” Sandler said.

Some members of Mason’s administration were appointed to the faculty senate’s Institutional Conflict of Interest Committee. Fourth Estate has reached out to the administrative members, but only two have responded for our request to comment.

Bingham was a member of this Committee until she resigned in December 2016. Dr. Bingham said “[she] was delighted to serve on the Conflict of Interest Committee until [she] was informed that the chairman of the committee also is advising the group that is suing the foundation,” and that she “withdrew at that point because the chairman had not disclosed this conflict.”

The chairman, Kuebrich, is the former Faculty Advisor for Transparent GMU. He stated that he was only an advisor for a year, and was not aware of the organization’s plan to file a lawsuit against Mason and the GMU Foundation.

Letiecq also commented on Kuebrich advising Transparent GMU. She said, “He told me his role as advisor had been in name only, and while he was surprised to learn about the lawsuit, we did discuss how pleased we were about it because [Kuebrich] and other faculty senators had been asking for more information about the GMU Foundation gift agreements going back to at least 2011.”

Elizabeth Woodley, Mason’s FOIA Compliance Officer, also serves on the Institutional Conflict of Interest Committee. Woodley is responsible for responding to FOIA requests “on behalf of George Mason University for all departments, schools, and activities without delegated authority.” She declined to comment on her involvement with the committee.

Within these grant agreements, several provisions were put into place surrounding the money that the Antonin Scalia Law School will receive until 2020.

One of these provisions states that these donations must fulfill the “school’s mission” as described in the contract. Although the exact definition of this mission is unclear from the document, another clause states that a part of that mission includes Henry Butler remaining as dean of the law school.

The agreement also states that the donor has the right to pull the funds if they so choose, and that the donor must be notified if any part of the “mission” is not fulfilled, including any changes in Butler’s position.

Henry Butler, former dean of Mason’s School of Economics and current dean of the Antonin Scalia School of Law, has had close ties to the Koch family for the last two decades, according to a New York Times article published in 2016, and is closely connected to the GMU Foundation.

Other schools that have received significant donations from Charles Koch, such as Florida State University (FSU), identified similar “trigger clauses” in their respective grant agreements and allege that such clauses have led to serious curbing of academic integrity.

In part three of this story, the investigative team will describe similar situations at schools such as FSU, as well as the Mason administration’s description of the school’s relationship with the Charles Koch Foundation.