Student organizations united to speak out in Wilkins Plaza

“We believe that every student has a right to feel safe in a school environment,” said speaker and Fairfax County School Board member Karen Keys-Gamarra. 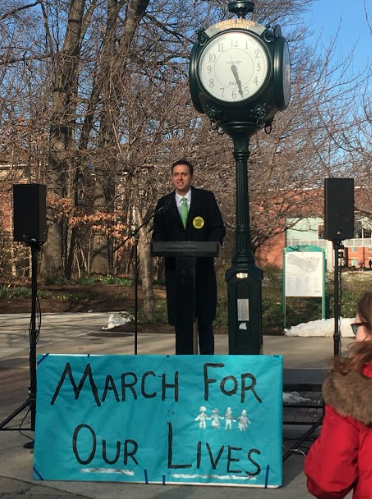 The event was organized by Mason students Evan Baines and Jamie Thomas in the aftermath of the March, 2018 mass shooting in Parkland, Fla. that left 17 people dead at Marjory Stoneman Douglas High School.

“After the shooting in Parkland and the announcement of the March For Our Lives, our members and e-board felt as if we needed to provide an outlet for Mason students to have their voices heard and demand change,” Baines and Thomas wrote in a joint statement to Fourth Estate before Friday’s rally.

Speakers from the Virginia House of Delegates, Moms Demand Action and the Pride Fund to End Gun Violence spoke to the audience of Mason students about the need for gun reform and the importance of getting involved in the political process through voting and activism.

“Change is coming, and you guys are the ones to make that change,” said Jim Sollo, a member of the Virginia Center for Public Safety. “Tomorrow is not the end — it is just the start.”

The rally was co-sponsored by George Mason Democrats, NextGen Mason Rising, Black Student Alliance and other campus organizations. Members of GMU Student Power and Transparent GMU led the crowd in chanting, “Enough is enough!” and “No guns, no NRA!”

“I think that we as a student community have a responsibility to stand up and make our voices heard of what we think about those issues,” Baines explained after the rally. “I think there’s a way that we can support the Second Amendment in a way that is responsible and in a way that actually saves lives in this country.”

Baines read from a list of students’ demands for the university at the rally’s end, including requests to increase funding for Counseling and Psychological Services (CAPS) restored to the office’s 2014 budget level, release details of the 2003 endowment from the NRA Foundation to create the Patrick Henry Professorship of Constitutional Law and Second Amendment Chair at Mason’s Antonin Scalia Law School, and a pledge that the university will no long accept money from the NRA.

“I think the most important thing to note is that this work doesn’t stop now,” Thomas said after the rally. “You can’t just go to a march and expect that issues like this are going to end… I think that it’s really important for people to know that you need to elevate your voice every minute of every day.”

Speaker Mara Schoeny, associate professor from the School of Conflict Analysis and Resolution also recommended that students continue their activism and involvement after Saturday’s protest in D.C.

“March forward,” she advised the crowd, “but be in it for the long haul.”

Executive Candidates debate in the JC