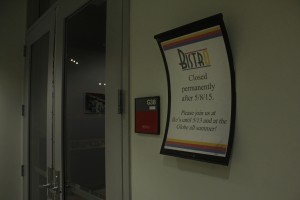 The vacant JC Bistro sits at the bottom of the Johnson Center. (Claire Cecil/Fourth Estate)

The Bistro was closed in May for renovations and will reopen as an event space. Renovations are scheduled to begin in the summer of 2016.

Mark Kraner, Executive Director of Campus Retail Operations, stated, “It has always been a need to have more student event space during the day. [The] Bistro was available for evenings and weekends … Space is in demand at all parts of the day, and the goal was to allow more access to student groups as well as others.”

Other circumstances played a role in the Bistro’s closing. The opening of Panera Bread last fall combined with the various changes made to faculty and student meal plans caused the average number of people eating at the Bistro to drop to 150 per day, according to Kraner.

“Over a three hour period, it was difficult to maintain the operation,” Kraner said in reference to the high amount of effort required to keep the Bistro open for such a small crowd.

The Bistro was located on the ground floor of the Johnson Center, across from the WGMU broadcasting booth. It was a buffet-style dining hall specifically designed for faculty and staff, who received a discount.

However, once faculty and staff meal plans expanded to allow access to Southside, Ike’s and the Globe, the Bistro lost many of its regulars.

The implementation of the Anytime Dining meal plan last fall also caused the restaurant to lose customers, since the new plan prohibited students from using meal swipes at the Bistro.

The Bistro, which has a capacity of 300 people, was frequently used for small music festivals and student gatherings in the evenings. Mason’s Poetry Club held open mic nights the last Wednesday of each month in the space The purpose of the new space will be to host more student events at various times of day.

The cost of the project, which will cover renovations on both the restaurant and its kitchen, has yet to be decided, according to Kraner. Currently, the renovations are still in the planning stage, and no timeframe has been set.

The space will feel larger upon completion, Kraner said, since developers are planning to remove the “half wall” that divides the area where seating used to be.

“Work is being planned to remove some of the service equipment at this time,” Kraner said.

As for whether or not the Bistro will be missed, Kraner speculates that there will be some who miss it, but that, “the numbers showed that the opportunity to eat in Southside, Ike’s and the Globe was something many more wanted.”