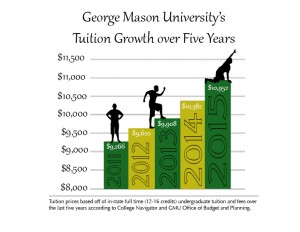 In the midst of skyrocketing tuition prices, a new program will reach out to those most affected by this trend.

Approved by the Board of Visitors on May 6, the Mason Access Initiative is a $1 million fund/program designed to help the school’s most disadvantaged students afford the rising cost of a Mason education.

Last semester, GMU Student Power circulated an online petition supporting Mason Access. According to that document, the student group was most concerned with how higher tuition would affect underprivileged groups.

“George Mason University must act now to make sure students who will be most affected by tuition increases, such as first generation, low-income, undocumented, and homeless students, are protected and provided a safety net that ensures their continued success at our university,” the petition read.

Kalia Harris, a member of GMU Student Power, said the financial aid Mason Access will offer will not be limited to helping underprivileged students exclusively, but will also provide assistance for students experiencing family emergencies or other drastic situations.

“It’s really just an emergency fund for students who don’t see a way to pay for their tuition,” Harris said.

Another goal of the initiative is to extend financial literacy programs at the university.

Rose Pascarell, Vice President of University Life, said discussions concerning this portion of Mason Access concluded that “students would benefit from increased financial literacy, particularly around the debts that they’re incurring and the debts they graduate with.”

“That’s about the time several student leaders and student groups were saying, ‘Hey, this access issue is critical for our students,’” Davis said.

Pascarell said accessibility has been a recurring issue discussed in her regular meetings with Student Government, who also contributed to developing Mason Access.

“Certainly Student Government as well was actively involved in these conversations, talking with us and working with us over the past year,” she said.

Other members of student groups also talked with administration. Rodrigo Velasquez, a member of GMU Student Power and president of Mason DREAMers, met repeatedly with University Life over the summer to work out details of the initiative. He said the approval of Mason Access was an achievement for the undocumented community.

“It’s a great victory for the students I work with and the community we’re a part of,” Velasquez said.

The petition spread by GMU Student Power also received close to 700 student signatures, according to Pascarell. It was presented at the BOV meeting on May 6, the same day Mason Access was approved.

All parties involved were motivated by a concern that Mason will become less accessible as tuition prices continue to rise. At Mason, tuition and fees for undergraduate in-state students increased 26.1 percent between the 2010-11 and 2015-16 school years, according to the Office of Budget and Planning. The State Council of Higher Education for Virginia (SCHEV) reported that average tuition for those students at four-year public institutions has increased 37.7 percent during the same time period. However, during that time, Mason’s tuition, which in 2015-16 was $10,952, surpassed the average reported by SCHEV, which is $7,810 for the current school year.

Parsons said a decreasing contribution from the state is the primary reason for tuition increases. While Mason has a responsibility to keep education affordable, Parsons said tuition trends will stay the same unless there are state-level changes.

“Schools should come up with creative solutions, but that only goes so far,” she said.

In 1985, 67 percent of Mason’s budget consisted of state funds and 33 percent came from tuition and other sources. In fiscal year 2015, 27 percent was provided by the state and 73 percent from tuition.

Vice Rector of the BOV Stuart Mendelsohn agreed with Parsons. He said while Mason Access will help the tuition situation, it will not solve the problem on its own.

“It was absolutely necessary, but it’s not the end product,” Vice Rector Stuart Mendelsohn said. “It’s just really one method to try to address the overall affordability issue.”

He said no stone should be left unturned as the BOV tries to find ways to keep a Mason education as affordable as possible.

“I think everything ought to be on the table,” Mendelsohn said.

Parsons acknowledged that Mason has been doing a lot to mitigate higher tuition prices and that it has been difficult for members of GMU Student Power to realize tuition prices have had to increase in spite of these efforts.

She said the group saw “tuition increases were going to other important things. We had to see what tuition goes for. Cuts could hinder other great things Mason is doing.”

Many details concerning the program have not yet been established, such as the date the application will go live. Parsons said GMU Student Power would like to see that happen around mid-September.

Velasquez said everyone involved is trying to get things started as soon as possible.

“The university is hard at work refining everything and making sure it’s all accessible for students for the academic school year … We’re aiming to have it up as soon as possible but at the same time being cognitive that we want something that’s comprehensive and effective,” he said.

The committee led by Crewalk has completed a draft of the application for funds, Pascarell said. She said both committees are “working off an ambitious timeline.”

Davis said that among the duties of the sub-committees is deciding how the $1 million allocated for the program will be spent. She says the amount of $1 million was determined because “we’re trying to balance out making a sizable commitment to a critical new initiative and at the same time making sure we could balance our books.”

Remaining accessible is critical to maintaining Mason’s diversity, a great source of pride for the university, Mendelsohn said. He mentioned this issue goes hand in hand with the school’s commitment to grow.

“One way to grow is growing in a diverse way and not by excluding people who can’t afford it,” he said. “I just think that’s part of the culture of Mason.”