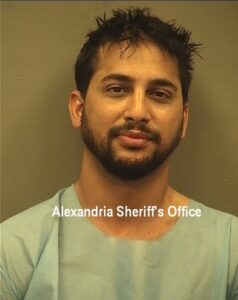 Editor’s Note: A previous version of this story noted that John Hollis confirmed Bhasin was a Mason student. He confirmed that the information on People Finder was up-to-date and that is it updated weekly.

The overwhelming response since publishing this article has been positive, however, the Fourth Estate recognizes the impact mental health can have on an individual. The Fourth Estate encourages those who have differing views to write a Letter to the Editor.

According to court records, after murdering Jackson, Bhasin then ran naked covered in blood into a parked car on King Street, where a frightened mother and daughter escaped the vehicle. Authorities then arrested Bhasin in that same car. Bhasin later claimed that he believed Jackson had been turning into a werewolf, stating “I killed the wolf,” according to court records.

In the case, Commonwealth of Virginia v. Pankaj Bhasin, Bhasin’s defense attorney Peter Greenspun successfully defended his client on the basis of a not guilty by insanity defense.

The case had originally been declared a mistrial in 2019 after the jury was deadlocked after being unable to decide if Bhasin was guilty of murder or not guilty by reason of insanity.

Five separate doctors had diagnosed Bhasin with bipolar 1 disorder. Assistant Commonwealth’s Attorney David Lord had argued that Bhasin was intelligent enough to fake his symptoms and cover up an intentional and violent crime.

According to court records, on the day of the attack, Bhasin had been living with his parents and struggling with his mental health. Bhasin lied to them about his whereabouts and drove hours to the Four Seasons Hotel in Georgetown, demanding a room and carrying a can of gasoline. According to testimony, he told a hotel worker, “90 percent, if I did, everybody dies…There’s still time to save everyone” and “Today is going to be a bad day.”

After being declared not guilty by insanity, Bhasin was ordered to be confined at the Northern Virginia Mental Health Institute in 2019. After three years of treatment, doctors said that Bhasin was well enough to leave the facility. Alexandria City Circuit Judge Lisa B. Kemler signed a conditional release order on May 19, 2022.

According to court records, Assistant Commonwealth’s Attorney David Lord objected to Bhasin’s release from the facility.

The release order is extensive, including Bhasin being required to take Abilify Maintena, a psychotropic medication, by injection, submit to drug and alcohol testing once a week for the first three months after his release and twice a month for the remainder of his first six months after release.

In addition, Bhasin must pay for his own GPS monitoring at all times and abide by a curfew from 11:30 p.m. to 6:00 a.m Both of his parents, Ramesh and Savita Bhasin must check in with their son and establish that he is either in residence at an apartment tied to a mental health agency, or living with them in Alexandria or Fairfax County.

The release order also maintains that home visits are to occur by the Alexandria Community Services Board weekly for the first two months of Bhasin’s release and decrease to monthly visits.

While it is unclear exactly when Bhasin applied, he was accepted into the Master of Business Administration program at Mason for the Fall 2022 semester. According to the Master of Business Administration application, there are no options to indicate whether an applicant has committed a felony. Due to the not guilty by insanity ruling, Bhasin does not have any criminal record and was promptly accepted into the program. On the topic of mental health, it is under the discretion of the applicant to disclose any mental health struggles, according to Inside Higher Ed.

According to People Finder, the Mason University Directory, Bhasin is listed as being a student and going by “PK”. “PK” is a nickname that Bhasin used while on dating apps.

John Hollis, Mason’s Media Relations Manager, was able to confirm to the Fourth Estate that the information on People Finder is up-to-date and is updated weekly.

The Fourth Estate can confirm that Bhasin is enrolled and attending classes in person at either the Fairfax or Arlington campus, where classes are offered for the MBA program.

In August 2022, Bhasin was spotted on dating apps, claiming that he was “recently getting back from two years of travel.” according to a r/nova Reddit post and court records. The irregularities brought Bhasin back to court in September, where Bhasin was promptly ordered to stay off of all social media except for LinkedIn, according to court records. Bhasin’s LinkedIn currently states that he is a Senior Director at CEE Corporation.

Greenspun and Bhasin did not respond to requests for comment from the Fourth Estate.

After reaching out to Greenspun and Bhasin, Bhasin’s name was changed from “Pankaj” to “PK” on People Finder and his LinkedIn account information was deleted except for his position at CEE Corporation. It previously stated he was on a two-year sabbatical.

Mason’s Counseling and Psychological Services declined to comment on bipolar.

Bhasin is currently due back in court on Dec. 15 for a reassessment of his release conditions.

PATRIOTS ARE VICTORIOUS FOR FIRST HOME GAMES OF THE SEASON