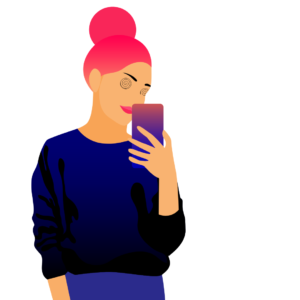 Every morning, despite knowing how bad it was for me, I woke up and immediately opened Instagram or Twitter. For the life of me, I couldn’t stop doing it.

It’s not like I enjoyed seeing the same old recycled memes on my explore page or being bombarded with opinions about things I didn’t understand from people I didn’t know. It’s a good thing I never downloaded TikTok—I harbored enough self-love to never subject myself to that hellscape.

Still, I was held captive by this urge. Why couldn’t I just put my phone down? How could I fix this problem?

So, in June 2022, I decided to delete Instagram and Twitter. It was unceremonious and I figured I would be back in a couple of weeks, at the most. It’s now been over four months since then and I haven’t redownloaded either app.

I could say that my mental health has improved drastically. I could say I wake up every morning at five, go on a three-mile run, then come home to sip some green juice, but I’m not a liar.

Yet, there have been small changes. For one, I read a lot more now. Granted, the books I read are less on the side of intellectual heft and more on the side of trashy romance, but a book is a book.

My mind is less polluted with whatever I see on the internet that day. I can’t say I ponder philosophical questions but my brain is a little less…crowded. If you think about it, the amount of information social media crams into your brain is abnormal.

There have been some unexpected consequences to this cleanse. For one, it’s been a little weird making new friends. I struck up a conversation with one at a club meeting not too long ago. She asked for my Instagram.

Thankfully, she took it in stride and asked for my number. That’s right, folks—I gave my number to a practical stranger. Not the growth I was looking for but beggars can’t be choosers. Now I talk to that girl on a weekly basis and we’ve hung out a few times. Maybe if she’d only walked away with my IG handle, we would’ve never seen each other again and instead been doomed to watch each other’s stories till the end of time.

There has been one big downside, though. Internet culture and the circulation of memes are such a huge part of the world today. Internet slang is threaded in the undercurrents of the youth’s speech today. It’s such a big part of what Gen Z is.

The other day, my brother mentioned the word “rizz.” “What is that?” I asked with a furrowed brow. “Oldhead,” he sneered.

Unfortunately, I do know what that means and I feel a little left out. It’s like I don’t belong in my age group because I don’t know what’s cool anymore. If you think about it, eventually, the younger generation will replace ours and we’ll all be uncool. I’m just getting a head start.

Has this cleanse been worth it?

I can’t say I’m less distracted from schoolwork—instead of opening Twitter, I’ll just watch something on YouTube. However, my mind feels more at peace these days. There’s less compulsion to pick up my phone and fewer bits of useless information floating around in my head.

Who knows? Maybe one day I’ll go back to the world of social media but for now, I’m happy being an oldhead.