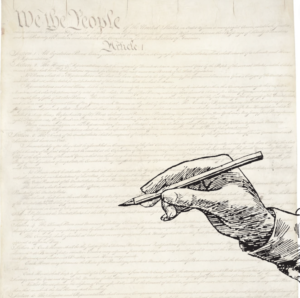 The First Amendment right of free speech is now more important than ever for the journalism industry as we navigate a new era of what it means to be a journalist.

The only profession explicitly named and protected by the U.S. Constitution is the press:

“Congress shall make no law respecting an establishment of religion, or prohibiting the free exercise thereof; or abridging the freedom of speech, or of the press; or the right of the people peaceably to assemble, and to petition the Government for a redress of grievances.”

Throughout history, the press has fulfilled its role as a watchdog and gained the trust of American citizens by breaking important political stories such as the Watergate Scandal and the truth about the Vietnam War. However, in recent years, American confidence in both print and television news has plummeted. This can be attributed to many things including polarizing political rhetoric, the rise of social media as a news outlet, and a change in consumers of news.

The rise of social media platforms has changed how we share and consume news, often allowing regular citizens to break big stories simply with the click of a button. Social media is also not bound by the same rules as traditional journalism. The internet is saturated with “fake news”, violent rhetoric, “alternative facts” and information spread without any corroborated sources.

This change has slightly blurred the lines of what it means to be a real journalist and begs two important questions: What is real journalism? And, how can we filter through the noise while still preserving freedom of speech?

Although the answers to these questions are not yet completely clear, it is obvious that the first step must be a commitment. Yes, many people see the industry decaying and trust declining. However, it has never been more important, for young people especially, to consume the news and trust journalists.

The freedom of the press, protected by the First Amendment, is imperative in a democratic government that works for its people. In order to prevent the patterns of declining democracy we have seen recently, we must find confidence in journalists again.

True journalism is characterized by truth, accuracy, independence, transparency, accountability and of course, the freedom of speech. And now more than ever, we must remember and respect those who devote their time and energy to it.

JOIN THE FIGHT AGAINST BRAIN CANCER