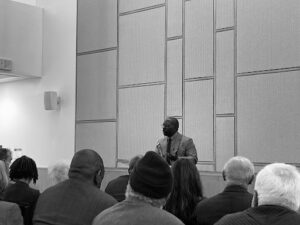 A lecture on American politics with a New York Times columnist

Students, alumni and Fairfax patrons gathered in the Fenwick Library for the annual Roger Wilkins Lecture on April 5 with The New York Times columnist, Jamelle Bouie, to discuss the many timely issues with American democracy.

Bouie is a graduate of the University of Virginia, and specializes in political and culture opinion articles for well known media companies such as The Daily Beast, Slate and, most recently in 2019, The New York Times.

“What’s the matter with American democracy? It’s that we don’t have enough of it,” Bouie said as he began his speech.

He stated that America’s political system is severely lacking in equality amongst minority citizens that has lasted for centuries, stemming from developed prejudices from slavery and the laws created to limit public involvement in elections and law making decisions. This includes unfair methods of obtaining winning votes such as gerrymandering.

“In Wisconsin, gerrymandering is so bad that democrats often win upwards of 60% of the votes that control a bare majority of seats in the legislature,” Bouie says.

In order for democracy to reach a desired state of equality, Bouie suggested a few ideas that he acknowledged “may not ever happen, or at least won’t in the near future” but which can provide a useful template for the branches of the government to take note of and possibly implement in small quantities.

Voices being heard by all parties would be a big step in reaching a more even playing field, including an emphasis on ones who are incarcerated. “[Incarcerated people] remain citizens, and they are going to count for representation,” Bouie said.

He suggested that changing the constitution to reflect a more modern democracy of change and equality would greatly help the fairness of elections.

“We are in possession of the same abilities, same virtues and same capacity to rethink and re-envision our political system,” Bouie said.

Lastly, being financially transparent with the public as well as educating current and future voters on the benefits and consequences of laws could help citizens become more involved in political debates.

As the lecture came to a close, Bouie ended his speech by stating that economic and political independence goes hand in hand.

“Try and find a way to integrate that into our democratic understanding. Providing some measure of economic support and independence given the reality of the wagering to support democracy,” he said, further stating that there is a current imbalance of fairness both politically and financially that can be easily changed through better institutions and more transparent laws.

Students, anybody who is interested in moving into the political field and people who already are, got a look into Jamelle Bouie’s vast knowledge of politics and a brief history lesson into how our democracy became what it is today and ways it can be improved.

THE SCHOOL OF THEATER AND MASON PLAYERS PRESENT “EVERYBODY”