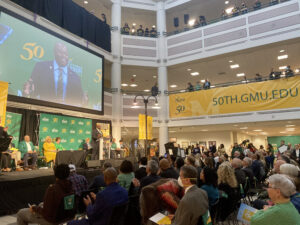 Mason marked its 50th anniversary with a Commemorative Celebration on April 7 at the Johnson Center. This anniversary marks the half-century since former Governor Linwood Holton signed legislation to establish Mason as an independent member of the Commonwealth System of Colleges and Universities on April 7, 1972.

The Green Machine welcomed guests with a playlist of songs including Beyoncé’s “Crazy in Love” and Paramore’s “Misery Business.” Members of the band’s dance team, Emerald Desire, were seen three floors below on the main level performing in choreographed and synchronized routines.

Programs, rally towels and other Mason freebies were handed out to people walking near the kiosks before the ceremony began. The Mason Patriot mascot could be seen engaging with the crowd, including the section blocked off for special attendees such as local politicians, the board of visitors and other faculty members.

Mason’s own Doc Nix, along with more members of The Green Machine, led the speakers to the stage. Almost immediately following, a short video played that summarized Mason’s history before the university gained its independence fifty years ago.

The video explained that Mason’s roots began as an extension of the University of Virginia in 1957. Formerly called University College, the campus was designated to be operated out of an “abandoned elementary school,” according to Robert Vay, the Digital Collections & Exhibitions Archivist who was featured in the video. The 1964 relocation to Fairfax had four buildings “open for business”—north, south, east and west, according to the video. Those buildings are still in use by Mason students and faculty today.

Rick Davis, the Dean of the College of Visual and Performing Arts and Executive Director of the Hylton Performing Arts Center, hosted the event and presented each speaker.

Former interim president Anne Holton was among one of the first speakers. Holton is also the daughter of former Governor Holton who established Mason as an independent University. She made several references to his legacy during her short yet engaging speech.

“This place never ceases to amaze me. It is a source of real pride for me that my family has played a meaningful role in the rise of this university… my dad who passed away last October at the ripe age of ninety-eight, was so proud of this university and what it stands for and let me tell you, so am I,” Holton proclaimed.

Also in attendance and on the list of speakers was Rector James W. Hazel, whose father was a founding member and patron of Mason. Jon “Til” Hazel recently passed away this year at the age of ninety-one.

Student Body President Natalia Kanos also gave a speech that mentioned her optimism for the future of the university.

“Rome was not built in a day and neither is Mason nation. We have come such a long way and there is still a lot left to accomplish… from Mason’s Master Plan being kicked off… to President Washington’s Mason Virginia Promise, even to our developing and advancing sports teams… I am excited for the future of Mason because I have no doubt that Mason will be making an impact for years to come,” Kanos revealed.

President Washington gave concluding remarks towards the end of the ceremony. Before the bulk of his speech, Washington was sure to thank fellow speakers and acknowledge the six university presidents that served before him.

In a surprise move that generated gasps and a wave of applause from the audience, Washington announced that members of the Dewberry family have agreed to a financial commitment to “transform the Center of the Arts” on campus.

MASON VISION DAY RAISES OVER $130,000 FOR THE GREEN MACHINE