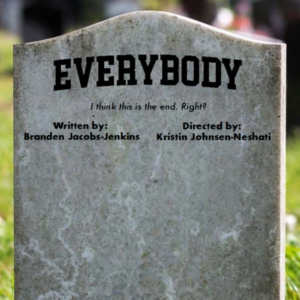 Photo Courtesy of the School of Theater

An unconventional play on life and death in Harris Theater

The Mason Players and the School of Theater are back with a performance that will keep everyone on the edge of their seats–even the cast members. “Everybody” opened last Thursday, March 31 in the newly renovated Harris Theater, and will continue to run through this weekend, ending with a matinee on Sunday.

The play itself is a thought-provoking narrative on death, brought to life with a charming script and a series of surprising tricks that break expectations.

Written in 2017 by Branden Jenkins-Jacobs, “Everybody” is based on a much older play by a similar name: “Everyman.” “Everyman” was a 15th century morality play that followed its protagonist, referred to by the titular name “Everyman” as he tries to frantically prepare for his impending death.

“Everybody” follows the same general plot, with a protagonist grappling with what it means to be on the verge of death, but incorporates modern quirks that bring the play to life in a more relatable sense. Most significant is the unique casting situation: rather than the actors each having an assigned role to prepare for, the roles were determined by a lottery system in the beginning of the show.

This trick meant not only that every cast member must be fully prepared to play any character, but also that they all had to be prepared for any combination of castings, with what cast member Hansin Arvid announced to be 120 possible combinations.

“We had to imagine multiple scenarios and allow for the actors to bring their individuality to their interpretation of their roles. We also had to imagine how certain scenes would play out, depending on which actors were addressing each other,” said director Kristen Johnson-Neshati.

“One big challenge is to give each scenario adequate rehearsal time. We also needed to establish a strong ensemble that could shift easily and support each other fully, no matter how the lottery played out each time,” Johnson-Neshati continued.

This lottery system was not just a theatrical quirk–the choice to leave the casting up to chance was intended to represent the ever-looming threat of death, bringing the sense that death is random and often unexpected beyond the dialogue of the play, but weaving it into the fabric of the performance.

In the performance on Saturday, April 2, freshman Aadith (August) Iyer got the leading role, and he stepped into the role seamlessly. His character, suddenly chosen by Death, has to scramble to prepare for what might await him after he dies. In consulting with a vibrant cast of characters like “Friendship” and “Family,” he begins to question what parts of life really have the most value.

Throughout the entire show, the play made bold, unexpected choices that played with the audience’s perception of reality and the very structure of performance: breaking the fourth wall, leaving the stage to circle the audience, plus some more tricks that you’ll have to see to understand. From start to finish, it was unpredictable and offbeat, bringing a quirky charm to what could easily have become gloomy and existential.

Tickets for the remaining shows are $30 for general audience, $15 for students and staff, and a limited number of free student tickets are available on Mason360.