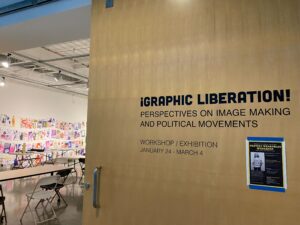 Since January, the Gillespie Art Gallery in Mason’s Art and Design Building has been host to a vivid collection of posters, books, fliers and more that demonstrate the way art can be used in social movements. This is ¡Graphic Liberation!, a moving exhibit-slash-workshop brought to Mason by designer Josh Macphee, and it will remain at the Gillespie Gallery until Friday, March 4.

The walls are lined with posters, books and album covers, featuring raised fists and slogans like, “Dismantle the Corporate Landscape” and “Smash the Patriarchy!”. This is not a traditional art exhibit; it’s a combination of art, history, and politics all immersed in a culture of social liberation and political communication that is at the root of this type of graphic artwork. 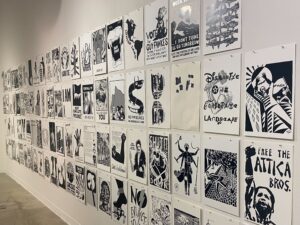 As described on the exhibit’s website, “It counters the dominant narrative by demonstrating how graphic ideas circulate across grassroots movements and evolve through a horizontal network of exchange that often involves copying, iterating, and evolving common symbols and imagery for use in international contexts and struggles.”

A primary focus of the use of graphics and symbols as a tool in creating social change. Take, for example, the symbol of a raised fist; the symbol has a long history, believed to date back to the French Revolution, and has been used for decades as an unmistakable marker of the Black Power movement.

Many of the artifacts in the collection feature raised fists, alongside other social symbols like the venus, used in women’s rights campaigns, and the pink triangle, used as a symbol for LGBT rights movements. These symbols all served as a way to express your ideology in a way people could easily understand.

“Most people in their lives don’t have time to read a treatise on, like, any particular issue,” MacPhee said. “So creating a common set of iconography that communicates ideas is a powerful way to make a connection.”

MacPhee is the founder of an artists cooperative organization called JustSeeds, as well as Interference Archive, and the journal Signal. He says that this collection of iconography and ephemera has been building throughout 30 years of research and work.

“It’s not often talked about, [that] the tradition of political graphic poster production is as much of a storied history as painting or any other art form. And so this is basically 30 years of doing and researching put together in an attempt to create an experience where you can both look at and see this history, but also participate in the making,” MacPhee said.

In the spirit of the participatory and collaborative nature of this type of work, there’s more to it than just viewing the posters. The gallery holds a risograph, a type of printer and duplicator that allows the user to quickly make large amounts of copies of posters in layers, color-by-color, creating a final product similar to a screen-printed work. Anyone is allowed to stop into the gallery and use the machine to create their own works.

Though the exhibit’s time at Mason is ending soon, it doesn’t mean you can’t continue to engage with the history and tradition it demonstrates. According to MacPhee, the best way to carry on the tradition that this exhibit is promoting is not necessarily through art, but through social engagement.

“The more posters in the world, the better. But almost none of these pieces were made by people looking to express themselves,” MacPhee said. “These are all people working in communities, with organizations, with movements, and so the real way to be a part of this tradition is to work with other people as part of attempted social transformation.”

“What do you care about? Is it the climate? Is it the movement for Black lives? Is it women controlling their own bodies?” he asked. “Figure out what really matters to you, and either join an organization that’s already working on those things, or form a group with your friends … and then start making stuff about it and putting it out in the world, and see what happens.”