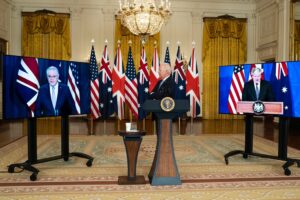 The Australian government makes a formal decision on nuclear-powered submarines

On Wednesday, Sept. 15, 2021, President Joe Biden stood in the East Room of the White House, joined virtually by Australian Prime Minister Scott Morrison and British Prime Minister Boris Johnson to announce that the American and British governments would be providing Australia with the technology to build nuclear-powered submarines.

This alliance, known as AUKUS (Australia, United Kingdom, United States), will create a unified alliance against Chinese aggression in the Indo-Pacific Region.

However, one of the biggest news stories is that Australia finally ended what has been a decades-long balancing act between the United States and China. With this deal, one thing has been made clear, Canberra decided that it would rather fully cooperate with Washington instead of Beijing.

For many long years, the Australian government attempted to balance its largest trading partner in China and its largest military ally in the United States to keep both sides happy in order to peacefully maintain economic might and military power across the world.

However, with the elevation of Scott Morrison to prime minister in 2018, Australia charted a path more closely aligned with their allies in Washington and the west. While many in Australia and China criticized the attempts of the Morrison government to work closely with the Americans, it is in the best interest of Australia to chart its future alongside the United States and its allies in Europe.

Working alongside the United States, Australia can attain the full might that the American military can provide in the Indo-Pacific Region. This would put Australia at the top of the list of American allies in countering Chinese aggression in the South China Sea.

Providing a peaceful Pacific region is something that has been very important to Australia since the end of World War II. Given this, a close alliance with the United States and the attainment of nuclear-powered subs would greatly benefit the Australian people in the event of future direct aggression from Beijing.

As many less powerful nations in the Indo-Pacific region look up toward the United States to counter China and provide a more stable Pacific region, the deal the Australians agreed upon is a welcoming sign to them.

Japanese Foreign Minister Toshimitsu Motegi suggested that this could be the start of a new alliance of military democracies in the Indo-Pacific. Other nations such as India, Canada, Singapore and South Korea have also issued statements of praise of the new deal.

Even less democratic nations such as Vietnam have welcomed the news of this agreement, knowing that the United States and United Kingdom will be further entrenched in the region as protection against proactive actions that China has taken against Vietnam.

Overall, this agreement will protect the best of Australia’s national security interests in the Indo-Pacific — as it was put by Morrison, AUKUS will be a “forever partnership for a new time between the oldest and most trusted of friends”.