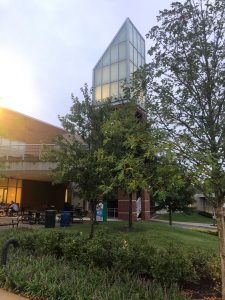 A suggestion for the students of George Mason

We’re all aware of the problem. We arrive at Southside or Ike’s, bellies rumbling, mouths watering, ready to tear apart whatever food gets on our plates. We walk in. And bam! Long lines, missing forks, stations closed. Even the dish drop-off is packed to capacity and beyond. How did things get to be this way?

We have a labor shortage. There are simply not enough people working at our dining halls to be able to operate them at full capacity. Or even half capacity sometimes. When many stations are not open, it can create a jam. When a lot of students show up and there aren’t enough stations open, they get in what lines they can. As time passes, more students show up, making the lines even longer!

All the while, the staff of the dining hall work incredibly fast trying to wash dishes, prepare plates and clean messes — which turns into a stressful situation for the workers. 20 people trying to do the work of 40 means that each person must work incredibly hard to compensate, creating a lower-quality experience for everyone involved.

Southside is billed as being open 24 hours a day, every day. Even the sign at the entrance says that. Yet the reality is that during the night there are only two stations of the 10 in the dining hall that are operational and the entire place closes at 11 p.m. Not exactly what Mason advertised to us before the school year started.

When the dining hall experience gets extremely poor, many people will go to alternative options, like the food court in the Johnson Center (JC). And they might find that everyone else had the same idea as well. So, when they walk in, instead of a nice and breezy experience, they are confronted with even longer lines and the same problems that they encountered in the dining halls.

20-minute waits for food and mismanaged orders are far more common experiences than they should be. So, what can we do to solve this situation?

The solution, as it turns out, is simple. We should just pay people more to work here.

It’s a basic tenet of the free market economy that people will go to work for whoever values their skills the highest and will compensate them accordingly. If we can’t get enough people to work in our dining halls, then it’s obvious the wages Mason currently offers simply are not high enough for the laborers.

The same story is playing out all across the United States right now. Huge numbers of businesses are facing employee shortages because workers are being more selective about where they want to work. Post-Great Recession, when the unemployment rate was high and more people were looking to get jobs, employers had a strong negotiation position. “Our salary isn’t good enough for you? Look around, nobody is hiring so you won’t have any other offers that you can bargain with. This is as good as it gets.” As the economy has recovered and unemployment has fallen, however, the employer’s position has weakened considerably.

In this current competitive labor market, corporations like Amazon and Costco can continue to hire high-quality talent only because they have high enough revenues to be able to afford higher wages. Ironically, it is big businesses such as these rather than the government that lead the push for a $15 minimum wage.

Last week, Walgreens became the latest large company to boost minimum wage to $15 an hour starting in October. Corporate America has sent the message out: $15 is the new floor value. This, combined with the inflation that has come around in the past year, has changed what workers’ expectations are. Simply having a job is not good enough anymore. People want a job with a high wage and high-quality benefits.

Faced with the competitive wages from big box retailers, Mason is also following the trend and offering $15 an hour plus free food and benefits to new hires. But what if that wasn’t enough? It’s not a great job by any means. The hours are variable, it can be thankless and, as it stands right now, it can be an intense environment. The proof is in the pudding. The signs have been up for a while and still few people have been hired. We clearly need to offer more. So how do we do that?

We cannot make money appear out of thin air. Dining halls have budgets just like every other enterprise. The funds must come from somewhere. That somewhere is going to have to be the meal plans of Mason students.

It sounds insane, right? Why should you have to pay more? Between textbooks, parking and tuition, you’re already paying enough to go to school as is. But here is the crux of the issue: You aren’t satisfied with the service you are receiving, but you also aren’t willing to pay to change it. That’s just not how things work.

Clearly having a good dining hall experience has value to you, as you wouldn’t be complaining if it didn’t. That value should have a tangible dollar amount ascribed to it. And if it turns out that whatever you would potentially have to pay is less than the value you get from a good dining hall experience, you’re still getting a bargain. It’s called a consumer surplus.

What would the actual dollar figure be? Based on the data released by the Office of Institutional Effectiveness and Planning, there are probably around 5,000 undergraduate students living on campus this year. Conservatively assuming that half of them have purchased a meal plan for this semester, that’s around 2,500 meal plans.

If we raise the price by as little as 5%, which is a very reasonable raise, an extra $300,000 could appear and be used immediately. That amount would probably allow the dining halls to raise hourly wages by around $2.25 to hire an additional 30 people around the clock and raise the wages of the current workers by the same amount.

That should be more than enough to majorly upgrade the quality of the dining halls. The higher wages will lead to more workers joining, which will open up more stations and reduce the line time as well as upgrading the moods of all the current workers as well. Additionally, it will spill over to places like the JC where the lines will get shorter as more students go to the dining halls to enjoy the enhanced experience there.