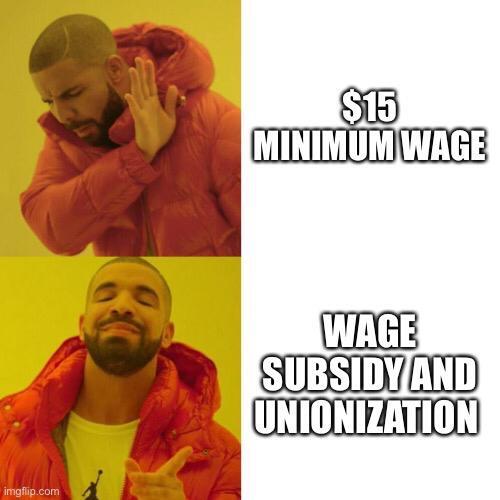 Per a recent ruling by the senate parliamentarian, a $15 minimum wage will not be able to pass the Senate through the budget reconciliation process, which only requires a simple majority instead of the 60-vote supermajority normally required. Even before the ruling, Joe Biden’s rescue plan was unlikely to command the 50 votes necessary anyway, with centrist Democrats opposing the minimum wage hike.

In short, a $15 minimum wage will not pass this Congress. Progressives will decry this as a catastrophic failure for working families, but wage floors were never the most elegant or even the most progressive way to guarantee a viable standard of living.

Students are unfortunately not very well equipped to understand the debate around the minimum wage, although they are among the most affected groups.

On one hand, most college students lean left, and progressive voices have long deplored a $7.25 minimum wage as relegating workers to poverty while millionaires and billionaires get richer and richer. According to this narrative, the minimum wage is the only thing preventing employers from underpaying workers.

On the other hand, in introductory economics classes students are usually only presented with a simple supply and demand model of the labor market where work is a commodity that’s bought and sold, and minimum wages act as price floors that cause surplus supply of labor, or unemployment.

Both of these accounts are flawed. Neither address an economy with far more market concentration than is presupposed by economics textbooks. On one hand, a higher minimum wage doesn’t hurt the “billion-ay-uh” class as much as it hurts small businesses. Additionally, given the same theoretical assumptions as the “minimum wage causes unemployment” argument, minimum wage can actually boost employment given high levels of monopsony power.

While the reality around minimum wage is much more messy than trite political narratives or theoretical models, it is also more simple. Minimum wage is just one of many mechanisms we can use to distribute money.

Our society has the real resources to guarantee everyone a very decent standard of living. There are all sorts of ways to distribute those resources. However, we live in a system primarily designed to reward marginal productivity and capital efficiency — to give people who are good at making stuff purchasing power to procure other stuff.

Because of this, we’ve built our social safety net on top of a system designed to reward work: welfare benefits are work conditioned, Social Security is funded by payroll tax, and most Americans’ health insurance is tied to employment. Minimum wage is part of this workfare regime.

But this is a policy choice. If we wanted to, we could give people unconditional cash benefits that cover the basics, or provide essential goods and services free of cost. But typically, it’s more politically palatable for politicians to pass policies (try saying that three times fast) that “make work pay” than to engage in naked tax-and-spend redistribution.

The distinction is ultimately more political than real. Minimum wage is in fact an implicit tax passed on to consumers in the form of higher prices. And the Congressional Budget Office finds that increasing it to $15 would cause the loss of about 1.3 million jobs. Many of those people priced out of the labor market will end up leaving it for good, relying on public assistance and even filing for disability — among the only forms of social assistance untied to work.

Transitioning to a regime of universal and unconditional benefits funded by plain taxation is a more direct way to help people than trying to find some “right” wage floor to set across the country. But if we want to stick to the current paradigm, there are other ways to make work pay.

Expanding the earned income tax credit — a wage subsidy — can increase the effective wage to a target wage level, even $15 an hour. Wage subsidies have earned support from economists and pundits across the spectrum, and they have the happy effect of pricing people into the labor market by actually lowering costs on employers.

Whereas the minimum wage nominally falls on employers, which voters like the sound of, the cost of wage subsidies is either shouldered by taxpayers or financed through more government borrowing.

An even bolder option would be to reinvigorate union rights so workers can collectively bargain for higher wages themselves. America could adopt something like the Ghent system, where unions are responsible for administering unemployment insurance, which drives up membership while also discouraging them from lobbying for wages that would price too many out of the market.

In contrast to the American system, which can be traced back to the Great Depression-era National Labor Relations Act, the Ghent system facilitates sectoral, rather than enterprise-level, bargaining. This means that wages and benefits are won for entire industries, rather than individual companies — with the effect of compressing wages within a sector and helping more workers.

The NLRA is also grounded in viewing employees and employers as adversaries — labor vs. management, all the time. The European way of doing things is more cooperative between labor and management, which makes sense. There are times when management needs a rebuke from labor, but by and large, both employers and employees are better off when they cooperate with each other.

Like a minimum wage, more organized labor would likely mean higher consumer prices for all of us, but it would be a far more voluntary, nimble and decentralized system than a national wage floor.

In fact, countries like Norway and Denmark that progressives here look up to don’t actually have minimum wages! Instead, they have highly unionized workforces, and a regime of universal benefits funded by general sales taxes.

While Joe Biden has paid lip service to pro-union policies like sectoral bargaining, such comprehensive reforms always take a backseat to politically savvy slogans like “fight for $15.”

The sad truth is that it’s easier to advocate policies like minimum wage, which hurt small businesses on the margins, than it is to engage in labor reforms, which threaten the structures of the largest and most politically organized mega firms.

Giant corporations like Amazon and Costco have preemptively increased their own wages and even lobbied for a federal increase in the minimum wage — how many companies have encouraged their workers to collectively bargain? Large firms like the high wage floor because it hurts their smaller competitors and increases their market power. While it is aimed to help workers, among the greatest beneficiaries of a higher minimum wage are captains of industry.

Minimum wage isn’t a progressive policy. It’s a band-aid on a system where workers don’t have enough bargaining power, and where we refuse to provide an unconditional standard of living. We can do better.

A $15 minimum wage cannot pass the Senate. But what progressives have lost is only the most dysfunctional and blunt instrument of redistribution. If we’re lucky, this will force them to go for the politically harder, but more substantive reforms.

Correction, March 1: A previous version of this article referred to the National Labor Relations Act as the NRLA, not the NLRA. It has been corrected.