As part of the Schar School’s “First Tuesday” Series, pollster Peter Hart discusses the role of polling and how it will impact the 2020 election. 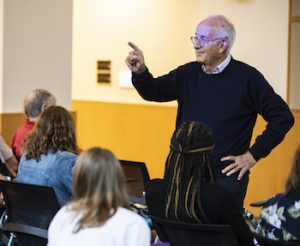 On Tuesday, Sept. 8, American pollster Peter Hart spoke to a large audience of Mason faculty and students via Zoom, discussing American political polling, as a part of the Schar School of Policy and Government and the Honor College’s “First Tuesday” speaker series.

The speaker series concerns the 2020 election and will feature Democratic and Republican politicians and campaign officials. The series is moderated by Steven Pearlstein, Robinson Professor of Public Affairs and Pulitzer Prize-winning columnist at the Washington Post.

Hart devoted his talk to discussing his history in polling, the role of the pollster and the 2020 election before answering questions from students.

After working for Lou Harris in 1964, Hart established Hart Research in 1971. Hart Research is a public opinion research company that works to “respond effectively to our clients’ objectives and to offer clear insights about both the state of things today and where things are headed in the future,” according to hartresearch.com. Hart has been a pollster for NBC News and the Wall Street Journal since 1989, and is part of their election night coverage every four years.

Hart walked the audience through how the role of the pollster has changed in recent history.

“During my era, which started in 1970 through 2000, pollsters were usually the first voice in the media. The candidate would start the meeting with the pollster to lay out where the public was at. Looking at pollsters today, in terms of the Biden campaign, the title behind the name is Chief Strategist, [and] the role of the pollster has changed from just delivering numbers to the person that is considered the one who is going to shape things,” he said.

Pearlstein challenged this, asking if campaigns were strictly poll-driven due to the increased importance of polls.

“Every campaign is a reflection of the candidate, so the pollster brings a set of findings but the candidate is the type of person who is going to take that info and shape it in their own kind of way,” Hart responded.

Hart continued, explaining that politicians interpret polls in different ways: Some will see the responses and decide a way to get to where the constituents are, while others will look at the data and find things in their platform to emphasize.

“[Being poll-driven is] a charge that’s always been leveled against pollsters, but at the end of the day, campaigns are a reflection of the candidate. The [Donald] Trump campaign is totally driven by Trump and not the numbers,” Hart said.

Hart continued that he was currently doing work with focus groups to begin to gauge public opinion concerning the 2020 election.

“Polls are the tongue depressors of American politics, it tells you the most basic things about where people are at. But when you do a focus group, it’s more like an EKG bc you can really see inside and understand,” he said.

Polls can be misinterpreted because one can look at the wrong thing and because the numbers are reflective rather than predictive, and in every poll there is a margin of error, Hart explained.

In terms of an electoral race he said polls “give you a temperature, not what it’s going to be in the future.” Hart further said that we do not know a lot about what the public thinks about Democratic nominee Joe Biden. Hart explained that the current polls tell us a lot about Trump: “The first poll that is going to be of significance to me is after the first debate, because then we will really understand the feel of Biden.”

Hart expressed his concerns with Biden, though, stating that Biden’s current position is not enough to win the election. But he also explained that Trump will have a big challenge with the significant percentage of voters that feel uncomfortable about voting for him. According to Hart, only about 39 percent of voters are very enthusiastic about voting for Biden, so it will be the goal of the Trump campaign to degrade Joe Biden and his vice presidential candidate Kamala Harris.

Pearlstein then questioned if there would be larger numbers of people voting by mail, and whether or not that would impact the timeliness of results on election night.

“If you are part of election night coverage, you have one goal and that is not to make a mistake,” Hart said.

He explained that states that are always red and blue will be called quickly, as the data will be accurate and outside the margin of error, but in swing states, the network will hold back on calling. “What you will have learned by 10 p.m. [on an usual election year], you will not know when they go off the air at 4 a.m,” Hart said.

The 2020 election will be “a true test for democracy,” Hart said, explaining that even if the numbers are not fully in on election night, Trump may declare himself the winner, which the Democrats would fight. Hart further stated that, based on early voting, Biden supporters will largely vote by mail, possibly skewing election night results to the right.

The influential states in this election are “much like 2016,” Hart said.

“I’d go to the upper midwest starting in Wisconsin, and go through Pennsylvania,” he explained. There are also indicator states that will show how each party is doing. Hart highlighted the possible repercussions of a Trump loss in Florida, saying that “there is no set of numbers that will bring him back and allow him to be competitive.” He also highlighted the importance of North Carolina, Nevada, Arizona, Colorado, New Hampshire and Michigan.

“If that [North Carolina] comes in close or if Biden wins, then that’s an indication that Democrats are doing well,” Hart said. “For the [Democrats], if they lose Colorado, that’s a bad indicator for them, and I would say that New Hampshire would be another bad indicator. And the same in those midwestern states, and the most important of those states is Michigan, if they go for Trump, it sends his message with blue collar workers is going well and people of color did not turn out the way they needed to.”

One student asked how the ongoing COVID-19 pandemic would affect the 2020 election. Hart explained that public opinion is more concerned with public health than the economy. If those numbers begin to change, then that is helpful for Trump, but if public health remains a concern, then that is worrisome for Trump.

“Trump needs something that looks or acts like a vaccine. The more people are concerned about the health elements, the worse it is for Trump,” Hart said.

Another student questioned Hart on the begrudging support for Biden coming from the left.

“Yes, the ability to generate excitement is important and clearly [Barack] Obama did that, and so did Trump … but George H.W. Bush did not and he was president,” Hart said. “What’s generating 80 percent of the votes is Trump, you like him or you hate him. Joe Biden[‘s] excitement quotient isn’t what it’s about, it’s his acuity: Do voters feel he is up to the job? Trump people are trying to undermine that, people say he’s not up to the job, but Trump is a liar, but he is an incumbent and there is an additional step for Biden. Look at the polls after the first debate to see if he has gotten over that hurdle.” He continued, expressing concerns about the turnout of young voters and people of color, and the difficulty with voting absentee.

The “First Tuesday” lecture series will continue each Tuesday at 9 a.m. from Tuesday, Sept. 15 through Tuesday, Nov. 10.

Republicans should rethink their stance on qualified immunity